Road Trip from Kuala Lumpur to Phuket via Krabi

“Are you sure you could drive all the way from KL to Phuket?” Many friends thought I was insane to ever think of taking such a long overland trip. “It’s the journey and not only the destination that counts. If you take a flight, you will miss out a lot of scenery and the fun. It’s like life, you don’t want to reach your END destination too soon” I retorted.

I have been planning to visit Phuket during the Vegetarian festival for years but the trip never materialize due to work commitment. With another week or 2 to go before I start another 2-year contract with a Bank, I manage to convince my wife and a friend, Kenny’s and his wife to drive to Phuket from KL during the long Idul Fitri holdays. Kenny and I have driven from Phuket to Ranong before and we are comfortable with driving in Thailand.

1 October, Kuala Lumpur – Krabi
We left KL on at an ungodly hour of 2:15 AM hoping to arrive at the Sadao immigration at 9:00 AM before the crowd built up. Our Malaysian-made 1.6 Proton Gen2 sedan did quite well despite of unrelenting rains along the PLUS highway.

Surprisingly, the border was not crowded despite of the holiday season. The Thai Immigration officers in Sadao have the notorious reputation of asking for “overtime charges” of 10 bahts or 1 Malaysian Ringgit from each visitors entering and leaving the Kingdom. My usual response is to use my thumb and point to the back. Not that I don’t believe in Dana, but paying a bribe is a totally different matter. There are runners for Immigration officers to help some impatient tourist to stamp their passport at 100 bahts.

The rain stopped chasing us after crossing the Thai border and with day beak driving became a breeze. Our plan was to stop at Krabi for a night before moving on to Phuket. Although I have been to Krabi, the rest have not. It was no mistake to drive to Krabi. We stopped at Tesco-Lotus just before Krabi town for MK suki lunch. Met a friend from Malaysia with his elder brother who is a Thai national for more than 30 years and he owns and operates a factory.

In my previous trip, the Minivan took me straight to AoNang beach bypassing the town. With a car, I can drive to other beaches and the town and market. My previous impression on Krabi was entirely formed in AoNang beach and I had ill-advised my friends before about Krabi. That reminds me of The Blind Men and the Elephant by American poet John Godfrey Saxe. Kenny could not stop laughing at me for telling him that Krabi is just a small beach town with a few streets before the journey. 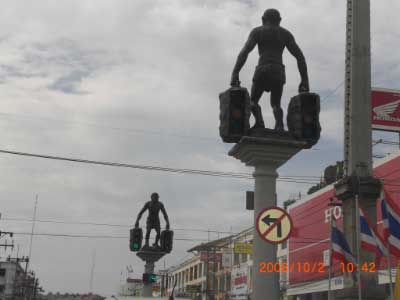 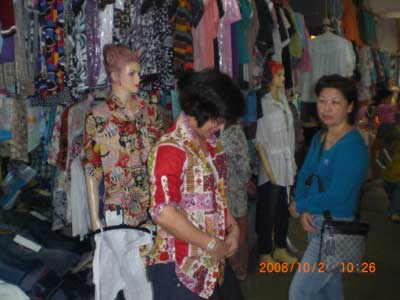 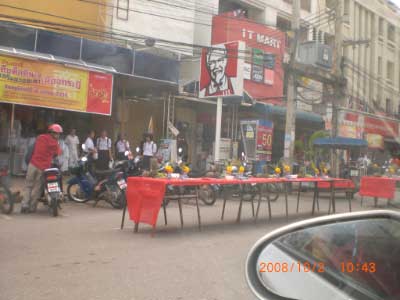 Krabi Town & MarketWe stayed in Ao Nang beach Resort http://www.aonangbeach.com/aonang_beach.html The small bill board says that the rate is 700 Bahts. It is just another scam to get tourists in first and the boss will talk you into going for a deluxe and more expensive room. And if you insist, then she will show you a small room. We settled at 800 bahts per night for a deluxe room with breakfast for 2 thrown in. 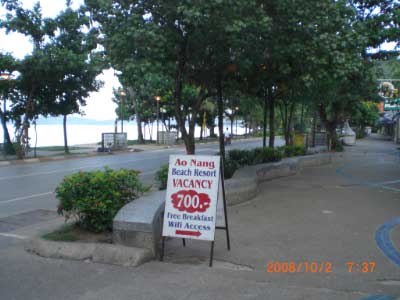 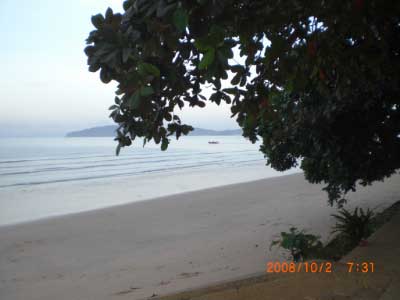 The hotel is quite convenient as it along the beach. The air conditioner and breakfast were letdowns though. After dinner, we took a stroll before going for a foot reflexology massage. Met a chatty Malaysian by the first name of Michael from the Northern state of Kedah who told me about how Malaysia lost millions of foreign exchange to Thailand as the border states male will head for the border town of Sadao or Haadyai every weekends to spend their hard-earned money. I guess he is speaking the truth based on his own experience.

2 October, Krabi – Phuket
I am an early riser, perhaps due to age. In the morning while sauntering along the main road facing the beach, I found 2 Malaysian tour buses parked in one of the hotel. Chatted with the driver and got some contacts for information.

Back to Hotel and had breakfast with my travel mates. The buffet breakfast is just OK. Chatted with 2 Indonesian tourists who stayed in the same hotel. My Indonesian language is getting bad since my sojourn in Jakarta in 1996. Tanned on all the exposed parts of their body, these 2 gentlemen and heading for island snorkeling after breakfast.

The drive to Phuket was as uneventful as the drive to Krabi. On the way, there are temples having vegetarian festival celebration. I took some photos of the festivity in one of our stops.

As I had been to Phuket about 2 weeks just after the Tsunami devastation, I gave some first-hand account to my mates of devastation and where the bodies are kept near the Wat.

The Chinese restaurant in town that I used to patronize was closed for vegetarian festivals so we headed for Patong beaches for lunch and accommodation. Stayed in Sand Inn at 700 Bahts sans breakfast. The place is convenient but the noise and pollution can be quite bad. http://www.channels.nl/27060b.html Sand Inn is just next to the complex that houses Carrefour and Robinson. The ladies had endless fun looking for bargains. A bar nearby in the opposite soi was serving all brands of small bottle beers at 60 Bahts. With beer bottles in their hands, most customers are sitting and watching endless herd of tourists passing by. There were some VIP visiting with TV coverage and some of us were caught shaking hands with the VIP.

3 October, Phuket – Trang
As breakfast was NOT included in Sand Inn stay, we headed for Karon beach and hope to grab something to eat along the beach. In one of the hotel, we had Buffet breakfast at 200 Bahts per head. The quiet Karon beach was quite an experience and a welcome change.

While we were in Krabi, I was told that Trang has second largest vegetarian festival after Phuket (Those in ChiangMai will dispute), so we took a slight detour to visit Trang. Although I have been to Trang 2 times, I did not visit Rachada Khaw Sim Bee Na Ranong memorial park in Trang. Khaw Sim Bee Na Ranong, the governor of Trang, was the son of Khaw Soo Cheang Na Ranong who was the founder and governor of Ranong. You can read my blog on Ranong and Khaw Soo Cheang in http://www.thai-blogs.com/index.php/2005/08/10/ranong_aamp_victoria_point?blog=23

Khaw Sim Bee Na Ranong was responsible for bringing in rubber from British Penang into Trang. I have a friend in Trang whose family owned many rubber estates. The family were from Perak in Malaya and they were not allowed to own land due to race-based restriction, so they moved to Thailand and made it good in Trang. By the way, there is a small road in Penang known as “Khaw Sim Bee Road”. You can read more about him at http://en.wikipedia.org/wiki/Ratsadanupradit_Mahison_Phakdi 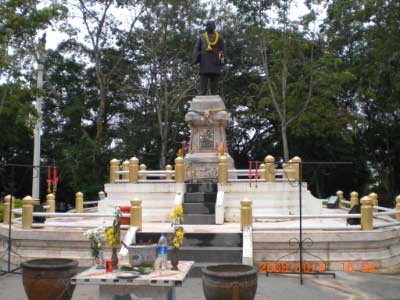 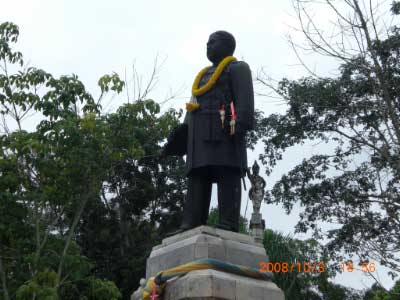 4-5 October, Haadyai – Kuala Lumpur
There were NOT much to see in Haadyai although the Tourism Authority of Thailand (TAT) has put in a lot of effort to revive the tourism industry. I was told by my Tour agency friends that TAT has spent 4 Million bahts to spice up the Vegetarian festival for the tourist. The procession is held twice a day when I was there. Once in the morning and one in the evening. 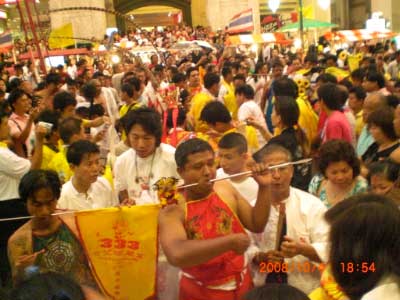 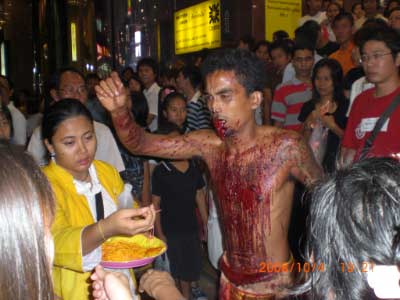 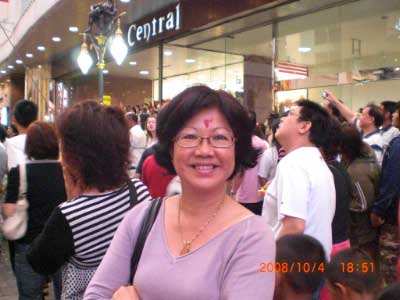 The evidence that this festival has Hindu influenceEat-shop-Massage-eat-drink-sleep is about all you will do in Haadyai.

Expecting a huge crowd at the border crossing, we left immediately after breakfast for the border. The drive back to KL was intermittently slowed down by accidents along the PLUS highway. After stopping at Kenny’s home town for a Chinese dinner, we arrived safely at around 7:00PM in KL.

We had escaped the crushing chill of northern Europe and were lapping up the simple beach life, far away from it all at Bamboo Bay on the southern tip of Ko Lanta.
Despite the tropical bliss after a week we felt the need for a little cosmopolitan action and had hitched a ride up to Ban Saladan where you can buy a newspaper, drink an ice-tea and check out the traffic propelling the tanned, the burnt and the lily-white from ferry to resort and back again.
Technically Ban Saladan is still just a village where the ferry docks ( Ko Lanta Old Town to the south-east being the administrative centre) but in reality it’s Ko Lanta’s tourist gold-rush town.
There is a building frenzy going on as it expands southwards along the beach road in order to cope with the thousands of tourists who come to enjoy the island’s golden west coast beaches.
It has the look of a town that’s been built in a hurry, signage bursts out over the busy main road in a haphazard, cartoon way (ATM! Dive shop!, Travel Agent! Pharmacy! Internet Café!)

But because Thailand is not a country of hustlers you can still sit and chat with the locals about the old days when 7-11 was the amount of hours they spent scraping a living.
While it sometimes seemed that the whole place was devoted to dealing with the Farang, we found a small piece that was intent on entertaining the locals.
In a field off the main road Ban Saladan’s Chinese New Year Festival was in full swing.
END_OF_DOCUMENT_TOKEN_TO_BE_REPLACED