If you have ever driven along the Friendship Highway on your way to Nakhon Ratchasima then you have probably noticed this giant cow. It belongs to Farm Chokchai which is in the heart of cowboy country in Northeastern Thailand. I now that sounds strange as we are not in America. Normally we think of rice fields and buffaloes roaming the countryside. Not cowboys on horseback herding cows around large estates. Farm Chokchai was started by Chokchai Bulakul back in 1957. The farm began with beef cattle but later turned their attention to a dairy heard. Today the farm covers an area of 8,000 acres and has 5,000 head of cattle. In recent years, the farm started their award-winning agro tours where people can learn about the running of a dairy farm which also includes hands on experience of milking a cow, making ice cream, petting farm animals and watching a cowboy show. I took Nong Grace there at the weekend for her first visit. The farm is open from Tuesday to Sunday. During the week they only have two scheduled tours at 10 a.m. and 2 p.m. However, at the weekend they have six rounds starting at 9 a.m. and the last one at 3 p.m. We were advised to telephone in advance to book a tour. You then have to turn up about 30 minutes beforehand to pay for it. As it turned out, we were over an hour early and were lucky to be able to change to an earlier time. Tickets cost 250 baht for adults and 125 baht for children. During the week it is slightly cheaper. Incidentally, foreigners and Thais are charged the same price. The tours start off with a short movie. Then you are taken outside to see the Machinery Museum where you can see the original vehicles used at the farm. Our guide only spoke Thai but there were signs in English. Our next stop was the Milking Parlor. Apparently, the Friesian cows have a high yield of milk and so they are milked three times a day. On my father’s farm, we only milked the cows twice a day. The milking procedure is fully automated with enough room for 192 cows to be milked at the same time. Our tour guide gave us a demonstration on how the machines work and also how to milk the cows by hand. If you are keen, you can change into some Wellington boosts and have a go at milking the cows. We were next taken into the Dairy Plant. This is where they produce four milk products: milk, yoghurt, ice cream and milk toffee. Interestingly, the brand name “Farm Chokchai” was sold some years ago so they call their milk products “Umm…milk”! In the dairy plant we watched a movie which showed us how the milk is pasteurized. We were then taken on a tractor and trailer ride to tour the rest of the farm. Each tour is limited to 80 people due to the size of these trailers. This part of the tour doesn’t have any English subtitles so you just have to admire the views of cows grazing in the fields and farmhands working the land. 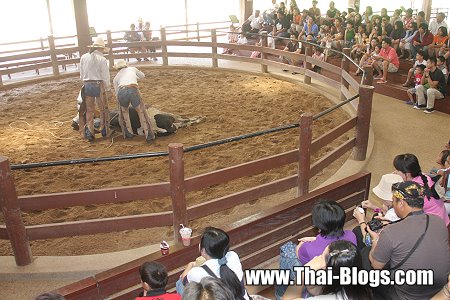 A short while later, we reached our first destination. A kind of Wild West Town.  In a small arena, we were treated with some stunts where a horseback cowboy lassoed a cow and then showed how they would then brand it. Another cowboy showed us tricks with a lasso and then one more impressed us with his dexterity with a gun. Afterwards, we had some free time to wander around. There are souvenir shops and shooting games to play. These cost 30 baht a game. For older children, there is a chance to ride a horse for 40 baht or to take your whole family on a horse and cart ride for only 100 baht. Unfortunately for Nong Grace, there wasn’t much for a 7 year old girl to do. A little while later, were back on the trailer to continue our tour. A short distance away we paused by the side of the track to see a demonstration of how a sheep dog can successfully heard sheep into a pen and then up into a truck. We then moved on to our last and final stop. This was the petting zoo and animal show. This is a great place for the younger family members. They have smaller ponies here for the younger kids to try their hand at riding. In the petting zoo you can buy food to feed the animals. Here they have some camels as well as some deer and rabbits. You can also give some milk to the baby calves. Nong Grace obviously loved the final stop as she could finally ride a pony and also feed the baby animals. She also enjoyed the animal show. In fact she enjoyed the whole day out even though it took us over two hours to drive here from Bangkok. My only complaint is that they put all of the activities for younger kids at one place. This meant that Nong Grace was rushed to ride the pony and feed the animals once she had finished watching the show. They should have had the pony ride at the first stop where she didn’t have so much to do. I am not sure if foreign tourists would find Farm Chokchai of interest as it isn’t what you see as “traditional Thai”. However, the highlight of any stop here is the Chokchai Steakhouse which had the best steaks I have had in a long time. Whenever I drive to Khorat for a holiday, I always stop here on the way home. I think the tour itself is of more interest to Thai families and expats living in Bangkok. However, if you are on your way to Khorat then it might be worth a small stopover. They even have a boutique camp where you can stay the night in “tents”. If you do this then there are more activities that you can take part in including ice cream making.

Visit farmchokchai.com for more information, We have more ideas for excursions from Bangkok over at Bangkok-Daytrips.com

This entry was posted in Bangkok Day Trips, Nakhon Ratchasima. Bookmark the permalink.

One response to “Day Trip to Farm Chokchai”