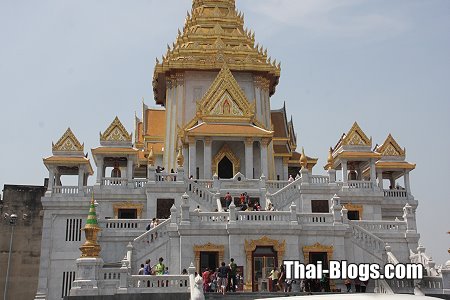 The Golden Buddha at Wat Traimit, on the edge of Bangkok’s Chinatown, has been the highlight of many guidebooks for quite a few years now. It is certainly regarded as one of the main sights in Bangkok as it is included on the “City Temple Tour” that many people take if they are short of time. I was last here back in 2007 (see The Golden Buddha) and things have improved greatly since that time. The main difference is the completion of the Phra Maha Mondop which is a four storey Thai style pavilion with a golden spire on top. It formerly opened to the public just over a year ago. It was built to honour the 80th birthday of H.M. The King. 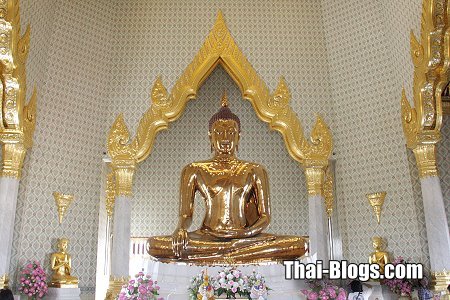 When I last visited, the Golden Buddha was housed in a small building towards the back of the temple complex. Now it has pride of place on the 4th floor of this magnificent mondop. If you didn’t know already, this 700 year old Buddha image is listed in the Guinness Book of Records as the largest solid gold Buddha image in the world. What is most interesting about its story was that up to about 60 years ago no-one knew how valuable it was. This is because for hundreds of years it had a plaster casing. It was only when it dropped and cracked while some workmen were moving it to a new location did people realize that it was really made of gold. Today it is valued at 1.5 billion baht. 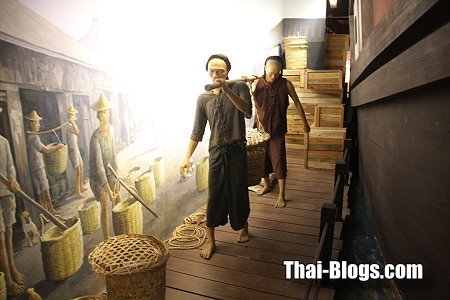 For me the most interesting part of this mondop are the two museums that can be found on the 2nd and 3rd floors. The one on the third floor gives you the story of the Golden Buddha image through the use of multimedia. But, I found the Yaowarat Chinatown Heritage Center to be more interesting. This costs 100 baht to enter but there is a lot to learn here as you journey aboard a junk from China on its way to Siam. The first room features an old man telling his grandson about the founding of Chinatown. You then walk from room to room learning about the commercial district of Sampeng and the emergence of the importance of Yaowarat. All of the signs on the displays are bilingual and you could easily spend an hour here. 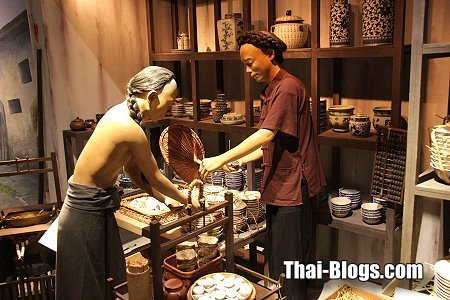 Wat Traimit is a good place to start before exploring Chinatown beyond. You can get here easily by taking the subway to MRT Hua Lamphong. From there it is only a short ten minute walk to Wat Traimit. The Chinese Gate which marks the start of Yaowarat Road is just beyond this point. I was here last weekend and it took me just over an hour to walk the complete circuit up Yaowarat Road and then back along Charoen Krung Road to my starting point at the Odeon Circle. The Golden Buddha costs 40 baht for foreign tourists and the Heritage Center is 100 baht. The museum is open 8 a.m. to 5 p.m. Tuesday to Sunday.

Map showing the location for The Golden Buddha on the edge of Chinatown:

2 responses to “Phra Maha Mondop and the Golden Buddha”