A Walking Tour of Red Camp 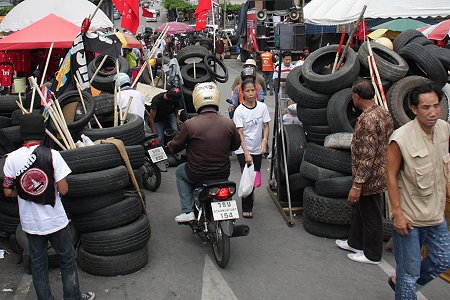 “Welcome to Red Camp. Please have your passports ready and your bags for checking.” For those who have ventured to the Ratchaprasong Intersection in Downtown Bangkok recently, you will know it is like entering a foreign country. It actually reminded me of that great British Ealing Comedy “Passport to Pimlico”. They are very self-sufficient with their own canteens, medical centers, security forces and even a place of worship complete with monks. In addition there are numerous vendors there catering for all their needs. Whether it be a massage for weary feet or a battery charging service for your mobile phone. 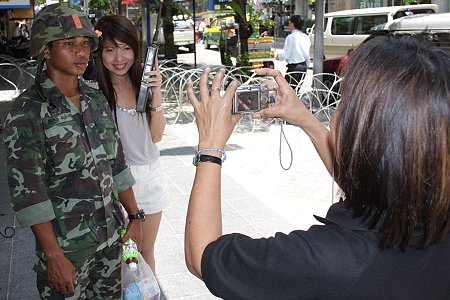 I don’t want you to get the wrong impression that I am going to advocate here the so-called “Demonstration Tourism”. But, the fact of the matter is, it is happening already. And not just Thai people but foreigners as well are venturing into Red controlled areas of Bangkok to soak up the atmosphere and to take pictures. Quite a few tourists and local people headed down to Silom to take pictures of the soldiers or to stand by them while a friend took their picture. Other popular pictures now appearing on Flickr and other social media include pictures of riot police in full gear, razor wire strung along sidewalks and of course fully armed Thai soldiers. In fact, Thai people seem to prefer having their picture taken with the soldiers than the policemen for some reason. 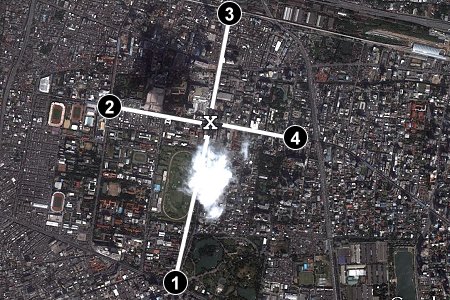 The Red Camp is presently covering a very large area going the four directions from Ratchaprasong Intersection as you can see from the satellite picture above. X marks the spot where you will find the main rally stage in front of Central World, Thailand’s largest shopping mall. Well, it was but it has been closed down for the past few weeks together with the other biggest mall Siam Paragon. To give you an idea of distances, it is 1,000 meters West to the intersection at MBK. It is 530 meters North to the Intersection near Pratunam. It is 780 meters East to the Intersection at Phloenchit. And it is a whopping 1,695 meters to the Intersection at Sala Daeng. They have also taken over parts of Lumphini Park. 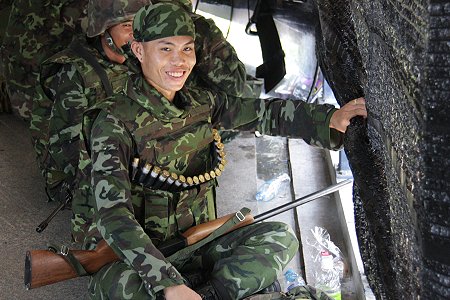 Before I proceed with this walking tour of protest sites, I again want to emphasise that I am not advocating that you actually go. And that if you do, then you do so at your own risk. However, in my personal opinion, the danger during the day is low. As long as the soldiers are not massing then you shouldn’t face any problems. I have already been a number of times and will most likely go again tomorrow. I am not a thrill seeker and will most definitely leave at the first sign of danger, but up to now I have been met with nothing but kindness and warmth from the Red Shirts. This is an historic event and I don’t want to miss it. 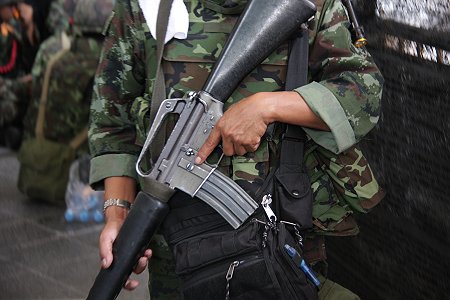 I would suggest that you start the tour by taking the underground train to MRT Silom or skytrain to BTS Sala Daeng. Here you can walk up and down Silom road taking pictures of the soldiers and police in riot gear. The razor wire across the sidewalk make a good picture. I didn’t notice many police or soldiers on the streets when I came here the other day, but then found hundreds sleeping in a multi-storey car park. You will also find soldiers and police resting down many of the side streets. If you see any demonstrators massing then I advise that you leave the area immediately. I have seen on television “demonstration tourists” stopping to take pictures of clashes between police and red shirts. Not a good idea at all. 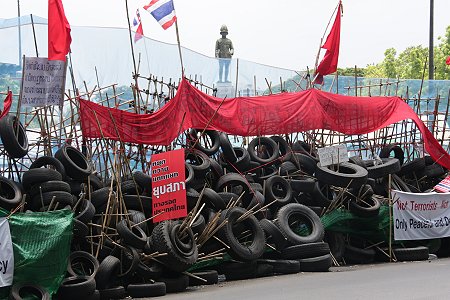 The main “tourist attraction across the road from Silom is of course Red Fort with its stacked tyres and bamboo poles. In the background you can see the statue of King Rama VI that guards the entrance to Lumphini Park. When I was there a couple of days ago the strong barricade stretched across the width of Ratchadamri Road blocking all car access. However, they have since opened a part of it to allow emergency access to Chulalongkorn Hospital which is on the corner of this intersection. As a pedestrian, you can walk in from the side of the hospital or walk down a bit to the MRT exit for Lumphini Park. However, you cannot exit into Red Camp here from the MRT as the gates are locked. 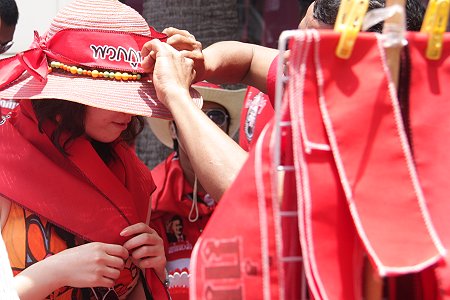 It is quite a long walk up Ratchadamri all the way to the intersection at the Erawan Hotel. If you don’t feel like walking this long stretch then you can take a motorcycle taxi near Chulalongkorn Hospital for no more than 30 baht. Along the way you will be able to see all the tents and shelters down the middle of the road. There are several thousand people along this one road alone. They don’t need to stay at the stage area to listen to the speeches as there are speakers all the way along each road. There are also toilets, showers and even generators so that they can have electric fans. There are a few places along here when you can buy VCDs of the April 10 clash for about 30 baht. There are also stalls selling red shirt souvenirs. In this picture, a foreign tourist is buying some souvenirs. 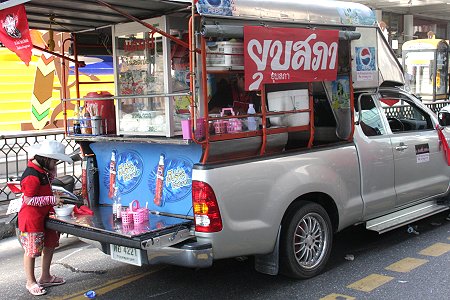 You won’t be short of food and refreshments. In theory, you could line up for the free food being handed out. I was invited but declined for obvious reasons. There are many vendors selling food and it is better to buy from them. However, one of the Red Guards did offer me some cold water that I gladly accepted. There is quite a variety of food here which reflects on the number of different regions the protesters come from. Maybe my next blog should be the “Good Food Guide to the Red Camp”. There are not so many people during the days but in the evenings the vendors and small shops all do good business. 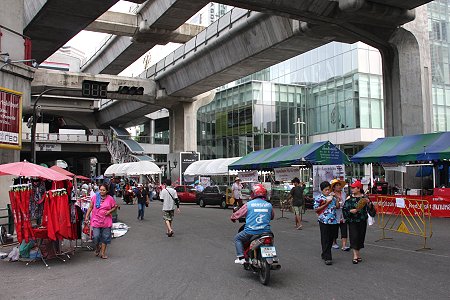 This is a picture showing the area in front of the normally very busy Siam Paragon. Although the big shopping malls are all closed, you will find that most of the smaller shops in Siam Square are still open. In addition, there are many street vendors who have come to the area to take advantage of the roads being closed. Sometimes it reminds me of the temple fairs as they close the streets down too. The nearby MBK is the biggest mall still open as normal with thousands of shoppers. This is the best place to go for an air-conditioned break. The shrines around the protest site are still open and when I was there I saw a few worshippers. For example, you can visit Erawan Shrine, Indra-Indhor, Genasha and Trimurti. 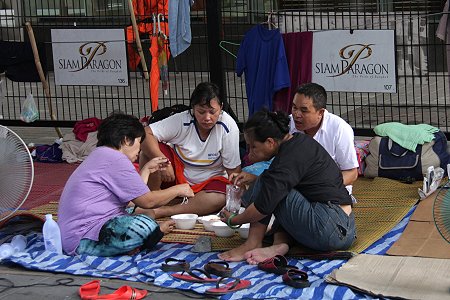 Before you set off on this walking tour, you need to make sure that you are up-to-date with all the latest news. In addition, I would advise that you take along a smartphone as you will get instant updates from people if something is happening. You can follow me on Twitter @RichardBarrow for the latest news on the red shirt protests. I will be writing soon about the “backstory” of how people like myself are “reporting” live from the red shirt protest sites. In the meantime you can view my Twitter Archives and my Mobile Blog both of which I update from my smartphone. I also have a google map of the Protest Sites.

If you do go, and many people are going every day, then remember, don’t take any unnecessary risks and leave the area immediately if you see any signs of trouble. The protest site is serviced by three sky train stations at BTS Siam, BTS Chidlom and BTS Phloenchit.

11 responses to “A Walking Tour of Red Camp”