Armed and Dangerous in Silom The Thai army have now declared their willingness to use live fire in defending Silom from the Red Shirt protesters. They are deadly serious about this issue. The Reds seem to know it as they have called off today a march to Silom. This morning I visited the Sala Daeng Intersection to see what was going on for myself. On a pedestrian bridge closed to the public, Thai soldiers were hiding behind a black net quietly observing the movements of the Reds. 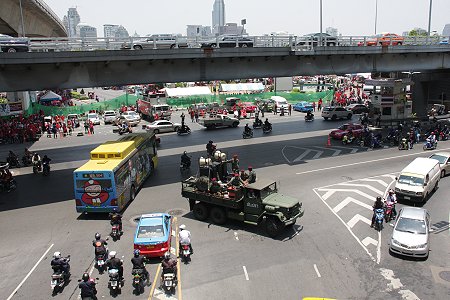 This is the view from the vantage point of the soldiers. Here we can see down to the intersection and Lumpini Park beyond. You can just see the green netting which is blocking the Red’s own barricade. This afternoon they built a wall of bamboo sticks sharpened at one end. In the foreground is the army’s sound truck blasting their own music back to the Reds. This shows the soldiers protecting the approach to their base on the pedestrian bridge. These soldiers are armed and dangerous. They had M16 and shotguns. It wouldn’t be wise for a tourist, drunk or otherwise, to attempt to come up this ramp tonight. The soldiers had cut holes in the black netting in order to have a clear view. When the shooting starts, they will lie down here with only one sandbag protecting them as they fire live rounds at the Red Shirts. From this angle they will easily pick off the red shirts. It will be a slaughterhouse. Along the sky bridge I came across many more soldiers who were resting or sleeping. One was even checking for latest news on his Blackberry. Back at ground level, there were more soldiers and riot police on duty. This passerby was asking the soldier if these bullets were real. He said yes. He explained to us that there were 9 metal pellets in the cartridge and that it was designed to spread out as it was fired. He said it would be very effective in stopping dead any red shirt that tried to attack him. They are all the same but some are in upside to show the public the contents through the clear plastic covering. Despite all of this, life still goes on at Silom. People were still shopping and businessmen rushing off to meetings. However, Silom is effectively being occupied now by the Thai army. Today I was posting pictures and tweets live @RichardBarrow and also my moblog at www.mythailandblog.com. In addition, you will find pictures of my walk from Ratchaprasong to Sala Daeng over at www.paknamphotos.com.

9 responses to “Armed and Dangerous in Silom”