On Sunday, we went for an enjoyable bicycle ride in Bangkok. At first glance, this would sound like a crazy idea. But, it is amazing that after only a short boat ride across the Chao Phraya River, we were surrounded by lush green vegetation and almost complete silence. In fact, for most of the 25 kilometre route we cycled through jungle, along canals and down some side roads. There were only a few stretches that ran along major roads. The area that we visited has the nickname of “the lungs of Bangkok”. Due to a giant loop in the river this area is virtually cut off from the mainland and access is limited. The only way to go there by car is over the bridge at the southern end. This crosses a short-cut canal which is centuries old. From Bangkok you can cross the river by boat from the Klong Toey Port. There are many companies in Bangkok that can arrange cycle trips for you. You can easily find most of them by doing a quick google search for “Bangkok bicycle tours”. We decided to go for Recreational Bangkok Biking. They are a very professionally run organization with quality bikes and talented guides. I was impressed with the information on the website and also the managing director, Andre Breuer, who quickly answered all of our inquiries. We decided to go for their “Colours of Bangkok” tour which runs twice a day at 8 a.m. and at 1 p.m. Unlike some of the other tour groups, Recreational Bangkok Biking limit tour groups to only eight. It is advisable to book in advance so that you are not disappointed. In theory, it does sound that the morning session would be cooler, but really, in Thailand, it is already maximum temperature by 8 a.m. So, just go at a time convenient to you. In fact, if you go in the afternoon you might find yourself with a smaller group. The tour guide we had was called Mon and her English was excellent. In our group we had the full number of eight people. Andre gave us the briefing first telling us that we were about to see a side of Bangkok that not many tourists have ever seen before. He wasn’t really exaggerating. The tour would take us to Bangkrachao in Phra Pradaeng District of Samut Prakan. I have explored this area half a dozen times already. But it was like I was seeing it for the first time. Going by bicycle not only lets you see things from a different viewpoint, but it allows you to go down narrow lanes and canal paths that aren’t possible for cars. After the briefing, Mon helped us choose a bike and gave us some instruction on how to use them. It should be noted that these are not cheap bikes bought from Tesco Lotus. They are heavy duty bikes which are both comfortable and easy to ride. Before you set off on the tour you should take the time to familiarize yourself with the bike and gears and to make sure everything is in good working order. Once were all ready, Mon led us off for our tour which would last about 4-5 hours. It may sound daunting to cycle for so long, but really, it is all flat in Bangkok and so you don’t have to be a sportsman to join this tour. It was really easy going. We had regular breaks where Mon would buy us some drinks. I couldn’t believe that after we got back she told us that we had cycled 25 kilometres! That just shows you how comfortable the bikes were. The office for the bicycle company is down a small lane off Rama III Road. Fortunately for us, Mon knew some back lanes so we were able to avoid the busy main roads for most of the time. We did have to cross the busy Rama III Road at one point in order to get to the boat, but luckily there was a subway under the road. At one point, Mon took us through some slums. Here, like in other places in Thailand, it is always amazing how people in mansions can live right next to slums. There is no segregation here and everyone lives in harmony. In the slums everyone was very friendly as we passed by down the narrow lanes. The kids shouted out “hello” or wanted to give us a high five. 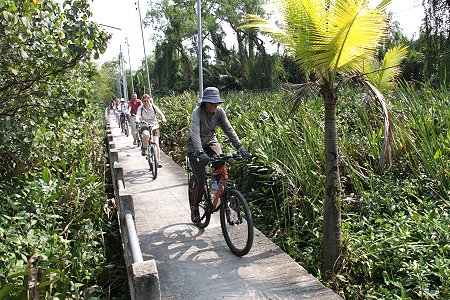 One of the things that I was impressed about this company is their sterling efforts in giving back to the communities that they visit. In the case of the slums, they help sponsor one of the schools there. Over the years, they have helped to raise millions of baht in donations. They also use the services of people along the route, whether it is buying drinks or snacks or hiring a boat. This is responsible tourism at its best with a very low carbon footprint. After the slums, we ended up at the river where our bikes were loaded onto a boat for the crossing to the jungle on the other side. I always enjoy boat roads as it provides natural air-conditioning and grand views. Once on the other side we were back on the bikes and heading down narrow lanes and along raised concrete pathways that passed through banana trees and nipa palms. Our first stop was the hidden oasis of Sri Nakhon Khuankun Park. This is a lovely park tucked away in the middle of no-where. There is a lake here where we fed the fish. If we had time, we could have also rented a boat on the lake. From here we continued our journey around the artificial island. Our pace wasn’t very fast and Mon allowed us to stop to take as many pictures as we liked. She even took us to an old temple and explained about the different buildings and Buddha images. Lunch was pad thai (stir-fried noodles) at a river-front restaurant. This meal and all the drinks were included in our package price of 1,000 baht which I think was really worth it. Although you could come to this area with your own bikes, it would be advisable to join a tour for the first time to see what the place has to offer. It has certainly opened my own eyes to this region and inspired me to think about buying my own bicycle. There are definitely more areas to explore which you would need to do with a sense of adventure. This is because there are no maps and few signs. It would be easy to get lost without a guide. Obviously if you are in Thailand for a short time or even an expat, it is not always practical to have your own bike. You might want to consider taking one of their other tours. After all, a quality bike like the one I used on this tour would set me back nearly 25,000 baht. It would be cheaper to pay 1,000 baht for a tour or maybe rent a bike from them which costs from as little as 250 baht per day. I really enjoyed my morning on this tour. I was a bit tired by the end of the trip but I had already decided that I would love to join them for another tour in order re-discover another area of Bangkok. Bicycles certainly allow you to see familiar streets in a different light.

More information can be found at their website www.bangkokbiking.com. I have also posted more pictures in our Samut Prakan Photo Album over at www.paknamphotos.com.

5 responses to “Bicycle Tours in Bangkok”