Boat Parade on Gulf of Thailand One of my favourite festivals in Thailand is undoubtedly Luang Phor Pan Worshipping Festival in Bang Bo District of Samut Prakan. I went last year for the first time and had no idea what to expect. There were so many surprises that I had a really great day. I went again this morning fearing that it wouldn’t be special any more. However, it still was as fantastic and intense as ever. The highlight of the day is the boat parade out into the Gulf of Thailand. Literally hundreds of boats of all shapes and sizes followed the vessel carrying the image of the revered monk Luang Phor Pan. Once out there we did a massive “wient tien” which involved going around in circles three times lasting about forty minutes. Luang Phor Pan was a revered monk at Wat Mongkol Kothawas in Klong Dan Sub-District during the reign of King Rama V. He was famous for his meditation techniques. Although he died nearly 100 years ago, he is still worshipped by the local people. We had to get up very early this morning in order to get to the temple on time. We arrived there at about 6.30 a.m. thinking that we were early but it looked like many people had already been there a long time. Some were sitting on the temple floor praying and others were lighting joss sticks and sticking gold leaf on the images of the Buddha and the monk. The air was thick with smoke. Not long before 7 a.m., the sound of a Chinese Dragon dance signalled that the Governor of Samut Prakan had arrived. There were brief speeches first by the City Mayor and then the Governor, a large gong was banged and the image of the monk was then carefully lifted aloft and carried out of the temple. The auspicious time was now 7.09 a.m. Outside were hundreds of people waiting to pay homage to the monk. The pallbearers almost had to fight their way through the crowd to the waiting boats on the nearby river. The Governor went onto a barge together with the image of Luang Phor Pan and nine monks. They would be chanting for most of the journey out into the Gulf of Thailand. The barge was pulled by another boat that was full of other people. As this pulled away to lead the parade, another large boat pulled in and I quickly jumped on board. It was an open-decked boat with no seating, no shelter and very low sides. We now set off to be part of the parade worshipping the revered image of the monk. There were about five or six boats that left the temple. However, along the way there were dozens, if not hundreds, of other boats. Some only had half a dozen people on board while others had at least a hundred if not more. There were also people on the banks waving to us. We passed a fleet of fishing boats that were moored and off-loading their fish. A few of them also joined us for this merit-making water parade. By the time we reached the open sea twenty minutes later there was quite a large flotilla of boats. It was really an amazing sight and a wonderful atmosphere that is difficult to capture in still images. On my boat were the Chinese dragon dances so we were accompanied all the way by banging drums and crashing symbols. I shot some video of all of this which you will be able to watch on Paknam Video Blogs. We went about three kilometres or so off-shore to a point where we started to do a large “wien tien” three times around an imaginary point. Everyone was following the barge carrying the image of Luang Phor Pan. Whilst this was going on, monks on that barge were chanting and consecrating sacred water which would be used later to bless the local people. We seemed to be going around in circles forever. I tried to count the boats taking part but I lost count after one hundred. There were also a dozen jet skis. About forty minutes later we had finished going around in circles. Then there was a mad scramble for each boat to get a small flag with an image of the monk and sacred writings. These were being handed out by the barge with the monk’s image. They used a long pole but still it was chaos as everyone wanted to get a flag for their boat. Luckily, even though we hit a few boats, there were no serious incidents and we soon headed back to shore. We finally arrived back at the temple nearly two hours after the start of the festival. The time had gone quickly but I felt exhausted; as if I had already experience a full day. However, this was far from being the end. Waiting for us on the banks and along the road were literally thousands of people waiting to pay homage to the image of Luang Phor Pan. The image was carefully carried off the boat, through the crowd, and onto the back of a truck that had been beautifully decorated. The monks climbed up with it and then it set off for the next parade. This time, on land around the city. However, the way ahead was blocked by literally hundreds of motorcycles. I walked back up towards the main road where I discovered that there was a bottleneck where all the motorcyclists were waiting to receive little red or yellow flags much the same that was given to the boat captains. This was a kind of reward for taking part in the parade as they were handing them out to all the drivers. 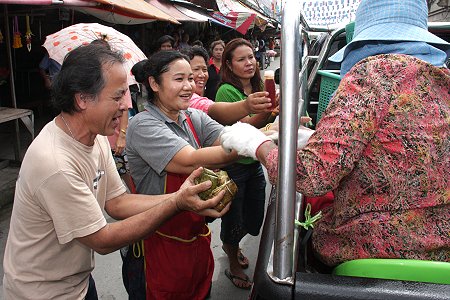 I waited near Klong Dan Market for the parade to approach. The monks on the back of the truck were chanting and two monks on either side were sprinkling the local people with the sacred water that they had prepared earlier. Hundreds of people were lining each side of the narrow road to receive the blessing from the monks. Everyone was in a joyful mood and several people kept offering me food. Last year I just put it down to the local people being so friendly to strangers. However, I knew this year that this was a major part of the parade. The hundreds of pickup trucks and cars following on behind were handing out food and drinks to everyone who had just been blessed by the monks. Some people reached out their hands while others had baskets. People were handing out food cartons, ice cream, Thai desserts and drinks. It was really amazing the scale of generosity of the local people taking part in the parade. The truck carrying the image had long since gone but the queue of vehicles stretched as far as the eye could see. A local told me that it would take more than one hour for the parade to pass their shop. From this Soi, the parade turned left onto Sukhumwit Road and headed towards the border with Chachoengsao Province. I didn’t follow it this year as I remembered how bad the traffic was. I also wisely parked my car on the main road pointing towards Samut Prakan. As I drove home, I kept spotting groups of people waiting with baskets ready to receive food and drinks from people taking part in the parade. It reminded me a little of Songkran with people driving up and down in pickup trucks. However, instead of throwing water at the local people, here they were handing out goodies to them. This was such a great thing to witness and to take part in. I didn’t stop to watch as I knew that the parade wouldn’t reach Samut Prakan City until nearly 2 p.m. and it would be getting on to 4 p.m. when it finally returned to the temple. But, I knew that hundreds of others would be following the truck. We are posting news and information of all events and festivals in our province in advance over at the Samut Prakan Forums. Click here to see some more pictures of today’s event. We still have more to go this week which includes Loy Krathong Jay tonight and three Chulalongkorn Day ceremonies tomorrow. The Vegetarian Festival is still going strong and we will have the big Chinese Parade next Tuesday. So, plenty of pictures to share with you soon.

One response to “Boat Parade on Gulf of Thailand”