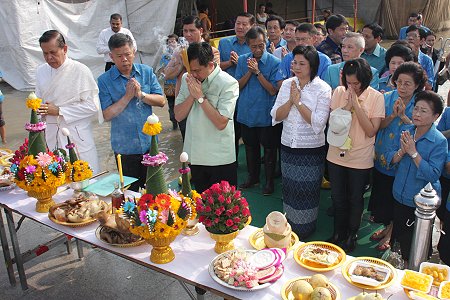 Mr. Surachai Khanasa, the Governor of Samut Prakan Province, took part in a ceremony this morning to announce to the Gods and Angles in Heaven that they will be holding the annual Worship Fair for Phra Samut Chedi. During the ceremony, they also sought good luck for the period of the Temple Fair which will take place for eleven days between 9th and 20th October 2009. They prayed for no rain and also for it to be incident free. They offered food and drinks to the Gods. The ceremony was presided over by a Brahman priest. 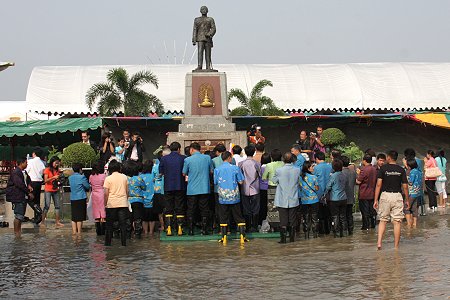 Ironically, due to a combination of high river levels and a high tide, the City Hall Plaza, where the ceremony took place, was under nearly a foot of water. The Governor and other government officials had to wade through the water wearing Wellington Boots. This picture shows the ceremony taking place in front of the statue for King Rama V. 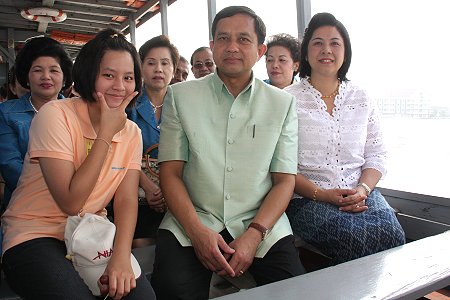 After the ceremony was finished, we all boarded a cross-river ferry to go to Phra Samut Chedi on the other side of the Chao Phraya River. In this picture, you can see the new Governor of Samut Prakan Province together with his wife and daughter. 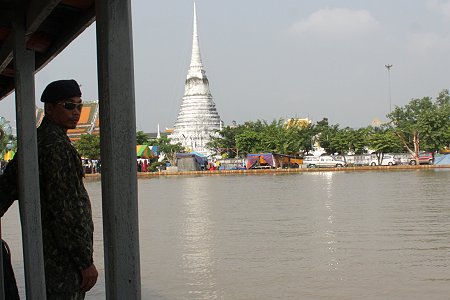 The red cloth that is normally wrapped around the Chedi has already been removed as you can see from this photograph. It is looking quite bare without the cloth. Now you can see that the temple badly needs whitewashing. However, this cannot be done without permission from the Fine Arts Department in Bangkok. A new red cloth will be wrapped around the Chedi tomorrow on the first day of the Temple Fair. 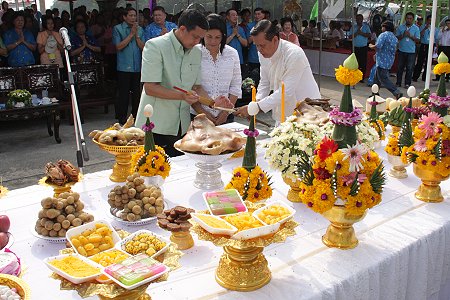 Waiting for us on the other side, in front of Phra Samut Chedi, was another generous spread of food and drinks for the Gods. A similar ceremony took place here. At the end, the best dishes were offered to the Governor and then local people were allowed to take the remainder of the food. 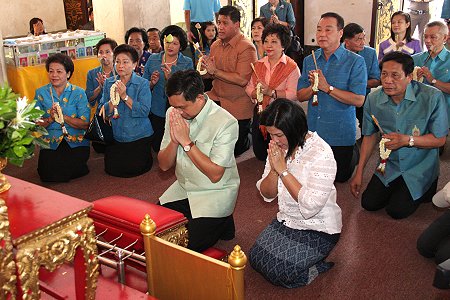 Mr. Surachai Khanasa and his wife then went inside the chapel to pay homage to the Buddha image. The principal image is a standing Buddha with his arms outstretched as if he is holding back the waves. 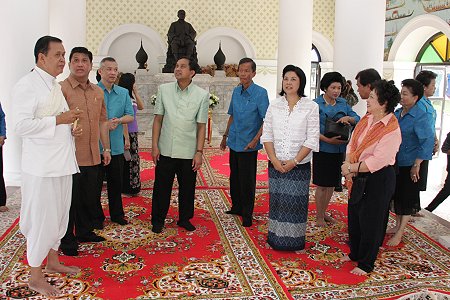 Next, the Governor went to the European style building to pay homage to the statue of King Rama II. The building of this temple was the idea of this King though he died before work could be started. It was finished by his son. The temple was originally on an island in the Chao Phraya River. 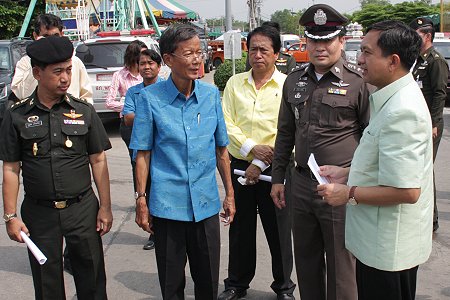 The Governor finished by inspecting the area around the temple where everyone will come tomorrow for the ceremony to wrap the red cloth around the Chedi. The parade starts at Paknam with a ceremony at 7 a.m. The cloth will then go to Phra Pradaeng by boat for another parade before going to Phra Samut Chedi for the final sacred ceremony. Guest of honour this year is Chavarat Charnvirakul, the Interior Minister. He was briefly Prime Minister of Thailand last year. I will be posting a report of the parade and ceremony here at www.thai-blogs.com and www.paknam.com tomorrow.

We are posting information and maps about the Temple Fair at the Samut Prakan Forums. We are posting pictures and videos there every day for the next eleven days.