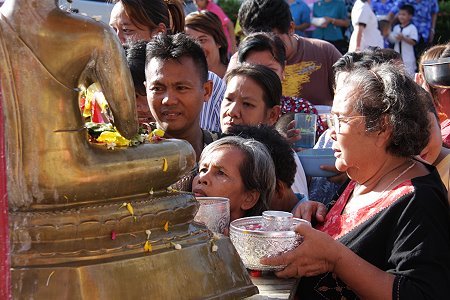 One of the more traditional events that took place during Songkran recently was “song nam phra“. This is the practice of bathing Buddha images with rose scented water. Most tourists, and even some Thai teenagers, seem to think that Songkran is only about throwing water at each other. However, it was originally more a bathing of Buddha images and pouring water on the hands of monks and elders. The latter ceremony is called “rod nam dam hua“. Over the years people tend to spend more time playing water fights which is obviously more fun. 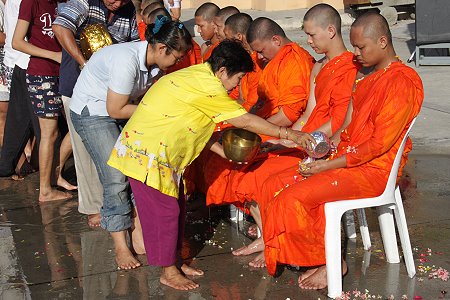 I took these pictures at Wat Mahawong in Samut Prakan last week during their annual “song nam phra” ceremony. People came to the temple in their best clothes with their families. Much like they did for the “phra chedi sai” ceremony which I told you about before. They then prepared some rose scented water which they first poured onto a Buddha image. Next they walked down a line of seated monks and carefully poured some water onto their hands. Some people, who were a bit more familiar with the younger monks, poured some colder water down their necks. 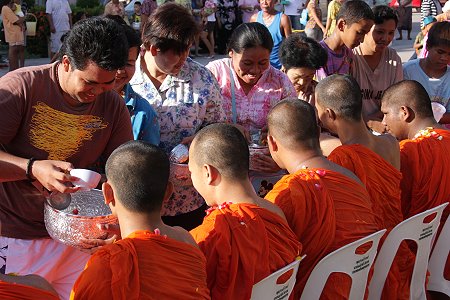 I am sure the monks didn’t mind this public bathing. Their chairs were all lined up in the sun and it was extremely hot. In the shade it reached a scorching 39 degrees Celsius that day. Once the lay people had finished pouring water on the monks, they then had some fun splashing water on each other. This is basically where the water fights started. In the old days, it was mainly restricted to the temples. Now it is on all the streets and no-one is safe from the roaming pick-up trucks armed to the teeth with barrels of water and powerful water guns. 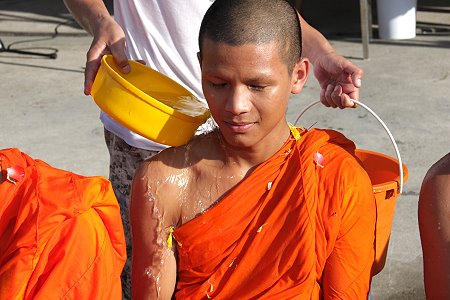 I am glad that Songkran is finally over. For us in Samut Prakan it lasted seven days. After the final day I decided that it was finally safe to go and get my car washed. During the week there was no point as it was often smeared with white paste. I can now also walk down the street without having to keep looking over my shoulder. Not that I am walking around outside much at the moment. It is so hot here in Thailand. At least with Songkran there is plenty of water being thrown around if you don’t mind getting wet. I have written quite a few stories about Songkran in Samut Prakan. You can find them all in the Festivals in Samut Prakan section of our local website www.Paknam.com.