The 30th Bangkok International Motor Show is taking place at the moment at BITEC. This exhibition hall is not far up the road from me in Bang Na District. Whenever the motor show takes place here the traffic jams outside are really horrendous. It is best to avoid this area if you don’t want to go and see the cars. I guess things will change when the nearby BTS Sky Train Station will open in the second half of 2010. I arrived this morning at 11 a.m. just as the doors for the show were opening for the public. The car park was already full and I had to double park. The Motor Show is open for 14 days and runs until this Monday which is a public holiday. If you are planning on going then I think it is best to go early or use public transport. The visitor account is expected to reach 1.5 million people. They have already sold over 8,000 cars during the first seven days and expect the final total to be 17,000 vehicles. Due to the 180% import taxes and 25% VAT tax, it is not cheap to buy cars in Thailand. In fact they are far more expensive in Thailand than similar cars in America and Western Europe. Even second hand cars here are very expensive. Most cars being sold at the Motor Show are in the range of 700,000 – 3 million baht. If you had the choice, would you buy a second car for your family or a holiday home by the beach? They are the same price. 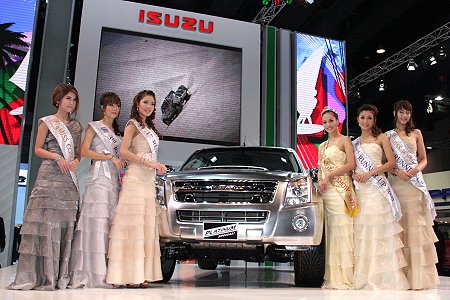 Just in case you were wondering whether I was only taking pictures of the models at the show. The last picture here actually features a car as well. The motor Show is open from 11 a.m. to 10 p.m. It is not free to go in though there are plenty of free tickets going around. I think it costs about 100 baht if you don’t have a ticket. The last day of the show is Monday 6th April 2009. Expect large crowds.