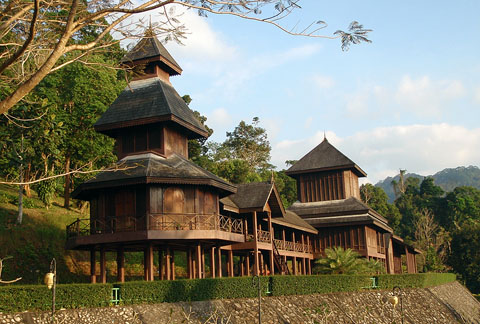 Falling victim to Thailand’s latest anti-tourist law, I found myself in the completely absurd position of having to make two visa runs in four days. Planning to spend my final month in SE Asia in Thailand, I arrived at Chiang Khong 34 days before my flight was due. I could have stayed in Lao another 4 days but as I was going to Songkhla I didn’t mind having to hop over the Malay border one day. However, as happened to so many other people arriving in the LOX (Land of Xenophobia), when I got my immigration stamp in Chiang Khong, the border official informed me he was stamping me in for 15 days instead of a month. Well geez thanks Thailand I thought, thanks for the advance warning and all the publicising of this new (two week old) law. I could have gone to another country instead if I’d known in advance.

When I hit the south things didn’t get much better, Songkhla was underwater and unreachable so I did a quick visa run from rain drenched Had Yai and decided to head north to sunnier climes. I really didn’t want to go to Burma again, I’d been travelling there only a few weeks before, however Ranong was the only place in the vicinity and not charging extortionate visa fees.

As I arrived in Ranong the sun came out on my ailing trip, both literally and metaphorically. I’d never been to Ranong before and it turned out to be somewhat of a gem. Ranong is the most sparsely populated province in Thailand and not the easiest to get to with only one road from Chumphon. Buses from the south have to go to Chumphon 100k north of it and then double back. Muang Ranong is a small town of about 25,000 people and has a laid back ambiance. Lonely Planet recommends a backpackers guesthouse beside the bus station in front of the grim highway and well outside of town which is set up for visa runs and seems to steer away most of the tourist traffic from going into town.

Inside the town there is a very small tourist scene around the night market of no more than 30-40 tourists. There are no guesthouses but three Chinese hotels. I stayed at the Asia Hotel the least touristy of the three where I got a large clean room with hot water for B160 a night.

The town sees so few tourists the prices seem a throwback to Thailand over a decade ago and the locals really friendly. The town is also one of the easiest to get around I’ve ever found in Thailand. Beside the market around 15 routes of songthaew leave every few minutes for every part of the town and around. A few songthaews have the places of interest written in English, such as hot springs, cave and border, all cost less than ten baht.

An alternative way of getting around is walking; I saw no bicycle hire shops. The town is not large but very picturesque, with some great old fashion markets off the main roads and plenty of Burmese food stalls. It is also quite hilly offering some great views and some nice woods to walk in.

Just down the road from the market there is quite a lot of nightlife. A surprisingly large amount of upmarket bars and restaurants filled with locals raving and drinking (surprisingly cheap) cocktails. This area of town also becomes a large Walking Street in the evening as the locals come out to buy and sell their wares. 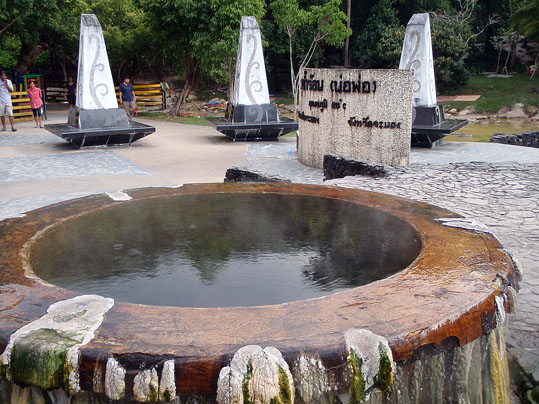 The two tourist attractions I visited while there (both free) were the hot springs and Rattana Rangsarn Throne Hall, both of which I walked to. The throne hall is on the edge town 10 min walk from the market. It has pretty garden and a great hilltop view of the town. The hot springs are a little outside of town but well sign posted and seem to be very popular amongst the Thais. A small picturesque river had dozens of picnickers on the banks, scenic bridges crossed the river. There was a rather strange concrete sleeping area over the springs with a sign saying maximum sleep time 30 mins and several posh health spas along the road. The springs themselves had a bathing area (sign saying feet only) with a couple of dozen people enjoying a foot soaking and half a dozen more soaking their whole bodies.

Having come only for a Visa run and instead having spent 3 rather pleasurable days in Ranong it was time to hop over to Burma. I had thought I would at least stay the night, however hearing there were only 3 hotels a foreigner could legally stay and the cheapest was 600 baht (B150 for Burmese) I decided to give it a miss. I took the songthaew from the market straight to immigration, about 20 mins from town where I was instantly set upon by touts trying to lead me to a boat.

As I walked to the border control, the touts tried to sell me a two way trip for B800 dropping to B550 as I ignored them. With so few tourists in town I had expected a sleepy border post, instead it was Chatuchak at midday, with hundreds of tourists arriving each hour. Having not seen them in town I got talking to some wondering where they came from. Most were being mini-vanned from islands such as Samui and Phang Ngan, some journey, them having left 4am and it being 8:30 as they queued with me.

After I had stamped out of Thailand I walked to the end of the Jetty where the boats are, and asked the oldest and most raggedy boatman I could find in Thai language how much for a return trip, he quoted B200 and I quickly jumped in his boat. Just before we left I overheard the local boat mafia boss give him a bit of berating for charging too little. A few years back the fares had been B100 however a bit of research had revealed if you can get B250 now you done good, most pay a lot more though as most of the island visa run people I chatted to hadn’t even negotiated a price before getting into a boat and were wondering what the bill would be at the end of the trip. 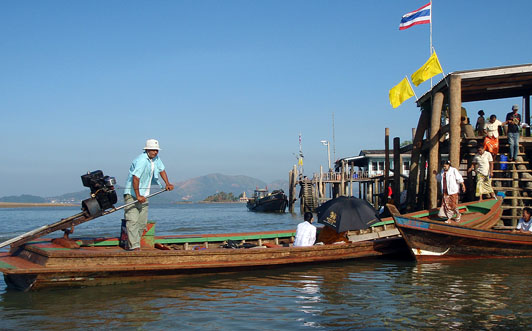 The visa run itself took three hours. First you sail past Thai immigration on a small island with a huge golden Buddha, then you cross to Myanmar, it was quite a pleasant boat ride but even on a calm day the cross tides were strong and the boat rocked, I wouldn’t fancy it in bad weather. Arriving in Myanmar you visit another island with Myanmar Immigration on it. There you surrender your passports for inspection plus one photocopy and pay B20 for the service.

Next it’s to the mainland where you dock and go to a small immigration office. You can pay either $10(B350) or B500 however Burmese immigration will only take pristine notes. 5 people’s dollars were rejected while I was there, one absolutely new but with a tiny ink mark on one edge no more than a couple of millimetres in size. While there the first words you here as you arrive in Myanmar will be “Viag#ra” as people cluster around you trying to sell you these dodgy Burmese chemicals. In fact while there 50% of all the words you will hear are “Viag#ra, sexy movie and Burmese whiskey.”

On the return trip you will once again visit Burmese and Thai immigration, this time Thai officials will board the boat and checks people’s bags for large quantities of Burmese whiskey. The round trip took three hours and B570 including songtaws, it should have been quicker but for the a Greek guy who refused to move until he got his photocopy back before leaving Myanmar, not wishing to leave them with private information about him and failing to comprehend the significance of them having already typed his details into computer and an Australian hippy who arrived without any money at all.

I’m very glad I went to Ranong, it’s a beautiful town and a kind of throwback to Thailand of old that I would recommend it to anyone. Though I always hesitate to recommend places like this because if tourists did start arriving in numbers, prices will increase, honesty decrease and worst of all prices will be slapped on the town’s entirely free and beautiful sights. Thai governments in their greed for tourist geld seem to like to charge Thais for living in their own hometown, as the waterfall where mother and father met and everyone in the town visited as a kid is fenced off and an admission fee charged, reducing locals to second class citizens in their own country.

Myanmar however I wouldn’t recommend. An overpriced and rather dull border town, so unrepresentative of the rest of the country. For a visa run it is still a cheap option but with the new 15 day law creating an inundation of new visa-runners it’s going to be very difficult to get a boat trip without getting scalped.

12 responses to “Visiting Ranong and Doing a Visa Run”