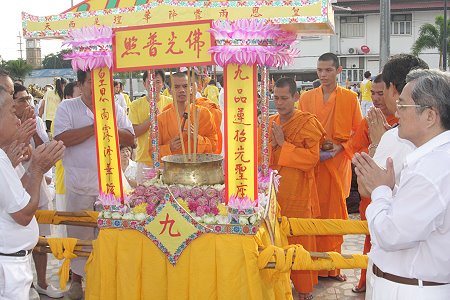 After nine days and nights of eating a vegan diet and keeping the 10 precepts, the Vegetarian Festival in Thailand is finally over. For the first time this year, I became more involved, by not only taking pictures of the various events around town and at the local shrines, but also by eating a strict vegan diet until the very last day. It turned out to be a lot easier than I thought once I had worked out what I could and couldn’t eat. In Paknam, there were many roadside stalls selling a large variety of vegetarian food. In the evening I was truly spoiled for choice. I am not sure how the detoxing went and whether it was actually good for my body in the end. Most people were worried about doing this vegan diet as many of the dishes are fried and they didn’t want to put on weight. I didn’t particularly pay any attention to their worries, though I was careful to have as much of a balanced diet as I could. And strangely, I actually lost four kilos despite the fact that I wasn’t trying and was full for most of the time. Maybe I should do it again next year. 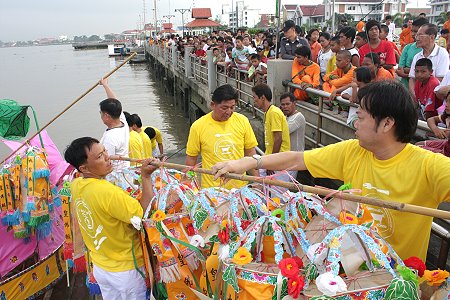 The end of the Vegetarian Festival in Samut Prakan was celebrated early on the tenth morning with a large parade through the town. In fact it was very early as it was scheduled to start at 6 a.m. from Rongjae near Taiban Circle. It was still a little dark when I left home and drove over to Taiban. There was a bit of activity going on with some people preparing banners for the parade but not a lot. I decided that as Paknam has a one way road system, It would be better if I drove ahead to the city hall and wait there for the parade to approach. I guess they left late as I didn’t hear them approaching until close on 7 a.m. At the city hall they quickly prepared a shrine for some chanting while a gigantic “krathong” was hoisted over the river wall and down onto a makeshift raft. People then threw onto this paper lanterns and lotus flowers. 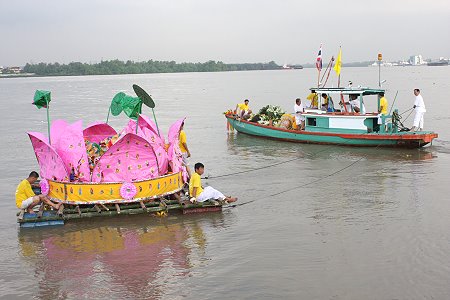 While a dragon danced up an down amid the sound of firecrackers, the floating krathong was towed out into the middle of the river where it was set on fire. This ceremony, called “Loy Krathong Jae” was performed as a way to make merit for ancestors and the dead souls in the water. A few minutes later everything was being packed up and people started to prepare for the parade back to the shrine at Taiban circle. What I didn’t realize until later, was that this was in fact the start of the main parade which would circle the town and finally come back to city hall. This time there were several marching bands and hundreds of people. There were also many more people lining the streets watching the parade. 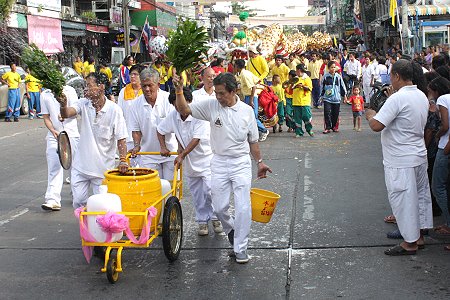 At first I stood in front of the Police Station to take pictures but then decided to follow them along the street for a while. I am so glad that I went as far as the city pillar where there is a Chinese shrine, as there were quite a few activities organized there. Here are some of my pictures. 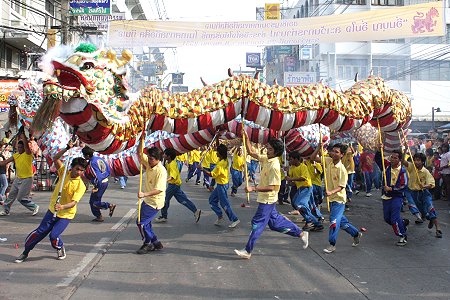 There were about three or four of the large Chinese dragons in the parade. As you can see from this picture, the guys holding up the dragon must be very athletic as they have to dance back and forth along the two kilometre long route. 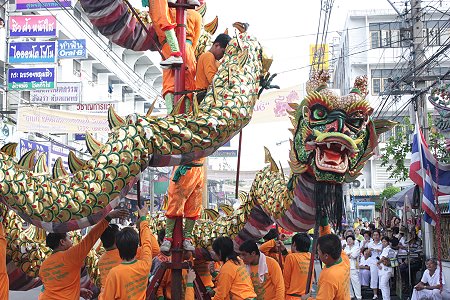 Outside the Chinese Shrine at City Pillar, two tall poles were set up for a kind of performance. I presume this was as much for the Gods and spirits residing in the shrine as it was for the hundreds of people watching. 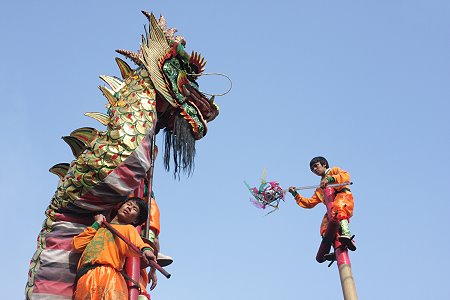 I have never seen this performance before and it was quite amazing to see how this very large dragon manages to go up the poll. Not only that, it was twisting and turning and reacting to someone on the second pole who was teasing the dragon with a stick. Back on the ground, the dancing dragon dashed into the shrine to pay respects. At the same time, very large firecrackers were going off. 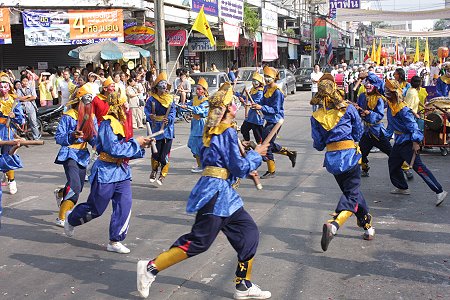 While this performance was going on, the rest of the parade was waiting patiently to proceed. Then, as they passed the shrine they all paid respects. This went on for seemingly a long time. The last group passed the shrine at 8.45 a.m. I then walked back to the city hall where I had parked my car. By this time, the front of the parade was already arriving to complete their circuit of the town. It was all over by about 9.15 a.m. I have been to a number of different parades but this one was certainly the liveliest. Though, next time maybe I should bring some ear plugs. And I certainly would like to shoot some video next time as there was so much going on to entertain all of your senses. Pictures alone cannot clearly paint a picture of this parade. 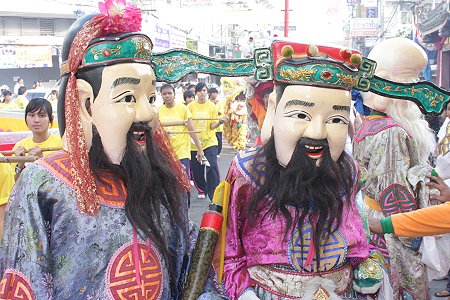 The next parade through Samut Prakan will probably be the one to mark the start of the Phra Samut Chedi Temple Fair on 19th October 2008. Please visit the www.ThailandQA.com Forums as we always post news of upcoming festivals and dates over there. We have just posted the dates for events and festivals in 2009 if you are planning a holiday to Thailand.

One response to “Vegetarian Festival Parade”