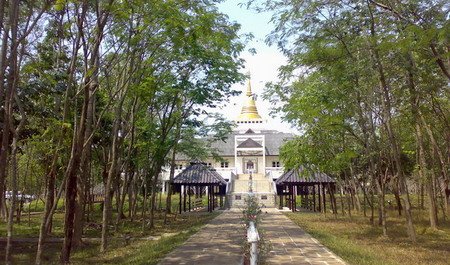 A few weeks back, I decided that it was finally time to get away from this escapist world and return to ‘myself’ via a silent 10-Day meditation course (the usual amount of time for a decent course). It was to be my first in 3 years but one of many which I have struggled through during all my time in Thailand. While chatting with a good buddy of mine in Bangkok, he advised the same one which he had attended a couple of years ago in Prachinburi Province not too far from the capital. After deciding that was the place for me, I thought it wise to tell minimal folk of my ‘spiritual’ intention as I just didn’t wanted to be bombarded with the usual questions along the lines of ‘Why the heck are you going on a meditation retreat?!’ So, if you are one of those I told a ‘white lie’ too about my location a week or so, then my apologies, but here follows is the truth!

The course I chose was none other than a S.N Goenka 10-Day Meditation Course. In case you haven’t the foggiest to who S.N Goenka is, then let me advise you that he is one of the most internationally renowned Vipassana meditation masters and teachers in modern times. Goenka, a Burmese-Indian in origin, is also famed for running one of the strictest meditation courses the world over. And I was to find out just how tough it was!

Out of the 4 Goenka meditation centers located in Thailand, the one I secured a place on was at Dhamma Kamala in Prachinburi, the original Goenka retreat in the country. So, on the first day, the 30th July, I made my way to the well-known Wat Phra Sri Mahathat in Bangkok and took one of the center’s passenger vans to the place which was to be my silent dwelling for the next week and a half. Arriving at the center 2 hours later, I was well-chuffed to see that my room had a nice semi-comfortable bed instead of a mat on a stone floor which is the norm at meditation retreats at temples. I was also thrilled at the prospect of jam sandwiches for tea time; at temples, again, meditators/monks get nothing in the evening besides the likes of a carton of milk. But, as is usual at most such retreats in Thailand the twice daily meals were to be nothing but pure vegan. Around about 30% of the meditators in attendance were ‘old students’ (ie…. meditators who had done the Geonka course at least once before) and the rest ‘new students’ (ie…. The likes of me who didn’t have a glue what the heck he was getting himself in for)

So, in the early evening of Day 0, I thought that this meditation would be a walk-over ‘piece of cake’ absolutely no problem to survive. I am certain that the other 20 or so foreigners (and about 80 Thais) thought more or less the same. That was of course till Day 1.

After a pathetic first nights sleep (my mind must have been wondering where the heck I was) I was awoken at 4am by the bell. We all made our way to the main hall for 4:30 meditation session. On that first day alone, we were literally forced to sit out an unprecedented 8 hours worth of meditation. And that was sitting meditation! Absolutely no walking meditation whatsoever. I use the word ‘forced’ cause anyone who couldn’t last was kindly asked to leave and go home. This I thought must be the world’s only self-desired prison! The teacher in charge was sat on a podium at the front of the room and did little else but turn on Goenka recordings on how to meditate etc….. She was a decidedly elderly woman and I found out later that she held the honourable title of ThanYing, the highest possible title for a commoner, and to acquire such a title like that you gotta be well-liked by the person who bestows it, the one and only Queen of Thailand. Well, she was well respected by former students who were attending the course (they made up about a third of the meditators) and they always bowed to her three times. An action I had never seen use for a woman before; it is normally used only for high-ranking monks; not even the higher echelons of royalty get such a welcome.

That first day, I am positively sure that every one of us foreigners there were truly suffering, I mean our legs must have been killing all of us. My legs were, and I am even used to sitting on the floor in a half-lotus position at home. The second day was the real test and we were again literally forced to sit in meditation for up to 9 hours! As you can imagine, that kinda workload is just a bit too much for some folk, and by midday of the following day, I guessed that 20% of the meditators had done a runner and fled! And I am not joking! We were soon to learn, however, that this kind of absolute tolerance and determination was all part of Goenka’s technique ie… if you can’t survive the first couple of days then the teachings aren’t gonna do ya much good. As has always been said though, the first 2-3 days of a meditation course are always the hardest.

This kind of retreat doesn’t only expect noble silence (no communication whatsoever ie.. eye-contact etc..) but also absolutely no mobile phone messages, reading or writing, it is pure Vipassana meditation. The only person you are allowed to talk to on Goenka’s courses is the supervisor in charge and only if you have a health problem or forgot your toothpaste etc.. Men and women are also totally segregated. Every evening us foreigners were separated from the Thais in that we had to had to watch Goenka’s discourse for the day and perhaps instructions on the meditation for the following day. We all found Goenka’s video discourses to be great; unlike any other Buddhist/meditation teacher I had heard before, he was petty hilarious and got his messages across in such an easily understandable matter. His daily video was one of the highlights of the day, second only – of course – to meal times.

After an awesome first two days, the vigorous schedule was finally eased on Day 3 and the morning class (4:30-6:30am) was no longer compulsory. Half of us foreign guys did however, still turn up every day – but as for the every single one of the ‘new student’ Thai guys though, they spent the next 7 days getting a lie in. That is because, most of the Thai blokes were real young and were not on the course due their own wise decision, they had been sent there by their parents! This was verified later by one of the Thai guys and the male supervisor. Altogether, the women way out-numbered the men, about 4 to 1 and, in general, they adhered to the schedule much more obediently than us men. That said however, a higher percentage of women did drop out of the course before it ended. If you want an idea on how tough this course really is, I counted a total of around almost 30% of the ‘new student’ females who did not last the ten days.

From the second day on, here is a rough idea of the schedule at Goenka meditation retreats:

As you can see from the above, you are expected to complete a minimum of 7 hours sat-on-yer-bum meditation a day.
Now, after 4 days of this, my legs were totally falling apart and I my recurring groin injury suddenly surfaced again to add even more to the pain. It was at around this time when I seriously wondered whether I would be able to survive the 10 days.

On the evening of the 4th with my groin injury really kicking in (first time in months I had felt it) Goenka informed us that from now on we were expected, for 4 separate hours day, to sit completely still for the entire hour! That is, to not move whatsoever, not even our hands – this is where I thought this course was ‘madness’! Just at that time, however, Goenka taught us a meditation technique based on sensations which miraculously eased the suffering in our joints (I had however, learnt a similar technique on my last meditation retreat 3 years back – but we weren’t allowed to mix any other meditation technique with Goenka’s)

As is usual, again, on meditation retreats, days 5,6 and 7 flowed along all right; and I was beginning to feel at least a little at home. It was around this time though, that I became to get a bit pished-off with the amount noise in our residence. Our rooms were in a wooded landing where you can literally hear everything that goes on in the room next-door. So, if someone slightly slams the door, then that noise reverberates throughout the corridor. This led to my only complaint about the course, as at some times in the day you were expected to do meditation in your room if you didn’t go to the main hall (see above schedule under ‘not compulsory’). What a joke! At least one of the young whipper-snapper young Thais spent all their time in their rooms, instead of supposedly meditating, banging away, slamming their doors and running in and out every 5 minutes. I brought it up with the supervisor and it was then that he admitted that a lot of these guys were only on the course because of their mums.

Getting into the 8th day, and instead of going to sleep at night thinking ‘Buddha Buddha’ it had suddenly changed to ‘Burger Burger’ – I was seriously beginning to count down the hours before my return to civilization! And so, even though the last couple of days went by with me more or less tired of the regime, I was feeling fresh in the head and my meditation was going well. Every thing very much changed on Day 10 when Noble Silence was ended and everyone was allowed to speak again. This offered a pleasing opportunity to get to know the other meditators you had been physically close to but hadn’t even looked in the eye for the past 10 days. As you can imagine however, it did feel a bit freaky finally speaking after that extensive amount of time in silence. After breakfast on Day 11, we boarded the bus and to our relief, were on the way home.

Altogether, the experience was a truly uplifting one and I have been on a high ever since. I would certainly recommended the course but I wouldn’t be too certain of advising the place to someone who had never done any kind of proper meditation before. And for sure, I would only suggest the course to those who feel absolute certain that they are up to it!

As for the technique you learn, I deliberately left the contents out in this blog. That’s to say, if you wanna find out what it’s all about, then it is much better to find out all by yourself!