The Rains Retreat in Thailand 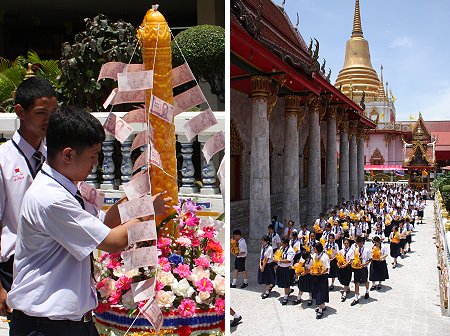 It has come to that time of year when we take part in processions around the temple and make offerings to the monks. The full moon in July marks the start of the three month long Rains Retreat. Thursday 17th July 2008 is Asarnha Bucha and the following day is Khao Phansa which marks the official start. These are public holidays and many people will go to the temple early in the morning to make merit. Then they will be back in the evening to take part in candlelight processions around the main stupa. They will also listen to sermons and many of them will make an effort to keep the Buddhist precepts. If you are on holiday in Thailand at the moment, you should be aware that this holiday is alcohol free.

This past week, many schools in Thailand visited one of their local temples to make merit. Our school went as well. We took along a two metre high candle which will be kept alight for the entire Rains Retreat. We also took buckets of food and basic essentials for the monks. And of course lots of money. The temples do very well at this time of year. On arriving at the temple, the school band led a procession around the ordination hall. We did this in a clockwise direction three times. We then went inside the sala to make an offering to the monks, take part in some chanting and then listened to a sermon from the abbot.

The tradition of the Rains retreat dates back to the time of the Lord Buddha. He made it a rule that during the rainy season monks shouldn’t go wandering around the countryside as they could damage crops and insects underfoot. So, for the next three months, the monks have to choose a temple where they will stay. This week has seen a number of Thai adults ordaining as monks. This is traditional for Thai males to become a monk at least once in their life. In fact, they are not considered a full man until they do so. If they work in a government office, then they are entitled to paid leave while they are in the monkhood. These days they usually only become a monk for a couple of weeks. However, if they become a monk during this time, they have to stay until the end of the Rains Retreat as no-one is allowed to leave during this period.

About 95% of the people in Thailand are Buddhists. However, a recent poll of Bangkok residents revealed that only 25% would make merit at the temple on Asarnha Bucha Day. Then only 19% said they would take part in the candlelight procession. That is sad to hear as Buddhism is more than a religion. It is a way of life here in Thailand. If people start abandoning Buddhism, what does this say about the state of the nation? How much of it can we blame on the economic situation?

4 responses to “The Rains Retreat in Thailand”