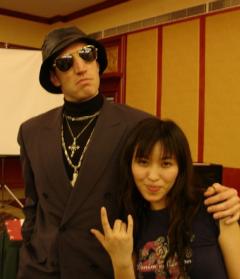 Well, there was certainly a slight delay there with this new blog of mine as it was that time of the year again to run around like an intoxicated beaver to renew my visa etc.. For those of you readers who have had to do this yourself, you will know just how painstakingly boring the procedure just is.

So, im back as soon as possible after a dear Farang friend of mine from the Nation newspaper in his last e-mail quoted: “You will have to start blogging more frequently and catch up with that Mr Richard fellow who posts at the rate of 27 blogs a day”.

For a lot of you students out there just wondering to the ‘ins and outs’ of that spotty white-faced teacher of yours I thought I would enlighten you today and give you all, in part one, a behind the scenes look at that not so endangered species: the hungover Farang teacher.

Having spent a heck of a long time teaching here in the Land of Smiles you could well imagine how many frivolous Farang teachers ive had the pleasure of knowing. Here is the story of just a few of them.

A long while back I had a ‘journo’ friend of mine, Tim, who on realising he wasn’t exactly going to strike it rich writing, decides one day to put on a shirt and tie and go look for a teaching job out there in the concrete jungle of Bangkok. Unfortunately for him he wasn’t the most popular of teachers and hastily got himself sacked from four jobs within the spate of four weeks. On one occasion it was cause he had all the kids stand on their heads for half an hour as punishment (of course half the class went on to vomit their breakfasts up!) and then another time after he locked the kids out of the school’s back door, unluckily for the kids a rain storm soon arrived.

He had also scooped an evening job at a private snobby school on Silom which was far more to Tim’s liking as most of the classes were adults. Sadly for him he wasn’t too popular there neither with the grown-ups and was nicknamed ‘smelly sock’ before getting the boot cause of the air-pollution he was causing! Feeling deflated Tim soon struck it lucky when a couple of pretty uni. students asked to study with him at his gaff on Samsen. The class went well but his girlfriend was berated that she had been relegated to stay put in the bedroom for the whole two hours. A punch-up soon followed after his girlfriend claimed that he had spent the two hours admiring his students’ legs and flirting with them. To this day Tim is still here in Thailand, writing.

Talking about keeping a job, or the lack of being able too, I know this Farang over there in Thonburi that once boasted to me that he had taught at over a hundred schools in his ten years in Bangkok. Nothing too much to brag about when he’s been sacked from every one. On our last meeting I heard him groan on “I just don’t know where to apply now”. On top of that, he informed me last year that since he spends all his earnings on beer and girls, his visa is well over due so being of a rather paranoid nature, locks himself up in his room in his spare time hoping Bangkok’s finest aren’t going to single him out and bang him up before deportation

I remember at my old school a couple of funny teachers we had come in there. The first, a Scotiish guy who on getting the job decides to get sick five days in the first three weeks. Furthermore he wasn’t too popular with the kids as he would call them ‘buffalo’ for not understanding his commands such as “You stand up”. When I asked one of his kids “Well, why don’t you just stand-up then ?” replies “We don’t know who he is talking too”, of course the poor fellow was actually cross-eyed!

Then at another school of mine we had this Australian come to teach, but she only lasted a week. Why? Cause she refused to take out this stupid looking ring of hers prodded out of her eyebrow. Being her boss, I was the one left to explain to her that such jewelry just wasn’t acceptable at a government school, only to get a right ear-bashing of “Bla bla bla women’s rights bla bla bla” and walked out never to be seen again. Then after her, in comes this funny looking big bald-headed Dutch guy, who is a friend of mine to this day. His idea of a lesson plan to wake the kids up was for them to sing along while he played the electric guitar. “Well that’s a bit different I thought” but after a couple of weeks of this the kids did get fractionally bored. His other two passions in life were cooking and Buddhism. Now this guy could talk, I mean he could go on and on and on. For a whole darned hour he could stand there and just waffle on about the best way to make sweet green curry while half the class fell asleep while the other half read cartoon books. As you could imagine he wasn’t invited back for the next school year.

Quite a few years ago after a longish stint up there in the north-east and a nice lengthy holiday to go with it, I had arrived in Bangkok at a hazardous time of the year for finding a decent teaching job. Before long however, after plodding around looking for the odd bit of work here and there I soon picked up a couple of hours at a branch of ABC schools.

One evening, shortly after just starting, I was informed ten minutes before one of the classes by the receptionist “Mr Plonch from HQ is here today and he wants to observe your class”. Oh no… as my students were a bunch of randy guys from a company nearby, my lesson plan for the day was something like ‘dos and don’ts of chatting up a Farang girl’. Knowing this wouldn’t be taken too well by Mr Plonch I decided instead on the spur of the moment to have all the students ask Mr Plonch 3 questions each using the language I had taught them.

So in comes this sturdy serious looking English guy who sits down at the back of the class as if no-one had noticed. Perplexed as the students were, to which bus he had just fallen off, I explained to them in Thai who he was. After a few of the students asked Mr Plonch questions such as: Do you like Thai girls?” “No, then you must like Thai men then?”, “Why you come to Thailand?” and “When you go home your country?” it was obvious that Mr Plonch was getting rather irritable. As for me and the students, we were having a right laugh as usual.

A few days later I was handed by the secretary a ‘letter of observation’ from Mr Plonch himself. It went something like this.

Dear Mr Stephen,
I’m writing in regards to that class of yours of which I observed a few days ago. Firstly, when I go to observe a lesson, I go to observe it and observe it I do and NOT assist in the teaching. Even though your students enjoy your classes that is not the policy objective of ABC schools, but learning is. Having me sat in your class and to be made a mockery of is not to my liking. Furthermore any distasteful jokes about my neck-tie and hair-style are completely uncalled for.
Finally, NEVER speak Thai in class, the students have paid their money to learn English NOT for you to practice your Thai. When I next come to observe you I want to see a vast improvement in your teaching techniques.

As you could have imagined, ABCs aren’t as popular as they used to be and now half of their upcountry branches are now defunct.

Fortunately for Mr Plonch he never did have to observe another class of mine after I landed a ‘proper’ teaching job a couple of weeks later. Ever since then it has been me myself that has to do observations and hire the applicants.

Talking about just some of the foreigners ive met hoping for a job, well… I could go on and on about a few of the bad-breathed quackwacks ive had the not so enviable task of interviewing. My main criticism is that so many of them come along to the interview with a stick-insect so-called girlfriend of theirs who is obviously some Nana Plaza a-go-go dancer! There she is stood outside with a frightening short skirt half way up her bottom, covered in tattoos and smoking away. I’ve honestly had to tell a couple of guys “The job, should you get it, is at a government high school, so sorry, whatever you do, DON’T have that girlfriend of yours pick you up at the school gates after work!

Another thing I really hate to say about govt schools and most other schools is the fact that they are not in the habit of hiring our friends from Africa just cause of their skin colour. Ive had the unfortunate task of having to turn a few of them down, who were real nice guys and had to make up excuses over the phone of why they weren’t recruited. Just a few days back on responding to my ad at a teacher’s website I had one guy from West Africa repeatedly call me about the position available and didn’t well believe me on how the position had so suddenly been taken.

Finally, the guy gave up but not before brawling down the phone “It’s cause im from Africa, isnt it?, you don’t want me just cause its my skin colour right?, shame on you man” and hung up. I felt rather saddened for him and a little hurt myself but what else could I do when the Director had instructed me to the likes of “No Africa man, he would scare the living daylights out of the grade one children!” So, I just didn’t want to have the poor fellow travelling all the way from Sukhumvit to Suphan for nothing.

Finally, going back to Farang. The couple of English guys we had teaching here last year did such a fine job that we decided that for the next school year we would hire a couple of Filipino girls instead.

Painstakingly (adv) = extremely
Fellow (n) = man
Ins and outs = behind the scenes facts, usually best not to be known
Journo (n)= ‘journalist’, ones of the likes in Bangkok who think us teachers are a right bunch of losers.
Gaff (n) = room, flat or condo etc.. usually found in a right mess
Flirt (v) = to put on a show in front of someone of the opposite sex, hoping therefore that he/she will be attracted to you (usually has the opposite effect to the one wanted when performed my the male)
Paranoid (adj) = very afraid
Sack (v) = dismiss from the job
Glutton (n) = someone who eats far too much
Binge out (v) = eat (with a resemblance to a half-starved dog)
Doze off (v) = unintentionally falling asleep for a while
Waffle on (v) = to talk and talk and talk, to the complete boredom of the listener
Plod around (v) = walk around, with no real direction in sight

This entry was posted in Teaching in Thailand. Bookmark the permalink.

16 responses to “Thailand’s Teachers…Part One”