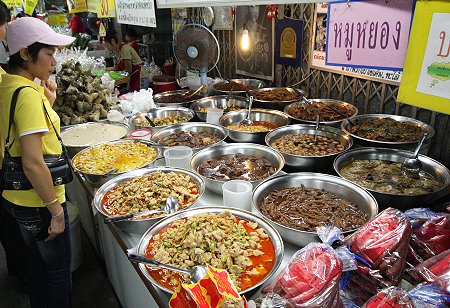 I am really happy that the Kanchanapisek Outer Ringroad has been finished. It now allows us to easily explore tourist attractions around the perimeter of Bangkok quickly and easily. So, last weekend I set off on a day trip to Nakhon Pathom, to the West of Bangkok. My destination was Don Wai Market. Some people call this a floating market. However, strictly speaking, it is a market on the banks of the Nakhon Chaisi River. If you come looking for a Damnoern Saduak Floating Market or even a Amphawa Floating Market then you will be disappointed. You won’t see many vendors selling their products on little boats. But, they all have their own attributes which makes them special. I personally enjoyed Don Wai Market and will certainly be going again. 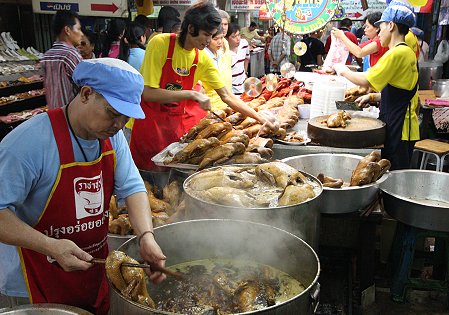 Don Wai Market has been around for over a hundred years. However, it is only recently that it has started to become popular with daytrippers from Bangkok. From my own home, it only took 45 minutes which makes it almost a local source of good food. And I think that is why so many people go there at the weekend. The market was originally famous for the boiled ducks, but now there is a much greater variety of food. Not just curries and snacks, but also Thai sweets. Judging by all the pictures on display, a lot of celebrities and politicians also come to this market. 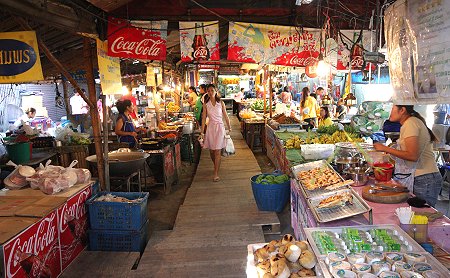 It is best to go to this market as early as you can in order to beat not only the heat but the crowds as well. It opens at 6 a.m. I arrived at 9 a.m. as I dropped in at Wat Rai Khing first to pay my respects to the highly revered Buddha image. They have a popular fair here in April. The temple is also famous for the fish sanctuary where you can buy bread to feed the fish. It is possible to catch a boat from here to Don Wai Market for only 60 baht. However, as I was early, it looked like they were waiting for enough people to make the journey worthwhile. As you can see from this picture, there weren’t that many people at the market when I first arrived. However, when I left at midday it was so crowded with people it took forever to move through the crowds. By that time I couldn’t wait to escape. 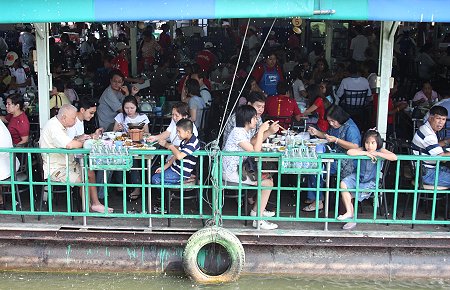 Tourists weren’t going to the market just to buy food. They were going to eat at one of the many floating markets that lined the river. In fact, there are so many of these restaurants that as you walk along the market you don’t get a clear view of the river. However, you do get fine views when you sit down to eat. Just don’t go too late in the morning. Maybe best to come here for a brunch. I was tempted to buy a lot of food to take home. Unfortunately, I had more places to visit on that day and so didn’t think it was a good idea to buy too much fresh food that might go off in a hot car. Tomorrow, I will tell you about my boat trip on the Nakhon Chaisi River.

To get to Don Wai Market is quite easy. I took the Outer Ring (Highway 9) from Samut Prakan. I then turned onto Highway 4 which is signposted Nakhon Pathom. Shortly after the Rose Garden you need to turn right onto Highway 3316. However, as you cannot do a direct turn here, you have to continue as far as the bridge over Nakhon Chaisi River and U-Turn under the bridge. Make sure you keep left for this. You will see a bigger sign for Wat Rai Khing rather than for the market. Keep going until you reach the market on the left. You cannot miss it nor the crowds. Make sure that you arrive early if you want to park a car. This costs 20 baht. There is more than one place to park. Just keep driving along the road.

This entry was posted in Nakhon Pathom, Road Trips and tagged market. Bookmark the permalink.