(The following blog was published yesterday at The Nation newspaper. It is a follow-up to my last blog about Skimpy-looking University Girls. I thank some of the folk who commented on that blog as they gave me the idea to further the story. Here below is the original un-edited submission to The Nation)

Just last week, the nation woke up to the shocking Thai language newspaper headlines along the lines of ‘Sexy Skimpy University-Uniformed girls, smoking cigarettes at Wat Pho!’ The story goes that Khunying Chaisri from the Cultural Ministry on receiving a tip off, headed to this revered temple to witness for herself the horrendous sight of 5 naughty young women wearing saucy looking uniforms with their belly-buttons poking out while supposedly flirting with foreign tourists.

Khunying digsusted at such sickenening behaviour, immediately ordered an investigation to decipher whether the girls, were in fact not university students at all, but instead prostitutes out to procure clientele for a quick fling at a near-by short-time motel. The reports were made even worse when the reporters decided to repeatedly mention that the foreign tourists in the scenario were ‘coloured’, dark’ and ‘black’. After intensive investigation, it was found that the girls were actually ‘real’ students just wanting to practice their English. The damage had been down though, and the girls had to publicly apologize to the Cultural Ministry live on TV.

Even though I do agree that attendees to places of worship ought to dress conservatively, the Cultural Ministry isn’t exactly going to solve the problem of skimpy university outfits by busting students like a troupe of undercover cops. As for the Dean of girls’university, he came out with this classic quote “Our institution enforces strict dress regulations”. Now come on – Just what planet is he living on?

One thing the Cultural Ministry has never been, is an advocate for Women’s Rights and will never be the recipient of any prestigious accolades from Female Liberation groups. This story was not the biggest of the week, but it really does say a lot about the Thai mentality towards women. Shiver-me-timbers, ‘The girls were smoking’. Exactly, Thai society frowns upon this kind of delinquent Un-lady-like Thai behaviour, as for men however, they can chug themselves to death.This sad discrimination, as supported by the Cultural Ministry, dictates that women smoking in public ought to be viewed in the same light as ‘underclass ladies of the night’.

The same applies to the drinking of alcohol, the Cultural Ministry has continually informed us that it is completely ‘Un-Thai’ for young woman to drink alcohol. As for men, they can get blitzed as often as they wish. We are also condition to believe that it is perfectly all right for a young man to ‘sow his oats’ and frequent brothels on a daily basis. As advised by the Cultural Ministry, should any unmarried woman care to engage in such activities prior to marriage, then she is absolutely void of any morality.

Discrimination of women is embedded in Thai society. Pick up the Classifieds section of a newspaper and you can read a variety of job offers for ‘women’ which stipulate ‘Not Over 30’. And it is that age, where Thai society dictates that women are getting past their prime. In rural areas, should any woman still be single at this kind of old-age, her parents will be trying to sell her off to any potential husband, regardless to how cheap the dowry is. Should the 30+ year-old woman be poor, a divorcee with kids and have dark-skin then she is graded as ‘bottom of the barrel’. And, it is that exact kind of discrimination against women and especially rural ones, which forces them to save some dignity by looking for a foreign husband. (The kind of university uniforms which are prevalent in modern-age Bangkok – are the Culture Ministry correct in wanting to ‘crackdown?)

I was very disappointed that the newspaper reports had to repeatedly mention the skin-colour of the innocent tourists. Just how would the Culture Ministry have reacted if the tourists in the picture had in fact been white? Generally however, the Thais are certainly not ‘that’ prejudice of different races (besides the Burmese perhaps), they make have a joke and a giggle at ‘coloured’ foreigners’ expense, but thankfully there is none of that full-blown racism here, as is often prevalent in the West.

It has to be admitted that a lot of foreigners and especially Caucasians are pretty paranoid about being desciminated against. Take the word ‘farang’ – scores of Caucasians just fail to realize that this word is not derogatory. In fact the Thai langauge has an abundance of descriptive words for people of different races, and not just ‘farangs’. Westerners just initially perceive it so, as their own society teaches them that such name-calling of folk of different creed, is rude if not down-right racist

What is prejudice, however, is the colour discrimination which is embedded within Thai culture itself. Before, a toddler even learns how to use such adjectives as ‘tall’ or ‘short’ to describe his friends, he does instead learn how to say ‘Ai Dum’ (Darkie). Again, even though the child doesn’t mean anything vicious, she is entering a society that dictates ‘white = beauty’. And I deliberately use the word ‘she’ as it is that sex, which is conditioned, through society, to believe that unless they are of the fairest complexion they aren’t gonna score a rich, handsome husband. Unless of course; he is a Caucasian. The local cosmetics market is flooded with chemicals to whiten ones skin colour. Caucasians may laugh at the likes of Thais needing a colour make-over, but the locals here are also completely bewildered that Caucasians enjoy baking in the sun totally oblivious to the dangers of sun-cancer.

Colour discrimination is rampant in the entertainment industry. The only dark-skinned folk you will see acting it out on trendy Thai Soap Operas are those playing the parts of under-educated maids or gangsters. This discrimination is also portrayed in Thai movies and I can perfectly recall a very popular Thai movie not so long back ‘Yam Yasothon’ which took colour discrimination to new heights. This movie set in the north-east, also included every stereotype under the sun about Isarn villagers; not just dark-skinned but also ‘buck-teethed’ and ‘big-lipped’. Around the same time as this, Bangkok was splattered with billboards advertising the new album for a singer ‘Sena Hoi’, with a huge black made-over mug-shot of his – the album was entitled ‘Dum Jung’ (So Black!) 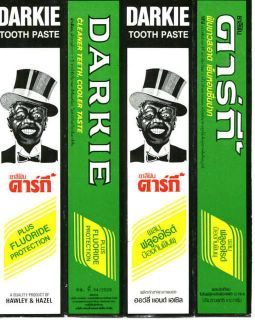 While such discrimination, would be completely unacceptable in the West, a lot of the time the locals here just see it as a simple unharmful fun, and not vindictive. Even folk from the north-east piled into the cinemas and DVD shops to enjoy for themselves the way they are stereotyped in modern-day urban society. What is worrying though, is that those from rural areas haven’t fully realized that they are the victims of a discrimination which affects their daily lives. In the eyes of the average urban educated Thai, the north-easterners are also stereotyped as ‘unattractive’, ‘lazy’ and ‘uneducated’ with ‘alcoholic tendencies, as for the indigenous Southerners they are viewed as ‘thugs’ and ‘jai dum’ (Heartless). In stark comparison however, northern females are seen as ‘beautiful’, simply because of their fair-complexion and soft-spoken regional dialect.

As explained, modern-day Thailand is full of discrimination, but in regards to colour especially, it is nothing in comparison to a lot of the brutal racism which is prevalent in Western society.

Thai society, parents, the education system, the media and the entertainment business has to take much more responsibility in teaching our children that everyone is born equal regardless to sex or colour. And finally, I would certainly advise that Thailand’s Cultural Ministry get the ball rolling and get a grips that this is the 21st century and that the young female generation are not going to tolerate anymore blatant sexual discrimination, which the Ministry – ‘Sunthorn Phu-style’, adheres too. I admit that their heartfelt intentions are caring, but trying to crackdown like they have done is only going to have an opposite effect to the one desired.

19 responses to “Discrimination in Thailand”