One of my favourite temples in Bangkok has to be Wat Benchamabopit. This is more commonly known by tourists and tour guides as the Marble Temple because it was built with marble from Carrera, Italy. It is one of the most stunning examples of modern day temple architecture with a blend of both Thai and Western architectural features. Notice the round columns at the front of the building and also the four tiered roof. Most temples roofs are two or three tiered and the building is oblong in shape. This one is cruciform in shape with a cloister attached to the back. Another departure from Thai tradition are the beautiful stained glass windows.

The Marble Temple is located on the corner of Si Ayutthaya Road and Phra Rama V Road in the Dusit area of the city. It is very close to the King’s residence at Chitralada Palace. This palace was built by King Rama V towards the end of the 19th Century. At that time there were two old temples there that had to be dismantled. In order to make merit, King Rama V decided to build Wat Benchamabopit on the site of a much older temple. Work started in 1900 and continued for ten years. The name means “temple of the fifth king”. Standing guard at the entrance to the ordination hall are two marble lions which are similar in style to the metal ones found at Wat Phra Kaew. Another interesting feature of this temple are the absence of the usual sema stones which mark the boundary of the sacred area. Ordinations of monks can only be carried out in buildings that have these markers in the four corners. However, this temple has two poles at the front side topped with lotus buds. At the rear are two stone slabs marked with the Wheels of Dhamma. 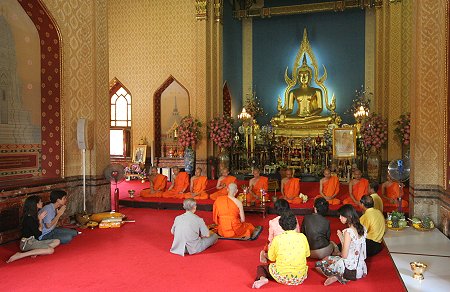 I went to visit the Marble Temple last weekend. On entering I found an ordination taking place. Obviously, as this is a working temple, you should try and be respectful at all times. Make sure you dress properly. Never pose in front of Buddha images or try and have your picture taken with the monks. Although this temple doesn’t see too many individual tourists, it does get quite a few tour buses during the day. The principal Buddha image is in the style of the Buddha subduing Mara. You might recognize this Buddha image as it is a replica of the more famous Phra Buddha Chanarat at Wat Phra Si Ratana Mahathat in Phitsanulok. Actually, the symmetry of this building is also similar to the one in Phitsanulok so it must have been the inspiration for this temple. To the left of this picture you should just be able to see a painting of a stupa. In total there are eight paintings of famous stupas and chedis around Thailand in each of the alcoves. The ashes of King Rama V were interred in the base of the Buddha image in 1911. One of the reasons I like visiting this temple is because of the cloisters around the back. Here you will find a long line of 53 important Buddha images from around Thailand and also other Buddhist countries. Thirty three of them are originals and the remainder are scaled down copies of the originals. This remarkable collection was the idea of King Rama V. He asked Prince Damrong to travel around the country in order to collect important Buddha images. The result is probably the most important collection of Buddha images in one place as they represent different styles and periods. On the base of each Buddha image is a brief description in Thai and English. In total there are eleven attitudes or gestures of the Buddha which are represented by these statues. This is out of a total of about 80. If you are interested in the development of Buddha images then you mustn’t miss this important gallery.

You can visit the Marble Temple at any time during the day. However, to avoid the tour buses, you might want to come at the start or end of the day. Unlike other temples, the monks that reside here don’t go out on a morning alms round. Instead, the local people come to the temple between 6 and 7 a.m. to offer alms to the monks. There is also a nice canal here where you can buy fish or turtles to set free for good luck. There are plenty of seats where you can sit down in the shade and relax. You can cross the small canal by one of the two red iron bridges. There are other buildings around the temple that you can explore. Around the back you will find a large bo tree. It was under one of these that the Lord Buddha reached enlightenment. Apparently this tree grew from an offshoot from the original bo tree from Buddha Gaya in India. If you get time then do come and visit this temple. Entrance fee for foreigners is 20 baht. There are also donation boxes and you might one to give generously in order to help maintain this beautiful temple. I know there are plenty of other temples in Bangkok, but I think you agree that this one is quite unique and well worth a visit. I will tell you about other places to visit in the Dusit area in later blogs. As I mentioned before, over the next two months I will be bringing you blogs about my Top 10 favourite places to visit in Bangkok. 2 responses to “The Marble Temple”