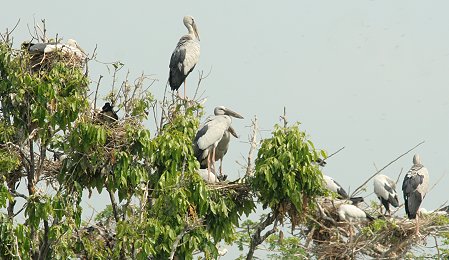 A few years back I heard about a temple on the banks of the Chao Phraya River that has an invasion of openbilled storks during our winter months. It has been on my list of places to visit for too long and so I finally decided today that I should go and take a look. Wat Phailom is in Pathum Thani which is a neighbouring province just north of Bangkok. I decided to drive there on the Kanchanaphisek Outer Ringroad. Samut Prakan is on the southernmost section which is still being built. The temple is at the far northern end. In theory it looked like I was going the long way round but due to the good road, I was able to reach the temple area in about an hour and ten minutes. Getting there was the easy part. Working out how to cross the river without a bridge was another matter.

The night before I left home I did my homework. I didn’t want to go all this way just for one temple. I was interested to see what else Pathum Thani had to offer. However, just about all the guidebooks let me down. They had nothing. The Lonely Planet had about two inches of column space on Wat Phailom and nothing else.  So, I decided to Google “pathom thani” on the Internet. Not surprisingly there wasn’t much. Our own www.ThailandGuidebook.com web site was second on the list and I think best of the bunch. I ended up doing a printout from our own website. I then left this morning armed with this and my A-Z of Bangkok and Vicinity (PN Map).

I decided not to leave the Outer Ring Road at Pathum Thani as I knew from the map that the temple was further north. I decided to leave at the exit for Highway 3111. I headed a short way south until I reached Wat Samakkhiyaram. I parked my car beside the Chao Phraya River. On the other side I could see a temple which I presumed to be Wat Phailom. According to the Lonely Planet I could catch a ferry across. I couldn’t see any boats at all. I wandered around until I found someone I could ask. He confirmed for me that Wat Phailom was indeed on the other side of the river. H said he would take me there for 20 baht. I asked if he would wait but he said “no”. However, he said he would give me his mobile phone number and I could ring him when I was ready. Fair enough. So, I crossed the river in a small long-tailed boat.

He didn’t take me straight across as expected to the big temple building but rather to another jetty a little further downriver. I asked him about this and he said that there were three different temples all next door to each other! Certainly confusing. But, no mistaking that I was heading towards the right direction. Flying overheard were hundreds of Openbilled Storks. I disembarked at the small landing and waved goodbye to my boatman. It looked like I had the place to myself. I walked up a path until I reached the entrance to a boardwalk on my right. A notice in Thai said that this boardwalk is sometimes covered 1–2 metres deep during the floods and is in desparate need of repair. It called for funds. It also called for extra caution as the planks looked very rotten in places. 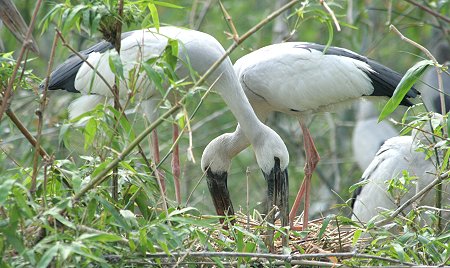 By this time the murmuring of the bird’s chatter started to rise in tempo. I turned a corner and I was immediately in the middle of a set for a Hitchcock movie. You know, that one called The Birds. They were everywhere and they were large. And they were making a lot of noise. There was also a distinct smell of ammonia in the air though it wasn’t overpowering. Up ahead I saw a watchtower and decided I would climb to the top to take a closer look. As I ascended to the tree tops I became mesmerised by the unfolding scene in front of me. There was so much action going on and it was happening 360 degrees around me. I couldn’t believe how close I was and they were just ignoring me. It was such a wonderful experience being up in the tree tops with them and being able to observe them. I thought I would be popping over the river for 20 minutes but I ended up staying more than an hour.

The open-billed storks are so called because of a small curve in their long beaks. When they close them there is a gap inbetween. This helps them to grip onto the freshwater snails which is a favourite food of theirs. They come to Thailand during the Winter months. They are usually here between about November and March. Sometimes as late as June. The storks nearest to me were busy building a nest. Just one tree probably had 20 or more nests. Some of the nests even had eggs. I was just wondering how long it would be before they hatched when I spotted another nest with birds that had already hatched. This was so marvellous. I was seeing everything. From the making of the nests, laying eggs and then finally the freshly hatched eggs. I am not sure the exact number of storks, but there were literally thousands. This was a major habitat for these birds. And here I was, the only person observing them on this Sunday morning.

After I climbed back down from the tower I wandered around the temple a bit. I passed a solitary monk who was watering some plants. I then decided to head back to the river. Apart from the monk I didn’t see anyone else. I rang the boatman and asked him to come and pick me up. While I was waiting for him I made plans for a return trip. I decided that the next time I would come in the late afternoon to get a different light. The colours of the setting sun would be good on the birds. I made it safely back to my car. My day wasn’t over yet though I had already experienced the highlight. My next stop was Wat Chedi Thong a short way up the road. This had a good example of a Mon style pagoda which was over 160 years old. As I was now not too far from the Bang Sai Royal Folks Arts and Crafts Center I decided to go and pay a return visit. I will tell you more about this another day.

For instructions on how to reach Wat Philom, please visit our ThailandPhotoMap.com website.