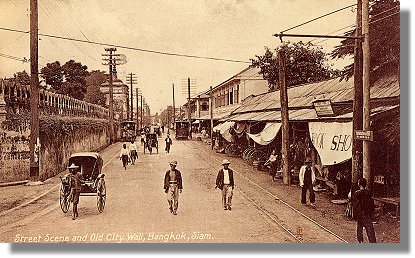 This postcard shows a street scene in Bangkok. Notice the old city wall on the left. The only section left today is on Maha Chai Road. On the right are the tram tracks. You can just see a tram in the distance. Notice the electricity poles and wires starting to get out of control. Anyone who has been to Thailand knows what a mess it has become today! A Statue of Queen Victoria outside the British Embassy in Bangkok. The statue is still there today though after a big chunk of land was sold by the British government the statue had to be moved.

“Queen Victoria’s statue was, in the words on the plinth, “erected in loving memory by her subjects in Siam 1903”. The statue is particularly respected by Thai students; the late Queen’s intercessions may have assisted academic achievement in Bangkok. The statue was boarded up during World War II, but the Japanese kindly provided a peephole so that Her late Majesty should not be upset. The War Memorial was paid for by British residents in Thailand and was erected at the beginning of 1923. It was in fact the first structure on the new site.” – British Embassy website 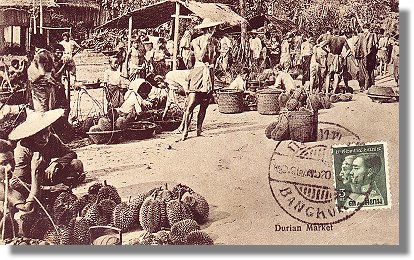 For hundred of years, the King of Thai fruit has been the durian (pronounced “too-rian” in Thai. Please click here to see the other old postcards that I have posted before. If you are interested in pictures about Thailand, then make sure you visit our increasingly popular ThaiPhotoBlogs.com website. With its high google ranking, it is now receiving over 3,000 unique visitors a day. A number which is increasing all the time. I will later show you the top 10 news photos for 2006 which have been posted on that photo blog. Also, if you want to keep up-to-date with the latest news about the Bangkok Bombings and the rumours of the Counter Coup, then make sure that you visit our popular ThailandScribe.com news site. We search hundreds of news sources around the world for all the latest news about Thailand. This is then updated on the site every 5 minutes. This site is invaluable to anyone who needs to know the latest events in Thailand.

One response to “Old Postcards of Bangkok – 03”