Is Corruption Just A Social Normality?

(Walking an elephant on the streets may be illegal, but is it also just another attraction of Unseen Thailand?)

(The following blog was published yesterday on the Opinion Page of ‘The Nation’ newspaper entitled – ‘Corruption From The Cradle To The Grave’. Here below, however, is the originally submitted un-edited version)

Ever since the ousting of the former prime minister, much has been said and written about corruption at its highest level, but perhaps it could be argued that the essence of corruption is as embedded within every class of Thai society as making merit at the local temple.

Instead of simply pointing our fingers at Thailand’s most powerful and blaming them for all the country’s corruption, let’s go deeper, have a look in the mirror and delve into some of the amazing roots.

Let’s begin with the good old-fashioned upcountry family. Even before a toddler can walk and talk, his delirious daddy on his unlicensed motorbike is already showing off to him, his amazingly wicked driving skills. Approaching the dreaded traffic lights with half the family packed on the back like a row of squashed sardines – he shoots left, then right and takes an awesome dare-devil u-turn. ‘Toddler’ is thrilled at how daddy can save precious time swerving around the traffic laws and getting them back on the proposed direction back without having the burden of waiting 60 seconds at the darned red lights. Then, on approaching a traffic police box, toddler is again amazed at the way daddy, like magic, one-handedly grabs at his helmet in the front basket and quickly sticks it on his head like a clumsy construction worker. Next, a little later in the day, toddler with an innovation of daddy’s learns that it is absolutely pointless to stop for a red-light when there are no other vehicles around. Just drive straight through!

Besides daddy’s motorbike wonders in violation of so-called nonsense laws, toddler is soon taught more from his caring mummy. When she invites half the neighborhood to the house on a sunny afternoon to play cards in the living room, he is taught to ‘stay outside, keep guard and knock the door 5 times if he spots a police patrol passing by on his bike.

Having just grown out of his diapers, the toddler realizes that one of mum’s favorite times of the year, simply has to be the run-up to any kind of election. Opening the door to the arrival of candidates, she is delighted at the free bottles of fish sauce, washing detergent and fried mackerel. For dad, a small bottle of local plonk is also thrown in. Darling child just sits back and hears mum raving at the generosity of the candidate – what a fine gentleman indeed! Before he is even 5 years of age, the average countryside kid learns that ‘if you want to win the hearts and minds of the local villagers you need, only cash’ 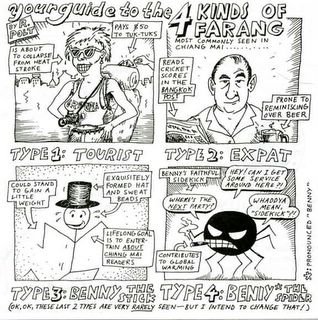 A year or so later and it’s time for school and of course – getting decent grades! The young student however, soon realizes that the most efficient method for securing high grades, besides only working hard in the classroom, is to attend the private weekend or evening classes run by some of his teachers at their homes. On paying the monthly private tuition fees, he will be scoring top marks for his homework assignments and even be given insightful information to the contents of the forthcoming mid-year exam.

After private class in the evenings, should the young student care to hang around a bit longer he may have the glorious opportunity to sneak a look through his teacher’s front curtains and witness her also dealing out cards to her friends. This time however, no guard is needed as the educator in charge is married to a high ranking policeman at the local cop-box.

Now, just when you thought the everyday upcountry student is taught the subtleties of corruption from a very young age, then you haven’t yet looked at the epicenter of kiddie corrupt conditioning – Bangkok. The average well-to-do Bangkokian kid can admire for himself, how his well-connected daddy is able to weave around the traffic laws with a brief flash of a fancy name-card of some relative or acquaintance preferably holding the rank of at least Maj. Gen. Should a traffic policeman have the nerve to question him further, the child will be thrilled at how daddy advises the officer along the lines of “Now buddy, the last thing you need is a telephone call to your boss about your failing eyesight”

Again, if parents’ finances work wonders with the Thai government school education system upcountry, it’s still nothing in comparison to what can begot in The City of Angels. For those who would care to get their kid into a fancy well-known private school, well even though their child may be as knowledgeable as a dodo, that is strictly unimportant, but a handsome donation is. Preferred donations appreciated by some reputable schools, very often with Christian-sounding names, include; a groovy minibus, 25 laptop computers or just simply a cash cheque to fund the engraving of the school’s main plaque – in gold. In fact, a generous annual donation to the school’s multi-million dollar budget will guarantee that the child can be a complete delinquent while the administrators just turn a blind eye.

A few years later and on graduating, it’s time for the beloved child to seek employment. With a certificate in one hand, it is also vitally important to have a ‘noodle’ (sen = connection) in the other. So, just a couple of days before the big day of the interview at a prestigious company, good-old daddy has to diligently call around to all the ‘noodles’ who spring to mind asking for their valuable assistance in winning the job. Should all the applicants have a worthy qualification of some kind, highest preference will be afforded to the one with the most or/and biggest noodle.

Many foreign ex-pats here in Thailand may be up in arms at such injustice and lawlessness but a great percentage of them are just as bad or even worse. Every week, we can read ‘Letters to the Editor’ moaning about the lack of basic law enforcement in Thailand. But, just how many ex-pats enjoy corruption of some type? Innumerable ex-pats love nothing more than explaining to newcomers – where to get a beer on a Buddhist holiday, the amount of ‘noodle’ name-cards they have collected and the appropriate sum of money to stuff under the traffic policeman’s helmet. Complaining at the lack of law enforcement one day, they are furious the next. When on drinking at their favourite bar at 2am there are fuming mad when a local law enforcer whizzes past on his bike and orders the bar – closed.

Next, for the long-term ex-pat facing legal obstacles, there are plenty of law firms to turn to in times of trouble. With the help of his wad of cash and the company’s ‘noodles’ – legal miracles can be had. So, perhaps some of the ex-pats ought to be a little bit more careful with some of their one-sided whining, as they are as fond of bending the law as the locals.

So, what with so many folk participating and enjoying the benefits of corruption since a young tender age, does this prove that perhaps corruption on a basic level is simply a social normality, accepted and practiced by people of every class?

Or/and is it also because Thailand has just so many uncountable laws that many of them only exist to be broken?

10 responses to “Is Corruption Just A Social Normality?”