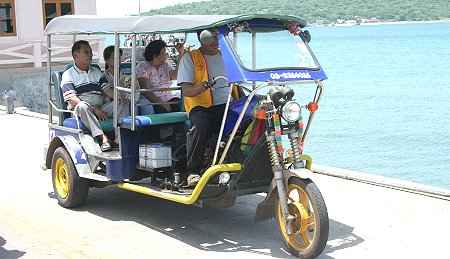 Although Ko Si Chang is the nearest major island to Bangkok, it doesn’t really get that many visitors. Sure, on holiday weekends it can get a little crowded, but not like other tourist destinations. If you like peace and quiet, then just make sure you come here during the week. For 250 baht (about $6) our sky lab driver was giving us a tour of the island. Even if we were going to stay the night, I think we would have still done this tour as it was turning out to be a good introduction to the island. I am sure the driver would have taken us to a hotel first to drop off our bags before continuing with the tour. Then, on our second day, I think we would have probably rented motorcycles (also 250 baht per day or 80 baht per hour) in order to explore the island at a more leisurely pace. 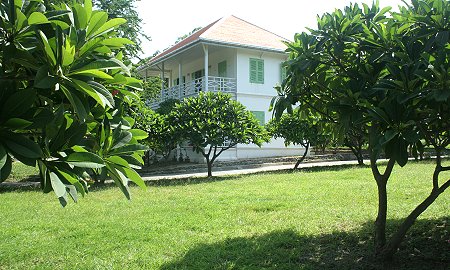 For our third stop of the tour, our sky lab driver (they use this name in Thai) took us Phra Chuthathut Palace. What is fascinating about this island is that three past kings (Rama IV, Rama V and Rama VI) all came here with their wives and children for a holiday. King Rama IV came here in the mid 1850’s for the fresh air and beautiful views. Though he never actually slept on the island, opting rather for sleeping on his boat. It was Rama V who built the palace as a kind of convalescence home. In fact, one of his sons, Prince Chuthathut was born here and so he named the palace after him. Rama VI came here as a child. A  number of the buildings still remain today. However, a teak wood mansion was never completed due to border incursions by the French in the 1890’s. It was considered to be too dangerous to vacation on the island any more and the building was shifted to Bangkok in 1899 where it became the famous Vimanmek Mansion.

You could easily spend a few hours wandering around the grounds. There is a museum inside the buildings and also a restaurant. If you are feeling adventurous, you can climb to the top of the hill where there stands a white chedi. Normally these religious buildings are solid and you cannot go inside. However, this was the first one I had seen that had a small chamber inside. It was here that King Rama V came to meditate. So, it was an honour to stand on that spot. And also, to be the only one there. I think it is probably a great place to meditate as it is so peaceful and there air is so fresh compared to what we have back in Samut Prakan. On the way back down I passed a “bell rock” which indeed sounded like a bell when I hit it with a stone. Nearby was an old stone pagoda that had been renovated. I counted about seven gardeners that were working on the grounds. Cutting grass and clearing weeds. It is worth staying here longer and maybe having a picnic on the lawn in the shade of the trees. 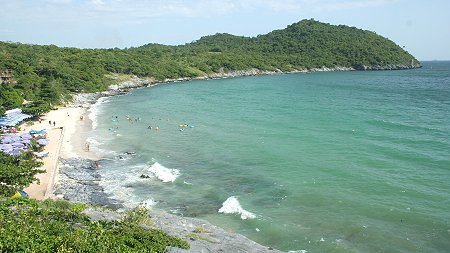 The final stop for our grand tour of the island was Hat Tham Phang (Tumbled Cave Beach). I had read that there wasn’t really any beaches to speak of on the island, so I was pleasantly surprised to see so many people swimming in the sea in this bay. The water looked very clear and very inviting. Unfortunately we hadn’t brought any of our swimming gear with us. So we could only relax on the deck chairs and soak up the atmosphere and the fresh sea breeze. If you like, you can eat on the beach as there is a restaurant here that will bring food to your deck chair. The hotel rooms in this bay are fan only and cost about 500 baht each. The island isn’t really that big and I guess if you are going to rent a motorcycle for the day then it doesn’t really matter where you stay.

Our sky lab driver came back to pick us up at the agreed time and whisked us back to the pier just in time for the 5 p.m. boat. It had been a really good, though a little exhausting, day out on the island. There was a lot of climbing involved, though like I said before, not everyone bothered to climb up to the viewpoints. Depends on how much energy you have. You really need to take your time when you come here. I would suggest that if you can, you should try and spend at least one night. But please, don’t come here expecting white sandy beaches and parties all night. You will be disappointed. This is a great place to come and unwind and just relax. We will certainly be coming back to spend a few nights here in order to explore this fascinating community a bit more.

The drive from Samut Prakan to Siracha is quite quick and straightforward. The 100 km trip took about 90 minutes to the pier. From Bangkok, take the elevated highway above Bang Na-Trad Highway until you reach the end. Then turn off onto the Chonburi Bypass following signs for Pattaya and Bangsaen. After a while you will see a sign for Siracha and Bangsaen which will take you back to Sukhumwit Road. As you reach Siricha, you will come to traffic lights with some school buildings on the left which are shaped like ships. There is a blue tourist sign before the lights which clearly tells you to turn right for Koh Si Chang. A short while later you will reach a roundabout. Turn right here and you will see the road leading out to the pier. It is a popular relaxation area for locals as well so it can get crowded. If you are coming from Bangkok, catch a bus from Ekamai to Siricha. They leave every 30 minutes and will take at least two hours if not more. From the bus stop you can catch a tuk tuk or motorcycle taxi to the pier. Just say you want to go to Ko Si Chang (pronounced “goh see chang” ).