The famous Thai epic “Khun Chang Khun Phan” has been around for hundreds of years. No-one knows for certain when it was first written. However, the events depicted in this classic story are believed to have taken place around 1500. The story was passed from generation to generation by word of mouth. It wasn’t until the 19th Century that King Rama II, King Rama III and other prestigious poets of the time, decided to collect all accounts of this story and then write a definitive version.

The following synopsis of the story is illustrated with photographs I took of the wall painting at Wat Pa Lelai in Suphan Buri. Phlai Kaeo (later Khun Phan), Khun Chang, and Nang Phim (later Nang Wanthong) are childhood friends in Suphan Buri. Phlai Kaeo grows up to be handsome, clever and brave, but he is poor because the King executed his father. He ordained as a novice monk so that he could be educated at the local temple. He excels in martial arts and develops a love of magic. Khun Chang is his opposite: bald, ugly, and crass but very rich.

By the age of 16, Nang Phim is the most beautiful girl in Suphan Buri. She meets novice Phlai at Wat Pa Lelai during the Songkran festival, and they have a passionate courtship. But, Khun Chang is also smitten by Phim and tries to win her through his wealth. Love triumphs. Phlai Kaeo leaves the temple and they get married, even though Phim can already see that he is a great womanizer. Only two days together after the marriage, Phlai is called up to lead an army on a campaign in the north. 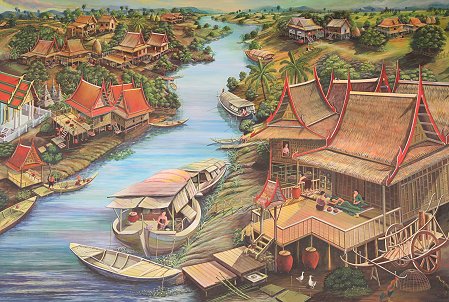 Phim falls sick from pining. The abbot of Wat Pa Lelai changes her name to Nang Wanthong to revive her luck. Khun Chang takes the opportunity of Phlai’s absence to spread rumours that Phlai Kaeo has died in battle and tempts Wanthong’s mother with his wealth. Wanthong’s mother consents to the marriage. Wanthong resists at first, but soon comes to enjoy a comfortable life and an attentive, faithful husband.

Meanwhile, Phlai Kaeo wins a magnificent victory in the north, and returns with his new fame as a great warrior. He also returns with a new wife, Laothong, who was a prize of the battle. The King gives him the title Khun Phan. When he reaches Suphan Buri he sees what has happened and commands Wanthong to return to his household. Wanthong and Laothong have a jealous quarrel. Things don’t work out and Khun Phan departs for Kanchanaburi and Wanthong stays with Khun Chang. But, before long, Khun Phan is separated from Laothong by the King as punishment for skipping royal service. He equips himself with a magic sword, a magnificent horse and a powerful spirit, Golden Child. Then he comes to Suphan Buri and kidnaps Wanthong from Khun Chang’s house in the dead of night. They flee deep into the forest. But Khun Phan kills two royal officials sent after them, and so becomes a wanted man. When Wanthong becomes pregnant, he decides to give himself up.

At the trial, he clears himself, but then angers the King by asking for the return of his second wife, Laothong. He is jailed. Wanthong visits and looks after him. But then Khun Chang captures her and takes her back to his home. There she gives birth to Phlai Ngam, a son with Khun Phan.

Khun Chang is jealous of Khun Phan’s son and tries to do away with him by abandoning him in the forest. He survives, but Wanthong decides to entrust Phlai Ngam to a monastery. However, a while later, Phlai Ngam runs away and is brought up by his grandmother in Kanchanaburi.

Khun Phan suffers in prison for many years. He is released when the King needs him to lead another military campaign in the north. His adolescent son, Phlai Ngam, joins him on the campaign. Phlai Ngam starts to follow in his amorous footsteps by winning the hand of Simala, the beautiful daughter of the governor of Phichit. Khun Phaen is again victorious in battle. The King is so pleased that he not only restores Khun Phan to royal favour, but bestows on Phlai Ngam the title of Phra Wai and two wives: his beloved Simala, and a daughter of the defeated King of Chiang Mai.

At the wedding, Phra Wai and Khun Chang get in a drunken quarrel, which ends in a court case. Khun Chang loses and faces punishment, but Phra Wai appeals for him to be freed.

Khun Chang petitions the King to regain Wanthong as his wife. At the hearing, the King insists that Wanthong cannot have two husbands and must choose between them. But she cannot because each has meaning for her in different ways. The king loses his temper and condemns her to death. Phra Wai appeals and wins a reprieve at the last minute. He gallops off on his horse to stop the execution. But, the executioner, on seeing the approaching horse, thinks the King is angry with him for delaying the execution. So, he immediately beheads Wanthong.

8 responses to “The Story of Khun Chang Khun Phan”