Seeking Both The Sublime And The Ridiculous 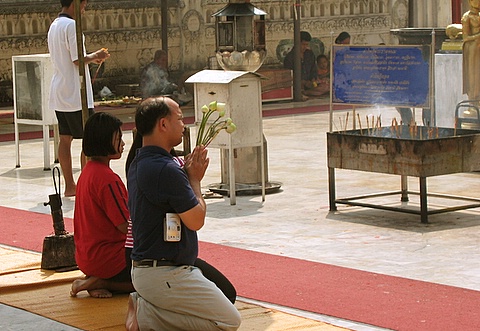 The other day I came across an old work acquaintance that I hadn’t seen for about 15 years. He asked whether I still spent my annual holidays in Thailand to which I replied yes. To that he asked quite pleasantly, aren’t you bored doing that every year. A bit defensively I said no I’m not.

It was a fair question. Ever since I was a teenager I had always wanted to roam the world and in my early twenties traveled to places in the Middle East, Europe, Asia, North America and one trip behind the Iron Curtain. But since 1977 I have pretty much devoted my foreign travel to Thailand with side trips to its neighbours in South East Asia. A possible lack of Imagination?

But one thing that I am sure of is that from that first hot sticky night in Bangkok in 1977, the Kingdom placed a hook in me that has never let go. To me Thailand has become an ever expanding horizon, which perversely means in some ways that I feel I know less about the place than I did in 1977. Since coming across Thai-Blogs and subsequently a contributor, the many wonderful stories and insights that I have read from other visitors/residents/nationals on this Website has again reinforced how little I do know (so much more to do – so much more to see)

But as usual I am drifting off the subject. The desire to travel, to see whats over the horizon has driven mankind from the beginning. In the main it has been for reasons such as conquest, hunger , curiousity and after the advent of mass tourism – pleasure. Apart from business travel and military invasion, the main reason people seem to board aircraft and ships is the seeking of “a good time”.

Once arriving at their foreign destination, how people seek this “good time” can be done in multiple ways. I once met a complete stranger at a BBQ in Australia who mentioned in passing that he also was a regular traveler to Thailand. I asked him what he liked doing there, to which he replied succinctly “slutting” in Pattaya. My first reaction was to pass him off as simply as a 50 year old male with more testosterone than good taste. But in fairness and with moral and legal considerations pushed to the side, I suppose the horny Farang was entitled to seek his pleasure between the sheets (If that was all that he was after)

One of the things I believe that makes Human Beings interesting is their sometimes simultaneous desire for intellectual stimulation married with simple amusement. Sort of like feeling your spirit soar during a night out at an Italian Opera and whilst driving home , drumming your fingers on the steering wheel listening to “Elevator music” on the car radio.

To be a well balanced individual, I believe that you have to find the synergy between intellectual pursuit, spiritual enrichment and the need to be able to kick back and simply enjoy and be entertained. In terms of travel to Thailand (although its really applicable to all countries) I’ve always believed that to compartmentalize experiences is a bit negative. For example to visit Thailand and only engage in “elevated” activities such as temple tours would be sterile just as at the other end of the scale – to participate in nothing more than Sex Tourism is equally banal.

That wonderful Thai expression “Sanuk” has always captured the positive force of experiencing life and enjoying as much as possible. To “seek both the sublime and the ridiculous” as this Blog is titled.

Of course no matter how much we might try for multiple and varied experience in our travels we tend to orientate towards a favourite. The favourite experience that I not so much seek but do look out for is that of the ridiculous. Not ridiculous in an angry assertive sense but for things that make you laugh and smile and that teach you not to take life or most importantly yourself too seriously. 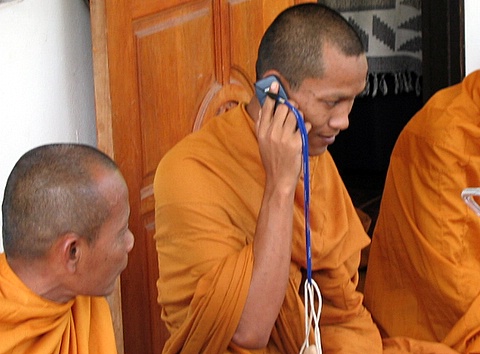 I have plucked two random examples from the many bouncing around my ancient and decrepit mind. The first one was a reflection of modern times. We had invited the village monks to our house in the village for a blessing. A few minutes into the ceremony and one of the senior monks ( see photo above) took time out to answer the mobile phone that he had with him. The call as it turned out was from another villager also inviting the monks to his house for a blessing. Hardly breaking his stride, the Monk recorded the fresh invitation in a notebook and then continued with the ceremony.

The second example was when Mali and I were sitting in a roadside restaurant at Pattaya which specialized in Pork dishes. A German family arrived at the entrance of the restaurant – Mum, Dad and their three young kids. What distinguished them was that they all had the same rotund body shape, wore identical rimless “John Lennon” glasses and appeared to be salivating whilst reading the menu. Finally Dad said in an audible “Homer Simpson” accent – “Mmmm!!! Schwein !!!!”

I agree that the above aren’t earth shattering anecdotes with the second probably only amusing because of the two or three Singhas that I had drunk that night. But that’s life – the most adhoc thoughts seem to filter out of our minds

I would like to finish this Blog by offering the following disclaimer:

3 responses to “Seeking Both The Sublime And The Ridiculous”