Stories….. From The Hot Season!

Guess you hadn’t noticed anyway, but I decided to take a short vacation from blogging and concern myself with ‘earning some proper cash’. What the heck, do as the Romans do and follow in the steps of Thai teachers who spend their school summer holidays teaching privates 10 hours a day at home. Not a bad job – earns an annual bonus equivalent to that of working for some fancy international company in Bangkok…..Oh well, maybe not!

So, howabout a blog of all sorts to start off the blogging season again?

Contrary to what the English language says, Thailand doesn’t really have much of a difference in seasons! You may be taught when you first arrive that there is a ‘cold season’, a ‘rainy season’ and a ‘hot season’. Shivermetimbers, but I gotta admit that I’ve never exactly been ‘that’ cold in Thailand, except perhaps for the times of being subjected to some Antartic-like below-zero air-conditioning on some overnight bus headed out of Bangkok’s Northern Bus Terminal.

Instead, Thailand prides itself in three seasons which ought to be more articulately named ‘pretty hot’, ‘rather rainy hot’ and of course….’darned hot’. Who am I to complain though? Certainly beats the seasons one finds in the likes of…..London. Now, most westerners on coming to Thailand usually have a problem with the heat at any time of the year, and can be witnessed prodding along the streets with a handkerchief stuck to their head, wearing a wringing t-shirt and sweatingly smelling to the heavens.

So, back to some serious blogging and how about a quick briefing on the lively events which have taken the country by storm…..or not! Now, what a fantastic month, April was – for elections! Just when you thought you had had enough of General Elections, we had General Election By-Elections, Senator Elections and some more frivolous elections at the end of the month for some local law-abiding local councilors. Not exactly fine times for the tax payer! Then, we had Farang-orientated Pattaya bar-beer owners up in arms cause every election meant that they couldn’t sell any alcohol for 36 hours at time! Of course this is not the first time when Farang bar owners or even tourists for that matter, have been brandishing such ‘temporary prohibition of alcohol’ as “What the heck have the elections gotta do with me? Just gimme a beer man!”

After the not so exciting General Elections which saw the reigning party battling its wits against other backstreet previously unknown political parties such as the ‘Farming Party’, ‘No Debt Party’ and ‘Be Moral Person Party’ the nation set itself ready for the ………Senator Elections. Just ask any old Thai person to the likes of “What does a senator in Thailand do?” to which you will be rewarded with some stumped look as if you just came down from planet Mars. Not only does no-one know (including myself) what the Upper Senate’s actual does besides opening now and then, but this year the public didn’t have a clue to whom half the senate-wannabes were.
Not much of a surprise really when the only way the hopefuls were allowed to promote themselves was by putting up pictures of themselves along the main roads!

What a great way for the electorate to decide on which candidate to vote for! Walk around, look at all the election billboards and decide which picture looks most worthy of running the country! At the end of the day, having a fancy/well-known name – sufficed winner yet again and the majority of the population could only decipher which candidate to choose from by their surname, something along the lines of “I remember his old man was a politician once, that surname rings a bell, let me vote for him!” How can you blame the folks however, when the laws regarding self-promotion are almost non-existent.

The only folks to make money from all these elections were the happy-smiling garbage collectors. Just waiting for the election booths to close, the garbage girls and guys were running around their local constituencies snatching up as billboards as they could possibly retrieve and selling them to garbage collection companies at 3 baht a piece. Not a bad money-making scheme actually, when you consider that places like Bangkok were plagued with literally hundreds of thousands of the things.

Talking about garbage collectors, I can’t think of any other career opportunity which has grown with such immense popularity over the years. Don’t get me wrong, I think these people have done wonders for the country, especially after the local authorities had failed to notice just how grubby looking a lot of the places were. In fact, there are so many garbage collectors now in Thailand that there is a lot of competition which has led to some bitter rivalry. Living at my school before, I was constantly asked by the school’s cooks/cleaners “When are you gonna chuck your garbage out? Don’t forget to save all the bottles for me!” Due to their eagerness, I just got into the habit of throwing the contents of my bin onto the balcony and let them sort through it all. I wasn’t so stupid too, advising them to “Do us a favour please, and mop the balcony after”

I must admit, that I haven’t always been too chuffed with the antics of the local garbage collectors. Just a few weekends ago at the back of me school, I sat down with the Bangkok Post and a big beer to enjoy the peacefulness of a Sunday afternoon. Half way through me beer, I decided that it was time for a snack of some potato chips, and left me seat for the short walk to the nearest convenience store. Thinking nothing of it, I left me bevvie next to my half finished bottle. In less than 3 minutes I was back and to my complete aghast, I sees the local hairy-moustached Indian garbage collector pouring out the contents of my beer onto the ground while folding up my newspaper to toss into his garbage cart! Seeing me approaching he apologetically replied to the likes of “Oooh, I am being very very sorry, I am thinking you already have finished” 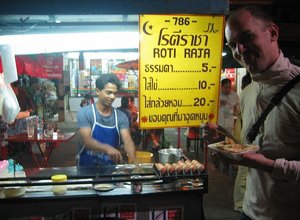 Now, I don’t mind the local Indian population in Thailand, I think they are fun. To this, I mean the Indian immigrants who have come over from India in the past few years to make a better life for themselves. Most can speak Thai pretty well, but their accent is pretty difficult to understand. So, what is the occupation of these immigrants, you may ask? Not really garbage collecting. Firstly, there are the ‘nut vendors’, probably the lowest paid job of all. There have been reports however, that some of them who sell their nuts to Farangs in the bar areas of Soi Nana/Bkk and Pattaya have made a small fortune knocking them off at 10 times the local price.

Next, we have the ‘roti vendors’. Thais enjoy the odd roti but unlike the Indian version, the Thais prefer theirs saturated in sweet-condensed milk and 8 tablespoons of sugar. There are quite a few Thai ‘roti vendors’ around, but just ask the locals and they will tell you that even the Thai can’t make a roti as delicious as the Indian immigrants. Talking about corrupting the old roti – it has been with the advent of backpackers over the past decade or so, that the population is now scoffing egg roti, pineapple roti, jam roti, banana roti and chocolate roti.

Finally, we have the affluent ‘money-lending’ Indians. The authorities have severely cracked down on their operations over the past 2-3 years, arresting half of them and deporting them back to India – but they are still around. Not exactly loved by the local Thais, they lend out money at extortionate rates of interest. The most popular sum being 20%. Quite a cheek these Indian money-lenders have though, when most of them are here on a tourist-visa!

9 responses to “Stories….. From The Hot Season!”