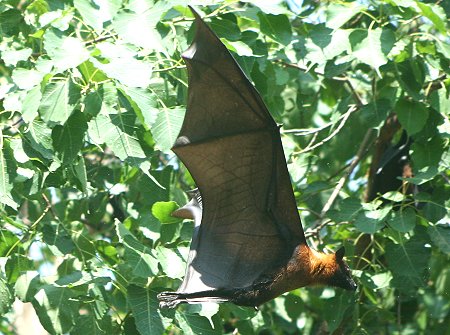 Today I visited Bang Khla district in Chachoengsao Province. The “Unseen Thailand” attraction here are the thousands of fruit bats (or flying foxes) that inhabit the temple at Wat Pho Bang Khla. This is another one of those unique places that you won’t find in any Western guidebook. In fact, the Lonely Planet doesn’t even mention Chachoengsao Province. This was my third visit here. You may remember me writing before about going on a boat trip to see the dolphins. There is a lot to see in this province and I have only scratched the surface. You do sometimes see foreigners here but they usually come with Thai friends and they only seem to be going to pay homage to Luang Pho Sothon. You never see independent travellers which is surprising as it is only 90 minutes away by train from Bangkok. And the cost of the ticket? I think only 20 baht or so.

Bang Khla is about 23 kms away from Chachoengsao city. You leave the city on highway 304 for about 17 kms. You then turn left onto highway 3121 for a further 6 kms. This area is famous for the mango orchards and they have an annual fair in March. It also marks the spot where King Thaksin stopped briefly with his troops after the fall of Ayutthaya. In the town they have a statue of King Thaksin as well as a memorial on the banks of the Bang Pakong River. However, the star attraction for this district must be the fruit bats. To be honest, I wasn’t too sure whether it would be worth driving out there today. In the Thai guidebook there was a picture that only had one bat! I was thinking that maybe it would be just our luck that the day we visited, that bat would be away or something. But, we weren’t disappointed. There were thousands! 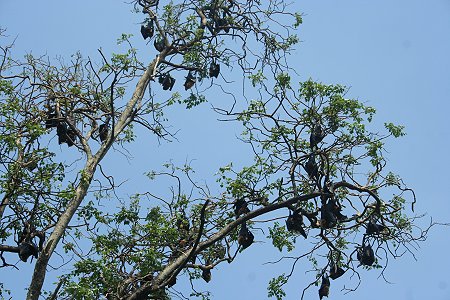 When we arrived at the temple it was the sound that first caught our attention. We then looked up and we could lots of dark things hanging from the trees. Then a huge bat flew over our car and landed in a nearby tree. I was actually quite surprised because I had always presumed that bats were nocturnal creatures and liked dark places during the daytime. But, these were pretty active. We were going to park right there under the tree but then I suddenly remembered my encounter with fruit bats in Australia. The liquid that comes out both ends is pretty foul and makes a mess! So, we parked around the corner and walked back.

Just about every tree in the temple compound had bats hanging from the branches. We asked a monk about the bats and what they ate. He said they ate fruit such as mango, tamarind and guava. They also ate the fruit and young leaves from the sacred boh trees in the temple. This is the tree that Siddharta Gautama became enlightened underneath when he became the Buddha. There is speculation that this has actually affected the bats behaviour. For example, they never touch the mangoes in the orchards of Bang Khla. They always go to a neighbouring district. Also, in 1957, the temple was having a special ceremony for 9 days and 9 nights for a sacred stone. During that entire period the bats just disappeared and weren’t around to bother the local people who had come to make merit. Then, in 1966, a revered abbot at the temple died. For days many of the bats refused to eat and didn’t fly out at night-time. A few days later, some of them started dropping dead out of the trees. 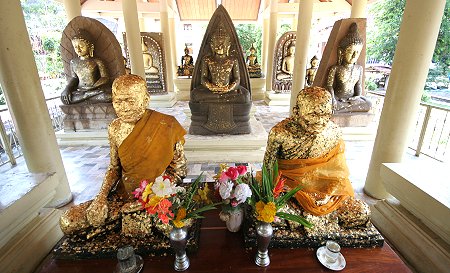 Wat Pho Bang Khla is actually quite an interesting place. The oldest building dates back to 1767. Also, in the compound, there is an array of extremely beautiful Buddha images. These seem to be based on famous Buddha amulets. I took some really good close-ups which I will get blown up and framed. The temple is alongside the Bang Pakong River which also runs through Chachoengsao city. I believe you can hire a longtail boat to bring you here or alternatively you can come by bus. If  you do get a chance then do come to visit this temple before any of the guidebook writers find out about it. Once that happens the place will change. Just don’t tell anyone else about this place! Let it remain in the “Unseen Thailand” category.

(I posted a few more pictures over at our sister site at thaiphotoblogs.com.)

This entry was posted in Chachoengsao. Bookmark the permalink.

6 responses to “The Bat Temple”