According to the That Phanom Chronicles, eight years after the Buddha’s death 500 Arahants and five lords of the five states headed by Maha Kassapa constructed the reliquary in the shape of a four sided kiln, eight to ten meters tall, and in it placed the breast bone relic of the Buddha. Over the past 2500 years the shrine has been restored several times and now stands 57 meters tall overlooking the town of That Phanom. 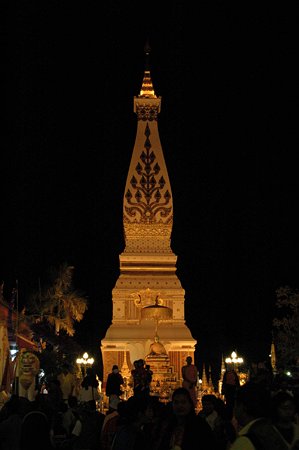 People visit the shrine throughout the year, but the most moving and auspicious time to visit That Phanom is during the festival that marks Magha Puja. This small town on the Mekong River, half way between Mukdahan and Nakhon Panom grows from a few thousand, to the size of major city, as tens of thousands arrive each day to make merit and worship at the shrine. This was my 5th visit to the festival. 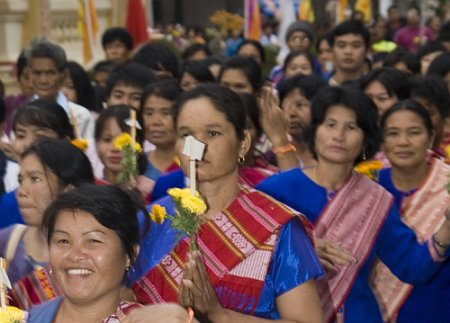 The first place to stop is the museum. It houses some quite interesting artifacts and information about the history of the shrine. There is also a set of murals that explain Buddhism in Isaan. From there, west of the shrine about 50 meters is a Bo-tree that is a branch of the tree under which the Buddha attained enlightenment and was brought here in 1952. Now it’s on toward the shrine. As you pass through the first door-way you’ll enter the cloister that makes up the outer wall where many of the monks at the festival will spend the night and in front of you will be the inner wall that surrounds the shrine. This wall has first built in the second century B.C. and has been rebuilt numerous times. Remember to take off your shoes when entering the inner wall. The That itself is surrounded by statues of past abbots and sometimes Buddha images from the cloister are placed around the That.
More about That Phanom and other Isaan places in following entries.

This entry was posted in Isaan, Nakhon Phanom. Bookmark the permalink.

3 responses to “That Phanom”