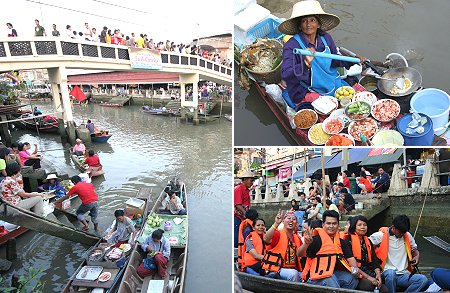 At the weekend, I drove down to Samut Songkhram to visit the King Rama II Memorial Park Fair. But, I also wanted to take this opportunity to visit the nearby Amphawa Floating Market. Unlike the famous one at Damnoen Saduak, this one doesn’t start to get going until the late afternoon. Very good news for late risers. It also means you can visit the nearby park first before finishing your day with a meal at the floating market. I am not going to pretend that Amphawan Floating Market is more photogenic than Damnoen Saduak. That isn’t true. You won’t see as many boat vendors here which means you will get a different kind of photograph. So, by all means, still go to Damnoen Saduak for your photo opportunity. But, if you have the time, also come to this floating market for the atmosphere which is so much better. It is also more authentic as you won’t find the rows and rows of stalls selling the same tacky souvenirs. The best thing about Amphawa Floating Market is that it is still relatively unknown among Western tourists as it isn’t featured in Lonely Planet yet. There must have been a thousand people there, but I didn’t spot one European face. This is where the Thai tourists come to experience a floating market. 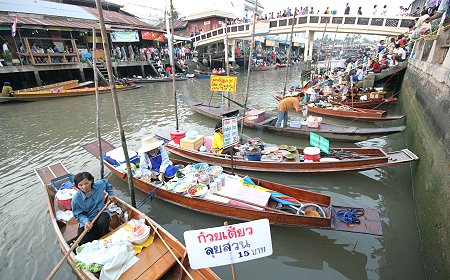 We arrived at the canal at about 3.30 p.m. We weren’t really expecting to see much as we had heard that the market wouldn’t start until late afternoon. However, as we walked towards the canal, we could see that a number of vendors had already set up their foodstalls along the Soi and more were wheeling their carts into position. There weren’t that many tourists yet so we decided to wander up the canal in a northerly direction. (This is beyond the pedestrian bridge you can see in the above photograph.) Although many of the houses lining the canal in this area were doubling as shops and restaurants it wasn’t long before we started walking by private residences. The front was open for most of these houses,  and we could see people inside lying down watching tv or sleeping. A bit voyeuristic so we tried not to stare. We carried on walking for a while until we reached another pedestrian bridge where we crossed and started walking back.

It was actually quite quiet and peaceful. I was starting to think we should have come earlier. Though of course it would have been much hotter. We then came across a couple of houses that were advertising homestay. This sounded like a great idea. We made a mental note to come back here again to do that. It would certainly be interesting to explore the area more while there were no tourists around. I had earlier seen pictures of monks rowing up and down this canal collecting food during their alms round. To see this you would have to be here early in the morning.

A bit further up we spotted a lady in a small boat paddling along the canal. Judging by the ingredients laid out in front of her it looked like she could cook pad thai for us. I was feeling a bit hungry so I called out to her and she came paddling over. I was right. We sat on the side of the canal bank while she cooked us some very delicious pad thai. I actually shot a video of her doing this and you can download it by clicking here. In the picture above, the bank is much further up, so the people cooking in the boats had a pully system hooked up. They put the meal in a basket and you then pulled it up! Very ingenious. 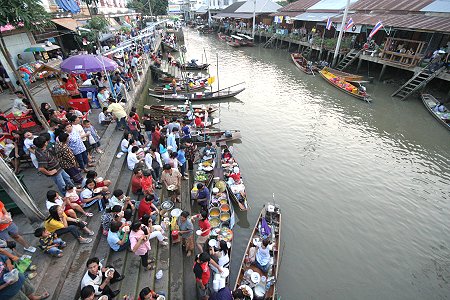 I will tell you about our boat ride to see some “Unseen Thailand” attractions tomorrow.

This was fast turning in to be my favourite floating market destination. So much to see and do.