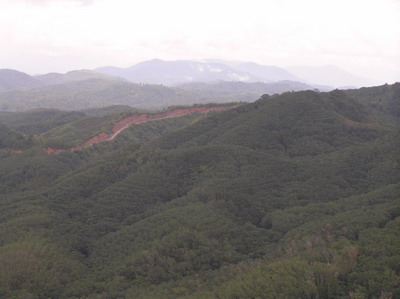 The other side of the road is Malaysia. 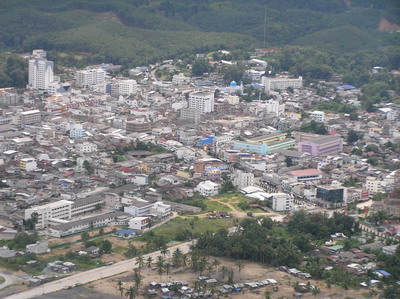 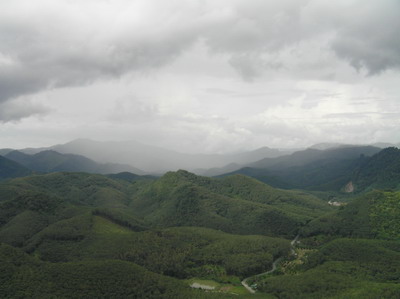 Lately, I had the opportunity to join an helicopter tour again. Though it was my second time, it didn’t keep me from being a little nervous while very excited at the same time.

This time, the tour was mainly for the Municipality photographers to take some nice pictures of Betong, to keep picture archive for brochures, development proposals and presentations.

As soon as we were safely buckled into our seats and the assistant satisfied with the safety precautions, he gave the pilots the thumbs up. The pilots deftly lifted the helicopter and we were off on a magical flight. Both sides of the doors were left open and therefore we could experience and feel the air and had a completely unobstructed view of the beautiful Betong.

The weather was fresh after raining. The first ten minutes of our flight was clear and gorgeous, after that it was drizzling and get pretty cooling in the air, with the open doors. It was a diverse feeling on top of the mountains in the drizzle.

The view was amazing, with tropical forest, waterfalls, vast area of rubber plantations surrounding Betong town. The layers and layers of mountains were particularly beautiful! I wish I was a poem or if I could write this in Chinese, then I could better describe the view and express my feeling!

The helicopter/The highest building in Betong-the 25 storey Merlin Hotel, expected to be completed end of this year

A Malay Village/View from top

Layers of Mountains/Hey, Mr. Mayor, it is dangerous!