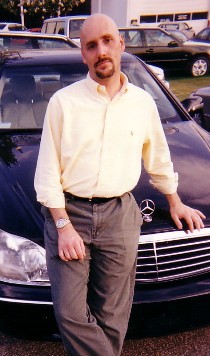 I suppose it had to happen sooner or later. For almost four years now living in DC I got used to not having a car or needing to drive. Of course not thinking about it my out of state driver’s license, long suffering from neglect, finally expired or rather it died of loneliness. That means instead of just exchanging it for a DC license now I have to jump through all the hoops of your typical 16 year old, first-time-behind-the-wheel teenage newbie to get a new one. Oh Joy.

However it’s a necessary evil, no license, no passport. No passport, no Thailand no matter how much I beg or plead or bat my cute baby brown eyes at the clerk behind the passport desk. No matter how much I think he might think they are cute anyway, right? Actually my plan for getting to Thailand is really pretty simple; get the license, get the passport, stuff as much cash in my bank account as I can along the way.

Once I have about 5 to 6 K squirreled away I’m ready to reach escape velocity. Goodbye Corporate America, the land of G.W. Bush, SUV’s, Mcfat meals and Mega Mall Suburbia, hello Land of Smiles! There’s not a day goes by I don’t think about Thailand almost to the point of being obsessive about it but in a good way not the deranged stalker way. Could you imagine a country filing for a restraining order? I hope not!

To me Thailand is my escape pod from the straight jacket of modern American life to true freedom. Instead of another twenty years punching the nine to five for a life the size of a 6 by 8 foot office space why not live each day in a life the size of a country bursting at the seams? At least that’s the dream that keeps me going and if it’s not reality then do me a favor and don’t wake me ok? Slap that snooze button and let me have 5 more minutes!

That said, my plan to get there is actually the easy part but lately I’ve been pondering once I get there, then what? If I manage to *gasp, shock* actual save 5 to 6 thousand (I know my shopping weaknesses) that would be enough to make a dang nice, bang up first class extended vacation. But after I make the Great Escape what do when I finally make it to Thailand and decide ‘uh-uh’ I’m not going back! I’m too young to retire (I wish) and too broke, looking inside my account at the moment is not too encouraging but my voice sure makes a nifty echo! Unless I suddenly win the lottery I’m going to have to get a job to stay there in paradise. There’s no skill needed to being a snazzy farang that lives, eats and breathes all things Thai but there’s also no money in that either at least danged as I am able to figure out. ‘Sides the odds of hitting the Lotto jackpot are just as good as me waking up tomorrow with a full head of hair like I was 16 again, now that would be a trick!

So what kind of skills or trades have I got to make me an asset for a visa to live and work in the land of Chii Wit ชีวีต, Chaang’s ช้าง and Golden Chedi’s เจดีย์? Let’s take a look…

Teaching?
The irony here doesn’t fail me that as bad a student I was in my school days I might possibly wind up being a teacher. I was never a dim bulb just always on the Kii Giat ขี้เกียจ side a little too much. That’s always been a big regret from my reckless youth that I didn’t do more with the chances I had.

I’ve got the skills needed most for the job to teach English to the little tykes and the bigger tykes too since I’ve been speaking it all my life! Unfortunately the rules have changed in Thailand over the years. Fifteen years ago or more that would have been enough but now you need degrees and experience and a resume the length of your arm if you want to make more than just enough to keep rice in your bowl.

Writing?
This is one I’ve kicked around a good bit, since I write here why not take a crack at writing a book there? Most definitely I’ll be writing about my experiences there as Alice through the looking glass recounting all my impressions provided once I am finally there I don’t fry on sensory overload! In fact two tools that are must haves will be a decent laptop and good digital camera. I plan to make a photo journal of everything I see over there.

Of course being a *hack* blog writer isn’t the same as being an accomplished novelist so we’ll see if I can conjure up the Great American Novel of Thailand. Heaven forbid I churn out yet another farang life-on-the-bar-stool paperback doomed to gather dust on the bookstore shelf. Actually since I used to be a freelance photographer the idea of publishing a photo book sounds really cool and I can’t think of any better canvas to sharpen my photo blog skills on.

Entrepreneur?
In my time I’ve worn a lot of hats in a lot of jobs. Maybe I can find some business to start. Since I love Thai food my favorite is to open a Thai restaurant somewhere on the beach. Imagine a beautiful Teak Wood bungalow right there on the sand serving the best Thai foods because I’ll steal the best Thai chiefs to come work for me. I’ll hire the most handsome waiters and beautiful waitresses to slay customers with Thai hospitality and charm. Reading Superman’s latest Ode to the Sarong I think that would be the perfect touch for my staff to wear the traditional style. A farang oasis in a Thai paradise. All this and every guests first drink will be on the house! I even have the perfect name, ‘Wit’s End’ can you dig it?

To me that would truly be the absolute best to wake up every morning in my place on the beach and living a life as easy and breezy as the wind blowing in on the waves. Maybe I could start more than one business; I know even paradise has its dark corners. There are kids living on the beaches there with no one to look after them and doing things no human should ever have to just to survive. I want to do something for them too. Help them find a better way to make a living and maybe get them some education so they at least have a shot to make it to adulthood. To be given the chance to live and work in a place like Thailand I owe big time to give something back. Whether it’s sharing the gift of knowledge teaching, sharing my dream by writing or giving back to the community and economy that’s a price well worth paying for the rewards.

Retirement?
Let’s face it, sooner or later I’m going to be old enough that the bod just can’t produce anymore. That’s an idea that hit’s closer to home now that I’ve passed the lifetime halfway mark although theres probably still another good forty years left on the warranty! No need for the old farangs home yet, however I do need a plan. Since I don’t think many farang jobs in Thailand come with a 401K package I’ll need to make my fortune plying whatever trade I wind up making a living on. Otherwise when the time comes, seriously, I will probably don the orange robes and live out my remaining days as a Buddhist monk in the arms of the Sangha.

Talking to my friend Vut about that idea this afternoon he doubted I could give up TV, mobile phones, internet and what not, not to mention *gasp* sex! I don’t see a problem as I got along fine without all that stuff before and I can do it again although I think I was about 8 years old when I lived without all that stuff no question! Actually doing without all that might make me live longer though I wonder if it’s ok for monks to drink Starbucks. Got to have my caffeine man! At any rate if you think I have the better deal for retirement here in the US don’t count on it. Social security won’t be around and living here in the US is just too dang expensive plus in the next twenty years I see the signs of a major economic collapse so best to get out while I can!

As it is this year will probably go down as one of my worst years ever. I went through a hellish ‘economic downturn’ that I barely survived but not without losing everything I had saved for getting to Thailand. That means my plans will probably have to wait another year at least if not two. I was one of the best producers Smithsonian Business Ventures had. I have certificates to prove it too and I worked my ass off for that company but in the end they couldn’t care less to toss me out in the cold.

Ironically now I’m working at a job that pays a lot more but I do a lot less work. Still, 9 to 5 in a little tiny cube can get awfully suffocating and its soul deadening to think of being a cube rat the next 15 to 20 years. But that’s ok every time I look at my books or see pictures of Thailand I know there’s a light at the end of the tunnel. I don’t know how and I don’t know when but it’s a given I know I will get to Thailand! Almost 40 years ago America put a man on the Moon with technology that today is practically primitive. All because someone had a dream, well that and the fact that our government threw $400 Million plus dollars at the problem to get us there!

Maybe all I have is the dream but that’s a start. Will I be a teacher? A writer? A bar owner? Mai mii arai, ไม่มีอะไร I’m free to choose! Maybe I’ll do all those things and more when I get to Thailand. Still it’ll be cool to welcome a newbie or ex-pat veteran to Wit’s End, hand him a cold beer and with wizened, been there, seen that eyes listen and trade some cool Thai tales. Who knows what will happen or what I’ll try but I remember hearing once that freedom is paradise and that’s good enough for me.

All pictures used in this blog (except those of me) are the work of photographer Todd Adams. You can vist his website here to see more of his work.

This entry was posted in Just do it!. Bookmark the permalink.