I was born in the year of the dragon according to the Chinese calendar (considered to be the luckiest sign), and in addition, it was a Saturday too, so the Buddha posture relevant to my birthday is the one sitting under the protection of the Naga. It is only natural that I have always found dragons and the related serpents fascinating and awesome. Even ancient Hungarian folk tales feature a scary fire-spitting seven-headed dragon that must be overcome by the hero: I guess it must simply belong to the “common subconscious” of the human race that dragons and snakes are looked upon with a strange mixture of respect and fear.

My personal journey over the past couple of years involved a lot of fighting and reconciling with my personal dragons living within me, and working with Chinese mythology and preschool children helped a lot to traslate my unspoken fears into feelings that could be dealt with more easily. The Nagas in Chiang Mai also captured me – I have a Naga-collection, dozens of photos, unfortunately, not in digital form. I’ll make up for it next time I’m visiting the temples….

But here I am, digressing as usual…. initially, I set out to write a post on the topic of Nagas, not my personal experience….

As I started to collect legends and ideas from the net, I soon discovered that the topic was so huge and well-researched that it could easily provide material for a doctoral dissertation…. I have come across several comprehensive and professional sites, which I enjoyed browsing in the past two or three weeks, usually instead of a gruesome translation job, sure. This one is about Chinese dragons the wikipedia entry into European dragons has several good links, over here and an Asian summary

A Chinese dragon on a tombstone in Kenting, Taiwan

But let’s just focus on Thai / Isaan culture and its roots, to keep it relatively short, but just as interesting, hopefully.

The Lord Buddha and the Naga

As the Lord Buddha went about his mission preaching to his disciples and followers, Naga, the serpent king watched in fascination and soon aspired to be one of the disciples of the Lord Buddha.

Having the power to take any form, the Naga transformed itself into a human and mingled in the group of the disciples, listening to the sermons. Evetually, it was ordained as a monk. However, shortly afterwards, when the Naga went to sleep in a hut, it accidentally returned to the shape of a huge snake, scaring the other monks as they woke up in the middle of the night. The Lord Buddha summoned the Naga and told it he may not remain a monk, and the disappointed snake began to cry. So it was given the Five Precepts as the means to attaining a human existence in the next life when he can be a monk, and it was also forbidden from entering temples until then.

So in Buddhist temple architecture, the Naga is either depicted coiled around the outer walls of the temple or along the stairs leading to the entrance to the temple.

A temple in Chiang Mai (it is unbelievably hard to find decent photos of Chiang Mai just browsing the net….)

However, the Lord Buddha had elicited such devotion from the Naga that in spite of the ban from monkhood, it continued to keep its vigil over the Lord Buddha, protecting him from harm. The statue of the Lord Buddha seated on the body of a coiled serpent and sheltered from the rain by the seven hoods of the Naga is commonly featured in the Buddhist sculptures of Northeastern Thailand.

It is said that one day while the Lord Buddha was meditating, Mara, the Evil One wanted to distract his concentration by starting a storm. The Serpent King, emerged from the roots of the tree where Lord Buddha was seated to offer protection from the rains and floods.

I chose this unusual modern sculpture, in Sala Kaew Ku, Nong Khai, it really scares me, I tell you, just looking at the picture…. 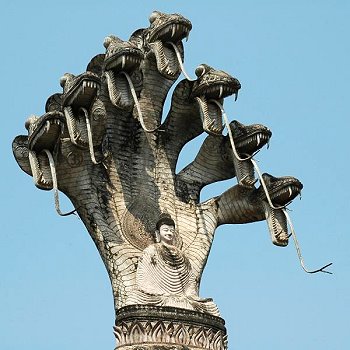