(I am leaving for my hometown, Sabah (East Malaysia), for a few days…so I had better finished my date…The Hala-bala.:))

After touring and inspecting the Hala-bala forest for some time, our helicopter stopped at the first border patrol police field camp on the fertile banks. At the request of Her Majesty Queen Sirikit, the border patrol has been stationed at Balahala since 1990, protecting the forests and watersheds. Wildlife has benefited from their presence. 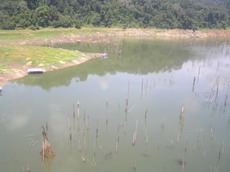 The first camp we visited is located at the left.

We also visited another camp site at the riverside, about 15 minutes away by helicopter, and had lunch with the police. I must say that the police cook better than I do! 🙂 It is indeed a lunch with a difference, spellbound with the tranquility of the rainforest.

Listening to Mayor of Betong & Some of the patrol police

There are chalets for visitors at the camp sites. During normal days when the river is full, the visitors can come by boats. However, currently the water is half dried so the visitors can only take the boats halfway and have to walk here.

Parts of the camp site

According to the police, a herd of around 20 rhinoceroses roamed the grasslands near the police camp sometimes, unperturbed by people. There were elephants, wild pigs, deer and otters appearing too….Besides, the police often found footprints of tigers along the river banks. Asking whether the wildlife will attack people, the police told me that they live together ‘peacefully’ …..thanks to the good work of the border patrol police and the sustainable use of the forest by the indigenous people!

As I can speak Malay, I chatted with Din, the native. He has similar outlook features with the natives I visited before in East Malaysia and Cameron Highlands. Din is shy but friendly. He is 20 years old, married with 4 kids. His family of 10 live 20 miles away from the filed camp. Sometimes he came to the field camp to visit the police and sometimes to barter for food with other tribes of about 10 people,not living far from the site. The police told me that Din has learned Thai from them and can speak some simple Thai. I asked whether I can visit his house…he said it took two days to walk home and there are tigers on the way….