A caveat to any amateur (or pro) ornithologist reading this blog. This is neither an entry about my search for a new species of aviary mystique in the jungles of Northeast Thailand, nor is it an essay about Warner Brothers’ influence on Thai culture. No, the tweety birds to which I am referring were the ones I saw above my melon after being knocked flat on my butt at Wat Phra That Doi Tung. But I’m getting ahead of myself.

In April of 2004, I spent two weeks in and around Chiang Rai. I would either drive Pon’s father’s motorbike (a risky endeavor, I admit), take the bus, or ride with her uncle in his rickety Toyota pickup (he was the only person in the very entended family who had a car).

On one of my last days in Chiang Rai, Pon and I, along with about eight of her relatives (I kid you not) loaded up into this old pickup for a ride into the surrounding hills. One does not need to be a member of Mensa to realize that five or six people would be riding in the bed of said truck. I happened to be one of those windblown unfortunates. Suffice to say, at the end of that day, my milky-white skin ended up a beautiful BBQ’d red, not unlike moo daang! This in spite of using sunscreen. April in Thailand? Are you kidding? 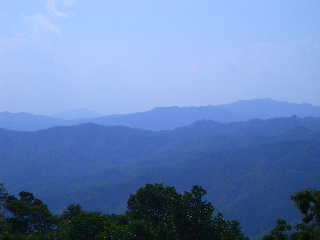 The view from Wat Phra That Doi Tung

After a long ride, we ended up at Doi Thung Mae Fah Luang Flower Garden. These beatifully manicured grounds sit around the “chalet” that was home to the King’s mother in her later years. She had it built to look exactly like a Swiss chalet, to remind her of the years she spent in Switzerland when her children attended school in that country. The gardens were beautiful, and I took several photos. Pictures were not allowed during a tour of the interior of the chalet, so I am sorry that I cannot show how it looked. It was very beautiful. I don’t think anyone lives in the residence now. Most of the rooms are roped off and left as they were when the King’s mother passed away in 1995. 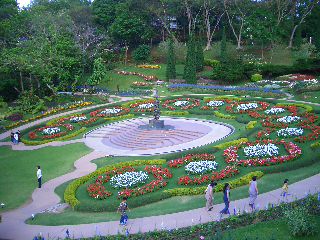 Some of the garden park

Not far from this chalet and garden park, sits Wat Phra That Doi Tung. One of the more interesting aspects of this wat is that it has Buddha’s left collar bone enshrined in a chedi that is draped with a saffron-colored cloth. 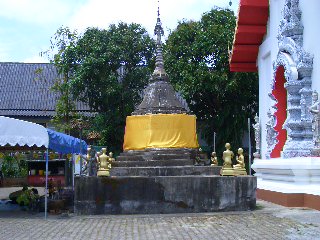 Another interesting aspect of this wat, is the walking path leading up to it from one of the lower parking lots. This steep ascent is lined on both sides by large bells. Hundreds of them going all the way to the summit. People going in both directions will retrieve sticks from the thick foliage, and bang each bell as they pass. The walk is anything but a time for introspective meditation in aesthetically-pleasing surroundings.

Upon reaching the summit, the climber is afforded gorgeous views of the countryside. So…I was walking around these grounds taking in everything. I spotted a beautiful vantage point from which to take of picture of the distant haze-covered hills. I knelt down by a bench to steady my view. “click” I took a couple of snapshots. Then I stood up..”BONG!!” right into a bell that was hanging next to the bench!

I don’t think that I was knocked out, but it took a moment to get my wits gathered back into my ringing noggin’. My sunglasses were sitting sideways on my sunburnt face. Embarrassment turning my already red face an even darker hue of scarlet. I was flat on my back, my legs splayed akimbo. A nice purple knot appeared almost immediately above one eye.

I sat up amidst the flashing stars and looked around; my eyewear still draped precariously off of one ear and part of my nose. Such a sight I must’ve been. Bystanders’ concerns for my well-being were quickly dispelled as I sat up. This concern was replaced by the urge to chuckle at the clumsy pink-faced Farang sitting on the flagstones, blinking slowly and surveying his surroundings. I had to laugh myself as I stood up and brushed pine needles off my keister. A truly memorable day for me this was..at the Wat of the Tweety Bird. 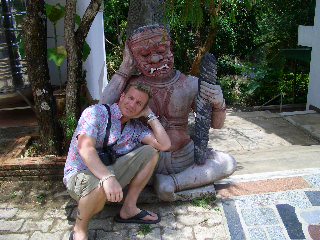 This entry was posted in Chiang Rai, Guest Writers. Bookmark the permalink.

9 responses to “Tweety Birds on a Chiang Rai Hillside”