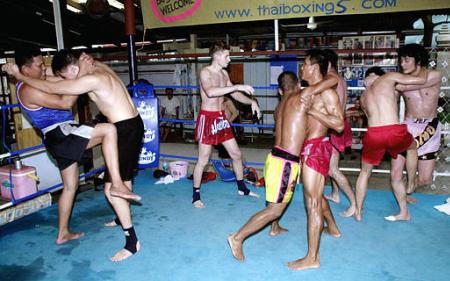 Life has certainly become a lot more hectic recently. I’ve had a whole legion of enthusiastic new students knocking on me door asking to learn English. Then on top of that, I’m busy helping me fiancee with our wedding arrangements for October. But, I started this ‘bloggo section’ of mine, so I just gotta keep the train moving. After a sordid series on our nation’s beloved ‘People in Power’ I thought I’d pit-me-wits at knocking up a new series on pretty funny but true stories that have left the nation’s ‘news crazy’ folks creased up in laughter.

There are many advantages about speaking and reading the country’s language. You can read where the darned Bangkok buses are actually going, enjoy a decent meal, and definitely one of the best advantages is being able to watch the Thai news and read the daily Thai language newspapers. So for this week, I thought I’d share with yous all, a few absolutely wacko stories.

Us foreign tourists can be a pretty gullible lot for ‘getting cheated’ and my fave ‘scam some cash outta the Farang schemes’ has to be one fiasco that goes on in Pattaya. Every now and then, a Thai boxing festival is set up for the Farang tourists to go and witness for themselves a group of ‘supposedly’ grade A Thai boxers fighting for glory. Now, gambling is actually illegal in Thailand but, there are a few exceptions. There is the ever popular government lottery of course but besides only this you are allowed to gamble at the major boxing stadiums to the likes of ‘Lumphini’ and also at the country’s ‘Horse Racing’ tracks. Of course you aren’t allowed to gamble at the so-called Pattaya Boxing Festivals, but who gives a darned, This Is Thailand.

Once at this ‘supposed’ festival, which I went along too, there were dozens of massive big-bellied Germans with their stick-insect Thai girlfriends sat on the back of some rented Harley Davidson Bikes and a whole squad of English football hooligans too out to gamble for the night on the supposed ‘hot’ boxers of their choice. A whole pack of Thai guys soon arrived and within no time at all the Farang tourists were betting loadsa cash against these Thais. What a farce! We had one boxer who resembled some six-foot four mean-looking Israeli soldier straight out of the Gaza Strip up against against this chopstick boxer who looked like a Victory Monument beggar. Going into the fourth round, all the Thai guys shouted out to the likes of 1,000 baht on the crappo skinny boxer. The Farang guys thinking these Thai guys were pretty stupid at wagering on such a potential ‘loser’ were soon flashing the cash. Of course, the boxer all the Farangs bet on soon lost his momentum and was remarkably knocked-out soon after after a blinding upper-cut.

You must have been pretty dumb not to realize that every one of the fights were ‘set-up’ as a scam to replenish all the cash from the drunkard Farangs ongoers. If that wasn’t enough, all the Farangs were also charged a 500 baht entrance fee! (I paid the Thai price of 50 baht!)These so-called boxers should have won a trophy for their acting skills! As for the Farang guys they were soon fuming after beginning to realize that had been scammed for thousands!

All the Thais know that many a big Thai Boxing fight has been set up over the years and one classic had to be one that was shown live on Channel 7 a few years back. Here, we had one famous Thai promoter who enjoyed dressing up like that beaver-head American boxing promoter ‘Don King’ and one Sunday afternoon was seen showing off his new superstar to the TV cameras, who he had promised ‘Would knock the living daylights out of anyone!’. Well, hearing this fantastic news the arena’s audience were soon flashing their wallets around the ring, sure they were ‘Gonna make a killing’ on this fight.

What a great start! Thailand’s Don King’s new ‘whipper-snapper’ boxer was running around the ring smacking the other guy to shreds. That was until the third round. Our gallant boxer had suddenly decided to impersonate an intoxicated chicken and run round the ring trying to ‘slap’ the referee in the face instead. His opponent didn’t even need to throw a punch as our Thai ‘Rocky’ superstar just tripped over his own foot, fell down and was out for the count.
It was found out later that the promoter ‘Thailand’s own Don King’ had gambled several hundred thousand on the actual opponent and so the rag his corner had used to sweat the boxer’s brow at the end of the second round had in fact been doused in some sort of ‘Knock out Lotion’ normally used by surgoens. Guess his trainers just over did it a bit.

One of my fave stories has to be the one from last year that made the news headlines. As I’ve written before, our Thai friends just love having a party, playing cards and getting ‘sloshed’. Now, one of the most fun type of parties here in Thailand has to be the ‘Funeral Party’. After paying their condolences to their dead neighbour the party on-goers are soon having a right fun party at the deceased expense. On going home for the night they are all hoping that someone else soon ‘kicks the bucket’ so as to have another ‘fun night out’. So, just last year or so there was a story from the province of Nakhorn Nowhere that went something like this.

A fine funeral party was going on and all the attendants decided to ‘play cards’ and gamble their hard-earned salaries away. That was until the local police arrived to ‘do the bust’. Of course, all of them dashed out the windows and back door only for the police to say ‘Darned, all the scum have fled the scene’ with only the dead corpse of the deceased remaining in his coffin. Not so. After inspecting the crime scene one of the police suddenly heard this repititious ‘hic-up hic-up’. The cop on hearing this, asked his colleagues ‘Did you hic-cup?’ ‘No’ came the reply from every single one of them and so they asked each other ‘Well, who the heck has the hic-ups?’ Of course, none of them did and the police queried ‘Is it possible for a corpse to hic-cup?’. Sure, our finest cops aren’t exctly a very stupid bunch and decided to go and ‘tickle’ the dead body just for the fun of it! The supposed ‘dead body’ with tears in his eyes jumps out of his coffin and coffesses to the likes of ‘OK I’m not the dead body! The dead thing was lying under me!’ Of course, our gambler friend on being rather slow on fleeing the seen had jumped into the coffin on top of the dead body hoping the police wouldn’t realize. Unfortunataly for him he had just one too many whiskey and sodas that evening.

Talking about the police. I can remember a couple of years ago when the police complained to the media about a certain Ladyboy who was under their custody. What was the problem? you may ask. Well, after the Ladyboy’s capture and failure to pay a lowly fine for gambling or something like that the police could do nothing but lock the Ladyboy up for a few days in lieu of being unable to pay the fine. Probably for the fun of it, the comedian guards stuck him/her in the men’s cell. Well, after a few days the police said to the Ladyboy ‘You can go home now’ only for the Ladyboy to reply ‘I don’t want to leave, I want to stay here, it’s great being locked up with a few friends!’ So, the police just let the Ladyboy stay put and after a few more days the police had to virtually handcuff the Ladyboy and throw him/her out into the streets after they had realized that this certain Ladyboy had been having lotsa ‘fun’ with the other randy inmates every night.

Then, just last week we had the pretty hilarious goings-on of a certain farmer and his wife up there in the north-east. This is the story. Our farmer friend had just managed, to his great relief, to secure a loan for 50,000 baht and being a supposed ‘model husband’ had given his wife 49,000 baht to look after while he kept 1,000 for a night out in town with his buddies. Well, our farmer friend must have been having a splendid night out celebrating as he got so unbelievably drunk that on arriving home he ordered wife to hand over the other 49,000 baht to finance his night out. Of course, his wife wasn’t haven’t any of this and slammed the door in his face!

Infuriated at the disobedience of his wife, the farmer managed somehow or another to get his dirty hands on a small childrens’ water gun. Running back to the house with the wife fast asleep, he immediately ordered her at gunpoint to ‘flash the cash’ or she would be shot! Taking the wicked threat seriously, she quickly hands over the cash and he runs back to join his friends. One plus one equals two and after a quick chat with her neighbours she realized he had been ‘taking the pish’ and swore her revenge! She soon spotted her beloved husband in a local open-air bar surrounded by an entourage of sexy dancers. Infuriated at the capers of her loved one, she went up to the table and slammed him in the back of head with the family’s huge water pot.

Hospitalized for a couple of days cause of his head injuries, he told the media ‘Please tell me wife that I didn’t mean it. I still loves her. I just had a few too many to drink!’ Well, the wife must have been pretty stupid too, as when being interviewed by the media she burst into tears and says ‘Oooooh, I’m so sorry too, I shouldn’t have hit me husband so hard, I just hope he forgives me!’

And finally there is the ‘classic’ tale of a cartain Samlor Driver (Cycle Rickshaw/Tricyle Driver) that cocked-up his life so much that there is even a saying in the Thai language that originated out of him ‘Mue-an Samlor Tuk Huay’ (To behave like a Samlor Driver that has won the lottery). Quite a long time ago now, it hit the news headlines about this extremely poor Rickshaw Driver from Nonthaburi that had struck it lucky and won a huge two million baht on the country’s national lottery. Absolutely delighted with his win, he kicked his wife and mother-in-law out of the house and decided to ‘go on the razz’ as a single man. So, for the next few months, our Rickshaw Driver friend did nothing but party-it-up and have a whole string of adorable girls at his ‘beck and call’. He must have enjoyed himself so much that he gave his money away like pieces of paper and blew the entire sum of two million baht away within the spate of six months! Today, our Samlor friend, still single, can been seen once again driving his Rickshaw around the streets of Nonthaburi Town. And I’m not joking!