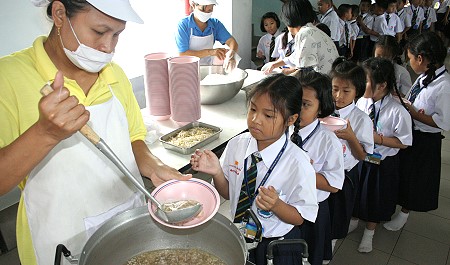 The poll for the best Thai School Lunch has now closed. A total of 646 students between the ages of 10 and 15 voted for their favourite lunch from a list of 20 meals. Here is the list:

School lunch tomorrow is one of my favourites, green curry with bamboo shoots. This came in at number 9 on the list. Surprisingly, one of my other favourites didn’t get onto the Top 10. This is Fried chilli with pork and long-beans which only pulled in 2% of the vote. What about your favourties? Are they in the top 10?

Bangkok has a large fleet of motorcycles which move efficiently through the traffic in a serpentine manner. These two wheelers are more efficient than the Tuk-tuks which are of course more colourful and fancied.

These motorcycles work as the most efficient taxi service in making you reach your destination much faster. The Japanese consultant, Mr. Tsetsumo Ohno was once mentioning to me that when the Japanese Ambassador was caught in a traffic jam in Sukhumvit Road while commuting from his residence for an important meeting (the sky train had not been commissioned then}; he promptly came out of his car and took the help of a motorcyclist to reach his destination in time. Apart from being a fast mode, the motorcycle also connects with efficiency, the inner residential areas.

Many youngsters also ride these two wheelers as personal means of transport. Once in Chinatown I saw two riders clash with each other. The accident occurred at 90 degrees at a traffic intersection, which was relatively less busy at 3 PM. The accident was mild, but both the riders were thrown on the ground. A helpful traffic cop came and helped them up.

There were no arguments between the riders each blaming the other. The police also did not admonish any one and within five minutes the riders departed in their own motorcycles. Such gentlemanliness is rarely seen in a place of accident. 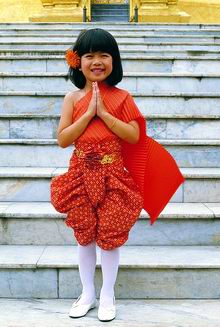