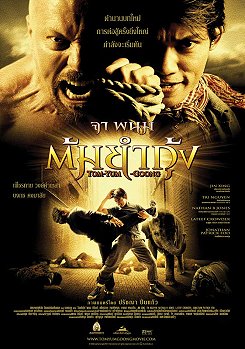 After a two year wait, we will soon be able to watch the sequal to ‘Ong-Bak’. Next weekend, the highly anticipated action movie ‘Tom Yum Goong’ will hit movie theatres in Thailand. Rival movie distributors have been asked to clear their slates for that weekend so that ‘Tom Yum Goong” can have a clean run. At 300 million baht, this is the second most expensive Thai movie ever to be made. (The most expensive one was of course ‘Suriyothai’.) It is rumoured that they will raise the price of the movie ticket just to help cover costs. I doubt this would be needed as it will surely do well in the overseas market. The previous movie took in US$15 million worldwide.

Check out the following site for trailers and photos. Also our forums for the latest news.

My half-Thai sibling – opposite faces

My aim was to blog at least once every Friday to coincide with Richard’s suggestion on ‘how to blog’ because I’ve also taken a full-time job recently. I realized it would be a better idea for me to move it to the weekend instead where I have more time. Anyway, onto my post…

I’ve mentioned in my previous blogs that I have a brother. This obviously means he is also a ‘luk kreung’ (half-Thai) but it is a little strange in some ways for me to think of him as a [half] Thai. We only have a year and five days age difference which is pretty close to same age and we’re both born in June under the Gemini (twins sign). As kids, we were sometimes even dressed in matching outfits and almost mistaken for actual twins. One wonders, “So if you’re both half, and you’re interested in Thai, then your brother must be too, right?” Not exactly.

We have both been exposed to western culture a lot more than Thai culture. Our western attitude would be considered more ‘American’ but I’d say that my brother drives that one home a lot more than I do.

It used to be that I was moreover my dad’s daughter and my brother, our mother’s son but our roles have switched too. Matt relates more to the western side of things in which he is able to relate to my dad better. I, on the other hand, were it not for my interest in Thai culture, probably would not have as close a relationship to my mother like I do now because Thai ‘stuff’ tends to form a bridge so-to-speak.

As far as I’m aware, my N’Chai (little brother) knows little about Thai culture and so he isn’t as familiar with the customs or traditions as I am aside from the major ones we do as a family like Loy Kratong, Songkran or Taam Bun (merit-making). Perhaps he knows more than he lets on but he doesn’t show it so I wouldn’t know for sure. We tend to stand on opposite sides of the fence.

However, in terms of appearance, I think my brother has quite a few Thai traits. For instance, his hair is black/darker than mine and he is also more tanned compared to the fair-skinned me. If there is one thing that he shows keen interest in, it is Muay Thai (Thai kick-boxing). I like Muay Thai too so I think that is one Thai bridge we both stand on. Maybe in future, he will see the interest in our Thai heritage as I already have and we can walk along the same Thai bridge.

The bride and groom with their parents

On a brisk January Sunday morning in 2002, Wat Thai Los Angeles started its busy Sunday a little bit earlier than usual. The bride, the groom, and the guests had arrived and they were getting ready for the brief version of a traditional Thai wedding ceremony.

And thank goodness that we opt for the brief version. We skipped the traditional groom’s procession part, and STILL took us 2 hours to go through the motions!

And to think out in the Thai countryside and back in the days, wedding goes for DAYS!

Traditionally, the groom and his family along would travel to the bride’s house to present Kahn Mahk, wedding presents and dowry. A few klong yao (long drums), cymbals, and dancers sometimes are a part of the procession. The bigger, the better it seems! The groom has to go through a silver gate and a golden gate, usually silver and gold-colored chains held up by the kids in the families, to get into the house and to the bride. Oh I don’t know how much the rate is for toll these days. B100 each kid? The rate is more inflated in the city, I’m sure.

Anyways. We didn’t do any of that especially because Brandon wasn’t bringing in the dowry. Hehe. The party just congregated at the temple for the ceremony. Our guests were seated in chairs opposite from the monks. Traditionally, everyone would be on the floor, but of course, our group was composed of mostly farangs so we had to provide the chairs.