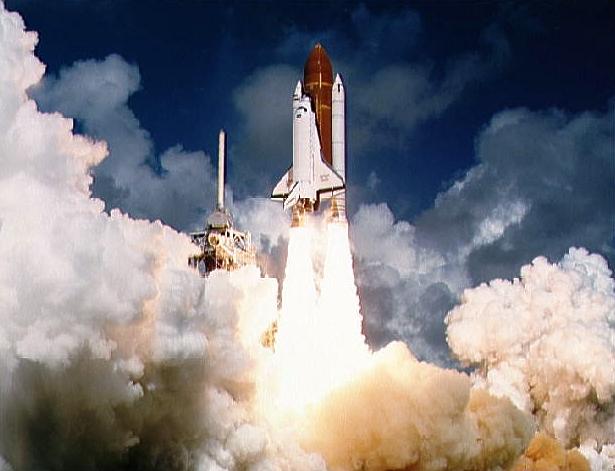 -shouts the Metro Express headline as I grab a copy and hurry into the station to catch my train. Once again American and the World is caught up to watch – held breathless- as mankind leaves the Earth behind. Despite dangers and risks and those that we have already lost the space shuttle Discovery finally launched again into orbit as we reach for the stars and endless dreams of what is out there.

Earlier this summer I took my Thai friend Bo and some of his friends from Bangkok on a tour of the monuments and museums here in DC. We got on the subject of the Air and Space Museum where I used to work among all the very cool and actual artifacts, planes and spacecraft that have made history. We even have a Space Shuttle on display now in the museum! I wondered out loud how long before there is a Thai astronaut.

Deep silence and strange looks passed between Bo and his friends before they started laughing.

What was so funny? The Japanese have had astronauts go into space with NASA and so has China. In fact both countries are almost ready to send spacemen into orbit on their own, why not Thailand?

“Thai people aren’t into that” Bo said but the subject was dropped and changed to a chorus of “I’m tired” and “It’s too hot” and “We walk forever where can we get a drink?” before I could ask why he said that….

Perhaps Bo and his friends ‘twenty-something’ generation may not dream of going to the stars when they gaze up in the sky at night but there is always hope for the next generation. Recently some Thai scouts for the first time for SE Asia got to talk by radio to real life astronauts on the International Space Station. Who knows what Thai boy or girl may be inspired today to reach for the moon tomorrow and one day actually land there.

Imagine what that might be like with Thai people in space. I can picture Muay Thai in zero gravity, those lethal punches and graceful kicks even more graceful and beautiful in slow motion like the space ballet scene from the movie 2001: A Space Odyssey. Also I figure if Thais know how to handle using a real Thai style toilet then when you have to go to the hong nam (ห้องนำ bath room) in space won’t be a problem!

Actually many of you may be surprised to know Thailand has already made it into space and has in fact traveled beyond our solar system on a path that will one day leave our own galaxy! Wanna bet me?

NASA launches Voyager 1 and Voayger 2 the first space probes on a mission intended to travel to Interstellar space.

I was 14 years old then and to hear that it would take 30 years for Voyager to leave our Soar System seems like a life time, and it was, but lifetimes catch up with you and before you know it 14 turns 41.

I remember the coolest thing about Voyager was the Sounds of Earth. A phonograph record put on each of the Voyager spacecraft. The recording was fitted on a 12-inch, copper disc containing, among other things “greetings from Earth people in 60 languages, samples of music from different cultures and eras, and natural sounds of surf, wind and thunder, and birds, whales and other animals. The record also contains electronic information that an advanced technological civilization could convert into diagrams, pictures and printed words, including a message from President Carter. (Courtesy NASA)”

A interstellar hallmark greeting card to anyone that might be out there listening! As you may have guessed one of the greetings recorded on the disk is in Thai which you can listen to here.

Of course I didn’t know anything of Thailand back then I was just intrigued by the ‘fully correct’ drawings of a naked man and woman on the disk to show what we humans look like. Racy stuff! Hey, it was the 70’s and I was 14 we didn’t have Cable TV or the even Internet invented yet!

I wonder if someday another race finds that disk and plays it. Would they send it back if it also had Disco on it? It was the 70’s back then kids. 😉

Would the aliens learn to speak Thai? Could they from one simple greeting? How advanced would they be? They would probably study to learn all Earth languages so they’d get lucky with at least one! Would they be intrigued in us enough to come here? Or maybe just intrigued in the pictures of us (hey maybe it gets reeeeeal lonely out there in space na) I also wonder what else would be different…

Would they need their own gender pronoun other than ‘Krap’ and ‘Kha’ to say hello? “Sa-wa-dee kruyynrxxx!”

Would they like Thai food? Would they prefer ‘farang’ phet (เผ็ด spicy hot), Thai phet (เผ็ด มากๆ really spicy hot!) or would we need a whole other category all together?

Maybe Aliens have already been here a long, long time ago before the first proto humans eyes would have seen them. I doubt we’ll know for sure in our life time whether or not we’re alone out here. After all this time Voyager is just now leaving our cosmic shores to begin crossing one very big intergalactic ocean. By the time another life form discovers our presence out there and they find their way here to say “Hello” “Sawasdee” or “Geuden tag” mankind could long since be turned to dust, the very material that makes up the stars and heavens itself. Our civilization long since disappeared, except for maybe Disco still bouncing around on radio waves out there. 😉

6 responses to “Would Aliens speak Thai?”