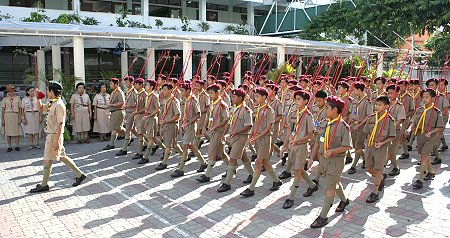 On July 1st, students and teachers from schools all around the country took part in celebrations marking the anniversary of the foundation of Scouting in Thailand. Scouting was first introduced in Thailand on July 1st 1911 by King Rama VI. Thailand was the third country in the world to take up Scouting. King Rama VI received his education in England. He was the first Thai monarch to have studied abroad. He graduated at Oxford University and also attended Sandhurst Military academy. He brought back with him many new ideas that he had seen. In Thailand he established the “Wild Tiger Corps” for adults and created a junior branch which continues today as the Scouts. King Rama VI is fondly remembered as the “Father of Thai Scouting” and every year on Scout Day, on July 1st, Scouts pay homage to his image and take part in parades.

Thailand is the only country in the world where Scouting was directly founded by a monarch. It is also honoured with being one of the Founder Members of the World Organisation back in 1922. Thailand probably also has one of the largest memberships because it is compulsory for every student to become a Scout. At our school, Thursdays are Scout days and the students come to school in their Scout uniform. During assembly they have inspection and then in the afternoon they have a Scoutlesson. At the end of each term there is a written exam.