My First Birthday in My New School!

I was so happy when I knew I could get a quota to study in Triam Udom Suksa School. Although, I was worried if I couldn’t get along well with others or couldn’t catch up their intelligence but it turned out to be the opposite. I enjoyed it there although it was just my first days at the school. When one semester passed, it was time for every school here to start preparing for significant coming event, “SPORTS DAY!!”.

Mostly, we’ve got sports day during semester 2 of a year around November – December. Most schools have it here, high schools, junior high schools, primary schools or even kindergarten schools. We are always seperated into 5 or 7 parties (colors) approximately. My first year in Triam, I was purple. Don’t think I was a widow (Thai people believe purple is the colour of a widow) or a gay (international belief) but I got no choices to choose! 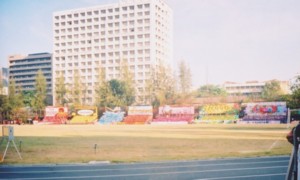 At the end of semester 1, seniors had to find people who would be interested in any sports competitions including cute girls and guys to be cheerleades as well. Everybody chose what they wanted to do, some were cheerleaders, some were at cheering sections (singing), some chose to do nothing..I chose to run.

Not so long after semester 2 started, people started to practise..a lot! (According to the pictures, you may see it’s a war time here at my school.) I was asked to start warming up and down and running on 11th December as the first day. You know what? That’s my birthday!!! I felt totally fresh and ready to practise. I went down to the tracks as the first person. I warmed up vigorously. Then people started to come and at last ..we warmed up together again and started to run. I was set in a team of four girls.. 4x100m. I was the first person to start. Teacher was there timing us so I ran as fast as I could ..arriving ..arriving.. BANG!!!! I hit the second person.. she didn’t know she had to start running before I reached her..She just stood there watching me coming. – -” She said sorry and left. The teacher told me to start it again but I felt like I couldn’t move. My right foot was so painful cuz it hit the back of that girl’s right foot (her shoe actually). Imagine you or something..coming with the great velocity and was stopped by something hard! I stood there for a few seconds then fell down.. I quickly took of my shoe to see if my foot was alright. Was taking of a sock slowly..slowly..almost..almost..

“GREY NAIL!!!!” was what I discovered on my right toe! I wasn’t stupid like I always am that day..I didn’t think I got some silver growing on my toe. I knew it was blood stuck inside straigh away! I went to sit for a while then it began to be dark grey and black at last :'( I asked the teacher what to do but he seemed careless to me. He told me to go to the nursing room. I did. I got something cold on my toe to cure it but I felt much more pain. The lady there told me to go to the hospital then. So I went to the hospital.. with my friend, Prae. Just two of us.. paid for the taxi ourselves and I couldn’t ask for money I had paid for the doctor from anyone :'(.

I got my nail pierced and the blood gushed out like there was a little fountain on my toe except it was red lol! My birthday seemed to turn out pretty bad. My foot ached.. I couldn’t run that year but God’s never been mean to us. While I was so in pain, I always walked like a toddler in order to let everybody in the streets realize “I’m hurt over here! Don’t step on my foot!”. I could get a seat on both sky train and buses 😀 cuz people felt pity for me. Although it was a lot less painful but I still walked lopsidedly :p cuz the bus was always crowded and I wanted to sit! :p

I felt good about it..it’s like a cool experience lol!! Really, you’d better try! JK!! Anyway, I got the golden medal in my second year instead 🙂 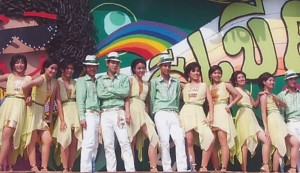 One response to “My First Birthday in My New School!”