Today, I will give you one final extract from the excellent book called “Phra Farang” by Phra Peter Pannapadipo. Here he describes what it was like to go out on the streets for the first time: 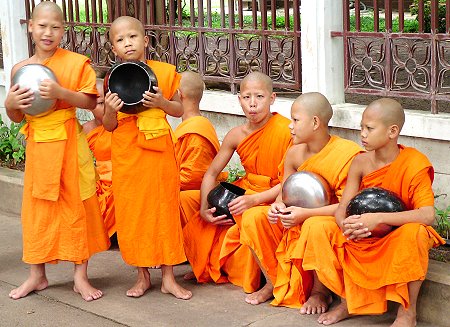 “Even though I am usually a very shy person, I was desperate to walk in the streets as a monk and show myself off. This was pure vanity of course and I knew it even then, but I had to start learning to be patient. Happily, after a few days, Phra Maha Laow decided that I was probably able to behave myself reasonably well and he suggested we should visit Wat Phra Kaew, the Temple of The Emerald Buddha, which is only a short walk from Wat Mahadhatu. With my robe properly arranged for walking outside, my totally empty yarm placed on my left arm, and my new and somewhat less-than-stylish plastic sandals with the irritating squeak doused with water to quieten them down a bit, we walked to the gates of Wat Mahadhatu. I was tremendously and unreasonably excited about my first ‘public appearance’ though of course I could not let my excitement show. Phra Maha Laow had instructed me that I must walk slowly, calmly, with eyes downcast, being careful not to brush up against anybody.

“But Phra Maha Laow, how can I avoid brushing up against people if I’m looking at the pavement?”, I asked. “Don’t worry”, he said, “They’ll see you”. And see me they did. We must, I suppose, have presented a curious spectacle. Phra Maha Laow is very short, even for a Thai, and I tower over him. It is actually quite impolite in Thai society and especially in Thai monk society, for a junior to have his head higher than that of his senior, but there was little I could do about that except to walk a few paces behind him. Unfortunately being tall I also have a problem about walking slowly. It’s not that I walk fast, but my legs are so long that I take huge strides. I tried to walk more slowly by shortening my strides but I found this quite awkward and ungainly, so Phra Maha Laow was constantly whispering to me to slow down as I was frequently close to overtaking him.

“Almost the instant we stepped over the threshold of Wat Mahadhatu, I heard someone say “Phra Farang”–foreign monk. The first of dozens of times that day and the first of many hundreds of thousands of times since. Phra Farang … Phra Farang … Phra Farang. Even many Thai People who know me quite well, frequently refer to me as Phra Farang rather than as Phra Peter and I have never understood why, not that I care really. I know that many Westerners who visit Thailand feel quite insulted when they are referred to as ‘farang’, though the Thai people rarely use the word in an insulting way. I have been told by a linguist that Westerners may find the word insulting because it has two syllables, like many of the racially insulting words or taunts that are used in the West. But I wasn’t insulted, I was proud to be a Phra Farang. As we walked people smiled at me. I smiled back. In fact I positively beamed until a warning glance from my teacher made me lower my eyes and fix a more neutral expression on my face. But I couldn’t keep my eyes downcast for long, not with so many lovely Thai smiles being offered to me. 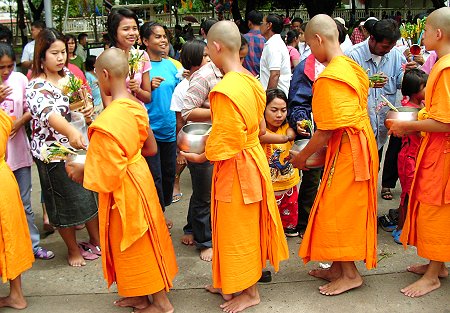 “We certainly didn’t have to worry about brushing up against anybody for although the area around Wat Mahadhatu was at that time a market and the footpath was crowded, the crowds simply parted to let us through. “Phra Farang…..Phra Farang…..Phra Farang”. Besides smiling, many people also offered me a very graceful wai as we passed–a lovely Thai gesture of both greeting and respect, in which the palms are held together as if in prayer and the finger tips brought up level with the nose.

“Of course, my vanity and ego were so inflated by all this that at the time I didn’t realise I might just as well have been carrying a big placard saying ‘brand new monk’. My head was newly-shaved and shining brightly, whereas Phra Maha Laow’s black hair had grown noticeably since the last general head-shaving day two weeks before. My robes still had their brand new sheen and creases, like an unironed new shirt, and although I tried to walk like a monk, it must have been obvious from the way I kept having to hitch my robe onto my shoulder, and my whole general demeanour, that I was new at all this. That didn’t stop people smiling or wai-ing of course, for in my experience, Thai people are usually genuinely delighted that a Westerner has chosen to follow Buddhism and has become a monk in their country, even though they often don’t understand why.

“But a monk like Phra Maha Laow, with more than 15 years spent in the robes, has developed an air of serenity that cannot be falsified. It cannot really even be learned–it is a reflection of true inner peace and comes from a genuine understanding of what the Buddha taught and from long practise of Buddhist meditation techniques. Thai people seem to instinctively recognise this natural serenity and I didn’t have it. None of that occurred to me at the time. There I was, in my lovely new robes and my lovely new hair cut, walking on the streets of Bangkok while total strangers smiled and paid their respects to me. Oh, I was the bee’s knees! But not for long…… ”

If you want to read more, then I think you should buy the book. It is certainly worth it. The good news for people living in England is that it has recently been published there.

We are very close to Songkran now. Tomorrow I will be back at my school to take pictures of the students making merit by giving food to the monks. They will also be pouring rose-scented water over a Buddha image and over the hands of their teachers. Once these formalities have finished, they will partake in a more free-for-all water fight in the playground. Later in the week, I will be sharing pictures with you of the Songkran parade, Thai families making merit and also building sandcastles at their local temples! I will, of course, also have some pictures of some of the waterfights. Next week, there will be lots of pictures of Panrit’s ordination as a monk and then his subsequent life in the temple after that. Then the following weekend I will be crossing the river to Phrpradaeng to get a second dose of the Songkran festival. The Mon people in the West of Samut Prakan celebrate songkran a week later than everyone else! Then I have also got more food pictures to share with you as well as some more Thai superstitions! So, a lot to come over the coming weeks.

Getting Ready for Songkran 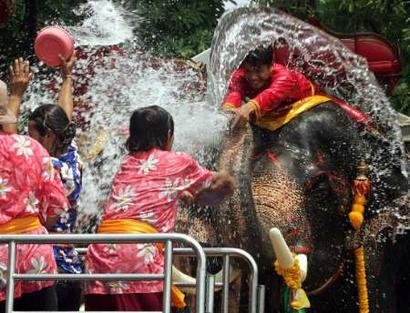 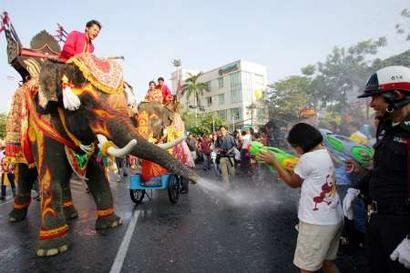