How to Put on the Monk’s Robes

Last night I started re-reading an excellent book about life in a Thai monastery. It is called “Phra Farang” by Phra Peter Pannapadipo. If you are interested in Thai Buddhism then it is worth getting. I have typed up an extract for you below which quite nicely shows you the difficulty he experienced dressing himself in robes.

“The first thing any new monk needs to know is how to dress himself. I had exchanged clothes kept up and held together by zips, belts, buttons, press-studs and Velcro for a large rectangle of cotton and unless it was actually tied in a knot somewhere, I couldn’t see how it could stay on. Often mine didn’t. It didn’t only fall off, it actually seemed to leap off me. I was familiar with monk’s robes from my years at the London temple and had often seen monks wrap themselves in their outer robes, but it always seemed to be done so quickly that I still hadn’t a clue how to do it myself. Of course, I had never had the opportunity to wear one before. I think any monk would be genuinely horrified if a layman put on the robes, even for practice, before being properly ordained.

“In modern times, the monk’s wardrobe consists of his outer robe civara (jivorn) and an under-robe antaravassaka (sabong) that is worn around the waist, covering the navel and falling to just below the knees. The sabong is held up by a fold and a tuck and a cord belt. On the top part of his body, under the jivorn, is worn a sort of sleeveless one-shouldered waistcoat (ungsa) which is joined together on the left side by tying tags. For religious services inside the monastery, the monk also wears an additional robe (sanghati) which is folded in a very particular way into a long rectangle and hung over the left shoulder. The monk may or may not wear sandals, depending on the tradition of his particular monastery, though most do. He may carry a soft bag, called a yarm, which is like a shoulder bag but which is carried in the crook of the arm and should never be worn on the shoulder or slung over the back.

“The robes come in different sizes and nowadays are usually made of cotton, silk, nylon or some other man-made fabric, but they are always cut to the same pattern and design. They are actually made from many pieces of cloth sewn together in, according to legend, the pattern of the paddy fields of Magadha in Northern India. They are made in many pieces to recall the days when monks made their own robes from bits of cloth found in charnel grounds. The size and way of wearing the outer robe has changed since the Buddha’s time and may vary a little from country to country, but however it is worn, the monk should always look neat and his body should be well covered. “In Thailand the jivorn is large and is generally wrapped around the body with the two ends rolled together. This roll is taken over the left shoulder and under the left arm so that its end can be held in the left hand or pressed firmly between the arm and the body. Inside the temple the robe is worn so that the right shoulder is exposed, but outside the temple both shoulders and arms are covered. The colour of the robes varies from monastery to monastery–at Wat Mahadhatu they are a reddish-brown but at others may be anything from very dark brown to brilliant yellow, or even ‘day-glo’ orange.

“On the morning after my ordination I got up at 5 am and tried to dress myself in my outer robe in preparation for breakfast in the section. Then I tried again. And again. The breakfast bell rang and still I seemed to have either too much robe left over or not enough. Chanting from the dining hall signalled the end of breakfast and by then I was in an absolute sweat and still looked like a sack of potatoes, with lumps and bumps and bunches of cloth exactly where they shouldn’t have been. One moment the bottom of the robe was at knee height, the next flapping around my ankles. Wrapping the outer robe is actually not a difficult task–once you know how–but I didn’t know and I found myself getting intensely irritated. Each time I tried to wrap the jivorn it looked worse than the last time. Even in the early morning my tiny room was stiflingly warm and both my robe and I were wet with sweat. I was quite close to tears of anger and frustration.

“‘Calm down, calm down’ I told myself repeatedly. One of the problems was that I am six feet tall and the ceiling of my room was only inches more. To get a neat roll of cloth to pass over my shoulder, I needed to raise my left arm quite high while rolling the ends of the cloth together. As my room was on the top floor, I eventually clambered out onto the roof, where I had sufficient space to get the robe wrapped around me in something vaguely approaching the correct way, but only very vaguely. I looked a mess and the pigeons were not impressed. Phra Maha Laow’s room was in Section 24 at the other end of the monastery, but I managed the distance without anything falling off and he was able to dress me neatly in seconds, as well as offering me his breakfast ‘left overs’. 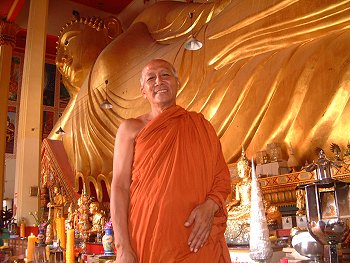 “I think my biggest fear as a new monk was of my under-robe falling down in the street. The sabong is held up by a one and a half inch-wide woven belt with two very long cords. The belt and cords are passed around the waist twice and the cords are tied in a bow at the front. The cords are a bit like over-sized versions of round, nylon shoe laces, which I never found stayed tied together as well as the old, flat cotton type. Many monks, including me, wear a key ring at the end of one of the cords and if the ring has several keys on it, they make that end quite a bit heavier than the other–enough to gradually pull a poorly-tied bow undone.

“In my first month as a monk, this happened to me as I was descending a very rickety staircase, when for safety I needed to support myself with both arms outstretched. As I came down, I felt an unusual movement under my jivorn and was horrified when my belt slipped down past my knees and around my feet. I knew the sabong wouldn’t be long after and it wasn’t. I couldn’t make a grab for it because I would quite likely have fallen down the stairs, which would have been even less impressive to the group of Thai people who were waiting at the bottom to come up. I sort of hopped out of my sabong, calmly gathered it up, put it in my yarm and walked away with as much dignity as I could salvage.But at least I didn’t expose myself to total ridicule as I did on another occasion.

“At that time, I was living in a remote country monastery and had to shift some very large rocks. Being in an isolated part of the grounds and as I was working alone, I had taken off my outer robe and ungsa, just leaving my sabong wrapped around me. Staggering under the weight of a huge boulder, with my body arched backwards, I didn’t notice that my belt had come adrift–until my sabong started to slide down my legs. There’s not a lot one can do when both hands are full of boulder and before I could drop the rock, my sabong was around my ankles, leaving me totally naked (except, perversely, for the belt, which was still hanging loosely around my waist). I had thought I was alone but loud screams of delighted laughter from behind a bush told me that, as usual, some of the village children had come to see what the strange foreign monk was up to. After that, I started to tie my belt so tightly I often gave myself stomach ache!

“I’m not sure at what point dressing myself neatly and securely became second nature, but of course it did eventually and now I can’t see why I ever thought it was such a problem.”

Tomorrow I will give you an extract of what it was like for him to go out on an alms round for the first time and the reactions he got from the local people.

3 responses to “How to Put on the Monk’s Robes”