Let’s have a bit of fun trying to guess what the food is in these pictures. Some you might guess without ever having set foot in the Kingdom of Thailand

(1) This first one is an easy one. They sell a lot in our city of Paknam. As you can see it only costs 5 baht per stick. What is the dried snack at the back of this picture? 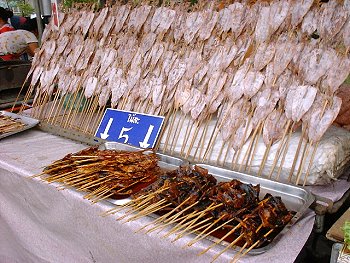 (2) These ones are a kind of pancake sandwiches. Can you guess what the stuffing is? 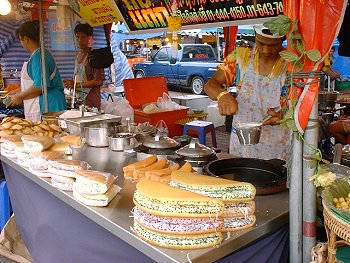 (3) This is one of my favourites. First had it while in India though the Thais have adapted it a little to their own tastes. What is the name of this snack? 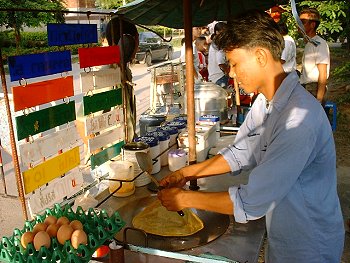 (4) This last snack is being deep fried. It is not really Thai but popular at fairs. The sharp pointy stick is a big clue! 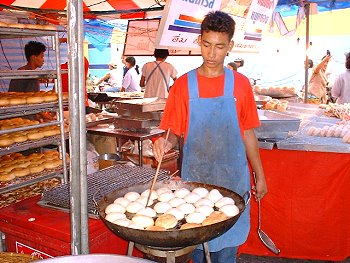 If you think you know what the food is, make your guess by clicking on the “comments” link below. You don’t need to register in order to post a comment.

Ever since reading Tin-Tin in Tibet whilst still in the final years of Primary School I have always had an interest in everything foreign and especially of Asia. Before I even stuttered out of my homeland, I had already been wisened up to the recent history of the continent and in particular, Indochina. I can recall even today as a child pitying the war-ravaged country of Kampuchea and donating some of my pocket-money to Blue Peter and Oxfam on the country’s behalf. 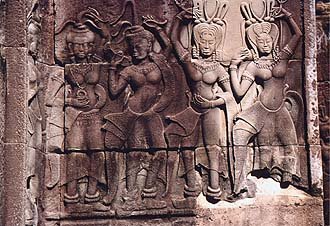 Til this day it is a country still suffering a hangover from the countless years of carnage. I found the Khmers generally to be rather xenophobic and racially discriminative people, especially towards those of Chinese and Vietnamese blood. It is kind of ironic however that is was in fact the Vietnamese themselves who way back in 1979 finally put an end to the horrific reign of the Khmer Rouge, I can only guess they overstayed their welcome.

As for Thailand in their eyes, the Khmers are certainly not as anti-Thai as what the Thai media has made them out to be, but instead I had many Khmer friends who longed and could only dream about visiting the big mango of Bangkok or the sea-side resort of Pattaya. Most of the Khmer I soon realised, didn’t embrace the ‘Barang’ (Farang) with the open-armed enthusiasm as their Thai neighbour. Only on understanding though, their recent history of occupation, intrusion and interference by foreign powers can we be brought to comprehend more clearly, the Khmer mind.

The modern Khmers do have a keen fondness for everything American, which fortunately the Thais gave up on long ago. I found this to be rather surprising though, in the sense, as it can argued, that the worst of all the intruders were, as a matter of fact, the Americans. I also noticed the Khmers to be of a quite suspicious nature in regards to out-siders, however this mentality can be understood when looking back to what the people had to live through during the turbulent years of the Khmer Rouge. There is no family I doubt in Cambodia that didn’t suffer one way or another.

There is a massive gap in Thailand between the rich and poor but still that gap is nothing to what is seen in Cambodia and surely that’s where many of the seeds of the discrimination lay. The Chinese-Khmer of Phnom Penh are stinkingly rich in contrast to their Khmer counterparts. Even the scraggiest caucasian English teacher, for example a French guy with the roughest accent, holding no teaching credentials or experience can still find the odd teaching job at $5 an hour compared to a well educuted Khmer, who fluent in English and perhaps holding a Masters Degree in the language will get just $3 an hour.

While many of us wait for the end of the month to afford a new mobile or pair of shoes, and even the poorest of farmers here in Thailand can afford at times to purchase just the smallest of household necessities, the Khmers are happy to just have a bowl of rice in their hands at the end of the day. 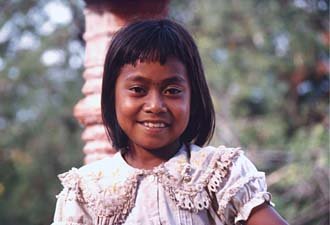 I was impressed by the ingenuity of many Khmers in making just the smallest of livings. Just coming from Poipet on the Thai border you will be taken aback almost instantly by the atrocious state of Cambodia’s roads and to make matters worse some of the local kiddies have devised a way to make money. Owning a couple of big strong planks of wood they spend the night digging up a deep hole which by morning is unpassable for any vehicle. The motorist can do nothing but use the services of the kiddies at 5 baht to borrow their planks of which to get across.

I found learning Khmer pretty easy as the grammatical structure and usage of colloquialism was almost identical to Thai. For example when the Khmers greet each other they will say Have you eaten yet? Or on leaving ‘I will go first’ pretty much the same as Thai. As in Thailand, most of the ex-pats out there could hardly speak a word of the language even though they had been there for 5 years. And as a matter of fact I managed to anger a couple of them when on asking me how many years I lived in Cambodia, I would answer 4 or 5 months. They presumed I was making a joke at their expense as I could speak pretty good conversational Khmer within just a few months to the ex-pats disbelief. My problem though of speaking Khmer was that since I was thinking in Thai I spoke Khmer tonally and so all the Khmers laughed at the way I spoke Khmer with a Thai accent. I just couldn’t get rid of it.

I found the local food, to be ‘all right’ but the blander taste didn’t really suit my fiery mouth which had become accustomed to much more flavoursome Thai food. It didn’t take me long before I was seen carrying a small bottle of fish sauce to the local restaurants I ate at. Even their noodle soups are similar to the bland style of Chinese and Vietnamese. The standard of the Western/Indian food however was excellent and after a while most of the ex-pats would eat nothing other than Western for breakfast, lunch and dinner which would set you back about 400baht a day compared to in Thailand where you can get away spending no more than 60-100 baht a day eating out alone.

Phnom Penh it has to be said is a ‘dangerous’ city 24 hours a day. During the day the roads are cursed by barbaric drivers roaring up and down in every direction, driving like mad monkeys. Then, as night falls the streets are virtually unwalkable and the only 90% safe way to get around is by ‘motodop’ and even then you ought to know and be able to trust the guy. I remember a typical story of an English teacher who being on the alcoholic side had difficulty controlling himself after a couple too many. One night while crazily walking home alone at 2 in the morning he was robbed at gunpoint, then a few nights later while carrying his last 20 dollars til pay day was faced again with a couple of armed assailants who again asked for him to spare them his money. To this, the ‘nut’ replied ‘No’, luckily he wasn’t shot dead but did receive a very nasty blow to the head from the butt of the gun which needed quite a few stitches. 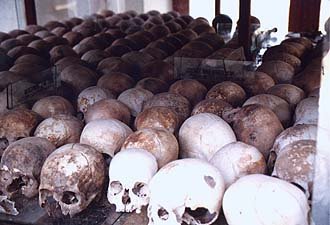 Then a couple of days after that, he came off a motodop downtown Phnom Penh and a 6 wheeled lorry shaved his head taking away half his ear, miraculously lucky not to have been killed. Even my boss was robbed coming from the bank one evening right outside his house where the robbers asked not only for his money but also his glasses and English books! He was fortunate not to have lost his motorbike too as he was wise to toss the keys into the front yard when he saw them approaching. Then finally, there was an English friend of mine who on running a small bar/restaurant had problems with his rowdy neighbours, employed a policeman as security guard for the nights.

One night shortly after, his security guard got into a disagreement outside of work and that night an enemy driving past in his bike, threw a grenade at him while he was guarding my friend’s restaurant. The grenade missed him but landed in the restaurant and killed the Englishman’s wife and very almost his son. The name of the restaurant was ironically ‘The Peace Café’

At the end of the day however, Cambodia is a fascinating place to visit and Angkor Wat is a definite ‘must go’ for anyone living in Thailand. The colonial style buildings of Phnom Penh are magnificient and the history of the Khmer Rouge, relived at a few places will brings a tear to the eyes of even the hardest-hearted, affording you a glimpse of reality to just lucky you are.

When asked why I had left Cambodia and won’t go back to live in Phnom Penh again is because one, it is too dangerous for me and secondly the wild-west attitude of the expats living there.

I would have no second thoughts of going back for a vacation though.

Xenophobia = the fear of foreigners
Ironic = a strange/unexpected or even nasty situation that reads amusingly/sarcastically
To long for/to = to wish for/to
Barang (Khmer lingo) = Farang
Turbulent = a period of time of big change/violence or even war.
Massive = very big
Stinkingly = extremely
Caucasian = a person of white race
Atrocious = very bad
Colloquialism = spoken part of a language
Expat = expatriate, a complaining farang that lives permanently in a foreign country.
Barbaric = unruly and uncivilised not too different from what you see back home.
Moto-dop (Khmer Lingo) = Moterbike-taxi.
Rowdy = noisy